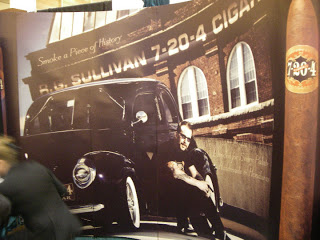 At the 2010 IPCPR Trade show, Kurt Kendall’s 7-20-4 line caught the eye of a lot of retailers and manufacturers at the show. The 7-20-4 stick started in Kendall’s Cigar Store(s) – Twins Smoke Shop in New Hampshire.  The cigar was named after an older line that started about 100 years ago, but went defunct.  The name 7-20-4 comes from the address of where that original stick was made – 724 Elm Street.  Kendall basically resurrected the line.   Following the success of this cigar, it became natural for folks to wonder what was next.

Over the past 24 hours some information has come forward via Facebook and New Havana Cigars on the follow-up cigar – the 7-20-4 1874 series.  The significance of the 1874 is that is the year the factory opened.

We know some details on the blend and we do know the sizes that are being unveiled:

The show will be launched at the 2011 IPCPR Trade show next week.  As more information becomes available, I will post it.