Eddie Ortega has become one of the more popular figures in the cigar industry.  Earlier this year, Ortega announced he was leaving (on good terms) EO Brands, a partnership he started with his friend Erik Espinosa.  EO Brands had became widely known for their popular 601 line of cigars.   Much of the reason for the split is that Ortega wanted to operate as an independent.   Therefore he formed Ortega Premium Cigars and soon afterwards launched his debut cigar- the Ortega Serie “D”.  Given that Ortega is a popular personality and a lot has been made about the launch of this new cigar, there has been a considerable amount of hype surrounding the “Serie D”.  I’ll admit, my first experience with the Serie “D” was a little underwhelming from a flavor standpoint, but my subsequent experiences have been much more positive.

For the Serie “D”, Ortega opted to go with a maduro box-press.  Back when Ortega was with EO Brands, the 601 Blue was a maduro box-press and is probably considered his strongest work to date.   Given Ortega has went in a direction where he had is greatest success, the comparisons between the 601 Blue and the Serie “D” are almost inevitable – even though they are different cigars.  Similar to the 601 Blue, for the Serie “D”, Ortega once again collaborates with the Garcia family My Father Cigars to make the cigar in their factory.

Going the independent route, Ortega has been careful in terms of rolling out the Serie “D” to brick and mortar retailers.  In fact, it took me some time to actually locate one of these cigars.   While this might be frustrating to me as a consumer, at the same time if you look at the bigger picture it’s a good thing.  The slower, selective roll-out protects many brick and mortars and helps control the tobacco supply a little better.

Let’s break down the Ortega Serie “D” and see what this cigar brings to the table.

One big differentiator between the Serie “D” and the 601 Blue is the wrapper.   For the Serie “D”, Ortega goes with the San Andres Mexican Maduro wrapper.   This wrapper has proven to be a very good wrapper when it comes to putting it through the maduro process.

For this cigar experience, I opted to go with the Rothschild vitola – the No. 6.  The wrapper is a classic San Andres maduro wrapper.  It has a dark roasted coffee color.   There are minimal wrapper seams, and virtually no veins.  The wrapper is also not oily and is a little rough to the touch, but not bumpy   The cigar itself is a well-packed box-press.

The band features a combination of green, red, gold, and white coloring.   The top part of the band has a red background, while the bottom half has a green background.  The name “Ortega” is in white cursive-like font on a red background.  In smaller white font and also on the red background is the text “Serie “D””.   There is also gold trimming around the cigar.

There is a little bit of innovation on the band as the back features a UPC code.  From speaking to several retailers, they applaud this move as it makes their lives easier when pricing.  Given that Ortega has somewhat garnered a technical-savvy reputation in the cigar industry (I can’t say if it is true or not, but he is very active on twitter and facebook), this doesn’t come as a surprise that he has been able to implement this innovative concept. 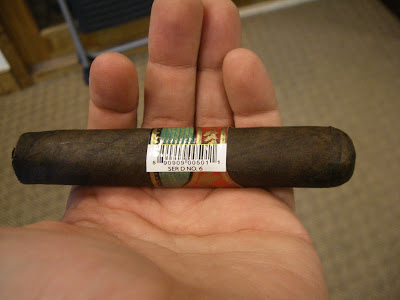 With my Ortega Serie “D” No. 6,  I went with my usual straight cut into the cap.   I commenced with a pre-light draw and was treated to flavors of leather, roasted coffee, and spice.  Overall, I assessed the pre-light draw was satisfactory.  At this point, I was ready to fire up my Serie “D” No. 6 and see what the smoking experience would bring to the table.

Earlier, I mentioned my first experience with the Ortega Serie “D” was a little underwhelming from a flavor standpoint.  Since then, I’ve had a couple of more and am more likely to treat that first sample as an isolated incident.

The initial draws of the Ortega Serie “D” treated me to a classic Garcia pepper blast.  This was one of the more predominant pepper blasts I’ve had in some time.  While the pepper did settle down with this cigar, it maintained a presence in this cigar from start to finish.   After the pepper subsided, there were notes of leather and coffee that emerged.  In a lot of ways, after the pepper blast this was more like a bolder version of what I got on the pre-light draw.

Around five percent into the smoking experience, I detected some sweetness on the Serie “D”.   This sweetness appeared to be more berry-like.  I’ll admit, on my first smoke of the Serie “D”, I did not get this berry flavor, but on the subsequent smokes I did.   The berry, coffee, and leather notes fused very nicely.  While these notes fused together, the pepper notes were almost “layered” over those notes.   It created almost a three dimensional effect with the flavor profile

In the last third, the pepper notes took on more qualities of a baker’s spice.  The spice and chocolate notes were present until the finish.  Each time I smoked the Serie “D”, I found the finish a little rough, but not overly harsh.   At the same time, on each smoke, I also got a nub that was cool in temperature and firm to the touch.

The construction attributes of burn and draw of the Ortega Serie “D” No. 6 scored very well each time I smoked this.  In fact, I’d go as far to say it scored perfect for these categories.   It didn’t take many touch-ups to keep the Serie “D” burning sharp from start to finish.  The resulting ash was firm and white.   The burn rate and burn temperature were ideal.   The draw was effortless – making the Serie “D” a very enjoyable smoking experience.

From its dark roasted coffee wrapper, my original perception of the Serie “D” was that this was going to be a strong and bold smoke.   This would not be the case.  The Serie “D” is not going to overwhelm you with nicotine – making this a classic medium strength smoke.  The flavor notes were not very bold, and I assessed the Serie “D” to be medium-bodied..   This is my one complaint about the Serie “D”.   I have no issue with a medium-bodied smoke, but in the case of the Serie “D”, I felt this could have really been a home run as a full-bodied smoke.  I will say, the strength and body balance each other nicely as one attribute does not overpower the other.

Up front, I did draw a comparision to the 601 Blue.  While this is a different blend, in the end I still think the big question will be how does the Ortega Serie “D” stack up with the 601 Blue?   It does fall a little short in my book, but that doesn’t make the Serie “D” a bad cigar.  We also have to realize while both are box-press maduros – both are very different cigars.   The construction of the Serie “D” was simply outstanding.  It did deliver some good flavors, but ones that I would have wished were a little bolder.   This is still a cigar I’d recommend to both novice and experienced cigar enthusiasts.   Novice cigar enthusiasts who might want to sample their first maduro can cut their teeth on this one – and be very pleased.  Experienced cigar enthusiasts looking for a high quality medium strength, medium-bodied maduro will be pleased with this one.  Overall, the future is bright for Ortega Premium Cigars, and this cigar was a nice launching pad for the company.

Source: The cigar(s) for this assessment were purchased from Cigar 1 Lounge just outside of Miami, Florida.