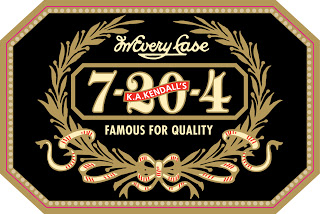 This summer will bring two new 7-1/2″ x 38 Lanceros in the 7-20-4 Cigars’ portfolio. Kurt Kendall has added the shape to both his original 7-20-4 line and 1874 Series, which he introduced last year. He plans to unveil another 7-20-4 blend and an entirely new brand this August … watch for the news release at that time.

Kendall states, “The slim Lancero shape is somewhat deceptive. Smokers expect a mild, almost delicate flavor profile and body. But surprisingly, its relatively small ring gauge delivers more body and fuller flavor than larger-diameter cigars of the same blend. Their medium body and full flavor are smooth enough for those who prefer a mild-to-medium bodied cigar, but the full flavor satisfies smokers who favor full-bodied cigars. They meet our company goal of being blended for every palate.”

The Lanceros are made by hand, of 100% long-filler tobaccos, and share the same wrapper, binder and filler as the other cigars in their respective lines. The 7-20-4 Lancero boasts a remarkable combination of six tobaccos. The wrapper is a Brazilian Mata Fina, aged five years. Its filler consists of three-year-old Colombian, Honduran, Mexican and Nicaraguan tobaccos, and the binder is Costa Rican. “The result,” says Kendall, “speaks for itself, in the many top reviews it has gained over its three years in the market.”

The 1874, named after the year the original 7-20-4 company was founded in Manchester, New Hampshire, has a filler from Nicaragua’s Jalapa Valley, an Indonesian binder, and a Habano wrapper. Its wrapper and filler are aged five and four years, respectively. Kendall attributes all his cigars’ sophistication to this patient aging.

The Lanceros share extra construction features with all other 7-20-4 and 1874 shapes. They also incorporate the Cuban entubado bunching technique, in which their filler leaves are rolled individually into long tubes. This more painstaking method yields a filler that is virtually immune from the hard draws and plugs of conventionally-bunched fillers, usually caused by deformation during the mold pressing. Both Lanceros … like the rest of the 7-20-4 line, except for the Torpedo … are capped with a pigtail.

The construction and artwork of the Lanceros’ 20-cigar box presentations reflect the boutique-level quality of the two lines’ existing shapes … Cuban dress-style cedar boxes for the 7-20-4; cedar cabinets for the 1874. The cigars will be available at 7-20-4 Cigars’ retailers in July … see http://www.7-20-4.com/retailers/map for a Retailer Map. Manufacturer’s suggested retail pricing for each is $8.00.

Source: The press release was sent from Dale Scott who represents 7-20-4 cigars.  Cigar Coop prints press releases as a service to all cigar companies.