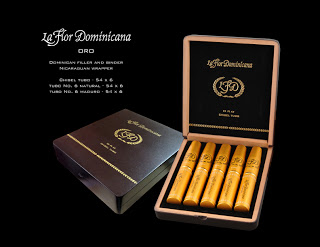 In reference to the Oro line, the press release quotes La Flor Dominicana’s Litto Gomez as saying “These cigars are an amped up Coronado blend, with dark Nicaraguan wrappers and Dominican fillers and binders from our farm in La Canela, Dominican Republic.”

The 7/24/12 Cigar Insider reports the Nicaraguan wrapper is similar to what La Flor Dominicana used for its Coronado blend.  The difference is the Oro will use leaves from a higher priming.

The cigars will be offered with two wrapper options, a natural and a maduro.

The cigars will be made in three vitolas, each a 6 x 54 sized cigar.  One of the vitolas will use La Flor Dominicana’s trademark Chisel.  The other two will be parejos.  One parejo will use the natural wrapper while the other will use the maduro wrapper.