July 25, 2012 (Scottsdale, AZ) — Cigar Tech is yet again revolutionizing cigar technologies. Following up on the launch of the revolutionary Shuriken Cutter at the 2011 IPCPR Convention and Trade Show in Las Vegas, a new and improved version of the cutter will be unveiled at the 2012 IPCPR show in Orlando. 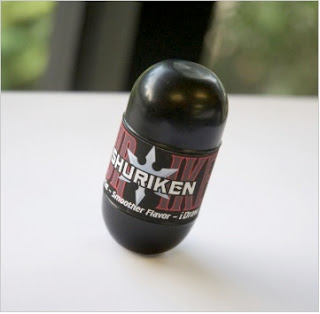 Chris Jones, the inventor of the Shuriken, could not be satisfied with the amazing feat of creating the only new type of cigar cut to be introduced in nearly a century; he had to improve upon it!  He made the blades thicker and made some adjustments to the blade carriage so that the slits can be adjusted merely with slight lip pressure, and the cigar does not have to be as far in the mouth as before.

“This makes the most amazing cigar cutter ever invented even more amazing!” said Belinda Doyle, CEO of Cigar Tech. “The response has been amazing even before this improvement,” Doyle added. “We have had a hard time keeping the cutters in stock at times and have stressed the capabilities of our American manufacturer. In order to address this issue, Chris has achieved some amazing manufacturing breakthroughs in the last year, one of which is the improvement of the blade assembly. Our blades, which were once inserted into the blade carriage by hand, will now be ultrasonically inserted, which insures speed and perfection. We can expect great things from this invention and others on their way.”

In addition to the improved blades and assembly, the Shuriken will also be getting some cosmetic upgrades for the 2012 IPCPR show. Composite models will now have a wrap around the entire cutter, making for a fantastic look and further reinforcing the brand.  The center wrap area also makes private label projects a possibility. Suggested retail price on the composite Shuriken is  $20.00

Anodized aluminum models will now be laser engraved with our Shuriken Dragon Logo and will have a suggested retail price of $35.00.

The alligator wraps that were part of the initial launch will be replaced by crocodile wraps, and a  very rich looking brown leather woven wrap will also be available. These models will also be engraved on the cap of the cutter and will have a suggested retail price of $40.00.

For fans of limited edition products, the Shuriken will be offered in a limited edition gold anodized model with beautiful etching, as well as a model made of solid titanium. Each has a suggested retail price of $60.00.

Doyle also noted that there are new line extensions on the horizon for Shuriken. The proprietary blade configuration of the Shuriken can be used for cutters of many shapes and sizes. “The sky is the limit,” she said.

Based in Scottsdale, Arizona, Cigar Tech is a company that markets the Ciguardian and Dr, RH brands of humidification products and accessories, along with the Shuriken cutter line.  Their state-of-the-art humidifying solutions, gel jars, humidifiers, and digital hygrometers are made to excel the highest standards in the industry. For more information and pricing on their products, contact Cigar Tech at 877-860-0415, or visit them online at www.cigartech.com.

Source: The press release was sent from Belinda Doyle of Cigar Tech  Cigar Coop prints press releases as a free
service to all cigar companies.