The Swag SoBe Edition is the third blend to be added to the Swag Cigars family.   The cigar was announced prior to the 2012 IPCPR, but had its official launch at the trade show.  SoBe stands for South Beach – referring the famous Miami Beach neighborhood.  As a part of the packaging, the cigar features a striking art deco blue banding scheme.  Recently, I’ve had a chance to sample this new blend.  I found this to be an excellent cigar – and one that strengthens the Swag Cigars’ line.

The original Swag Cigar was launched at the 2010 IPCPR Trade Show.  The cigar was our #19 Cigar for 2010.   Last year, a second blend called  the Swag Limitado ’99 was released.  That cigar (as the name indicates) features a special bale of rare Dominican tobacco from 1999.   Earlier this year, Oliveros Cigars formed Boutique Blends Cigars.
This new spinoff focuses
exclusively on the production and distribution of boutique brand
cigars.  Swag Cigars (along with Aging Room Cigars) were moved into the
Boutique Blends Cigar arm.

Since this cigar is based on pre-release samples, we will default to a pre-review to provide some thoughts and perspectives on the cigar experience.  When the cigar hits the retailer shelves, we will provide a final assessment rating and score.

The Swag SoBe Edition has been launched in four frontmarks:

For this cigar experience, I went with the Rothschild-sized VIP vitola.  The wrapper of the Swag SoBE VIP has a rich caramel color.  The wrapper has an oily complexion.  The cigar itself is bumpy to the touch.  There are some visible wrapper seams and visible veins.

As mentioned, the SoBe has a art deco blue color on its band.  It basically is a blue version of original Swag band that was red in color.  In white font is “SWAG” prominently displayed on the center.  Below that text is the text “CIGAR LIFESTYLE” in smaller white font.  There is a gold crown on the upper right of where the “SWAG” text is.  On the lower right of the “SWAG” text is the text “DR” sitting on a red square background.  The cigar also features red, blue, black, gold, and white striping across the top and bottom.

There is a secondary band on the foot.  The text “SoBe” is prominently displayed on that band in white font.  To the lower right is the text “Edition” in red scripted font.   There is a tissue wrap that sits between the upper and lower bands.  That tissue wrap contains the Swag logo in gold.  The tissue wrap is attached to the lower band.


Preparation for the Cigar Experience

For my experience with the Swag SoBe Edition VIP, I went with my usual straight cut into the cap of the cigar.  When I commenced with the pre-light draw, I detected notes of a cedar sweet-spice,  nut, and some notes of grapefruit.  Overall,  the dry draw notes of the SoBE provided a very satisfactory cigar experience.  At this point, I was ready to toast the foot and enjoy the smoking experience. 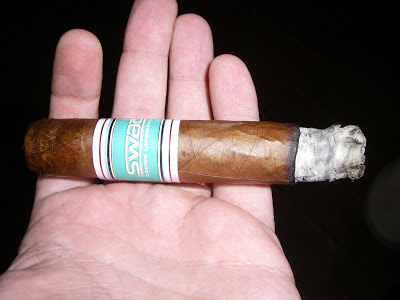 On the two samples I smoke, the draw was a little looser than I preferred.  Overall, this didn’t seem to have any adverse effects on the smoking experience.  I chalk this up more to personal preference than anything.

I found the ligero in this cigar to contribute to both the strength and body of this cigar.  From a strength perspective, I found this cigar had some nice pop to it.  I assessed the Swag SoBe to be medium to full in strength.  As for the depth of the flavors, the Swag SoBe delivers well here.  I assessed this cigar to be medium to full in the first half.  By the second half, it progressed into a full-bodied smoke.   I give the body a slight edge over the strength of this cigar, but its not a case where there is a huge differential between the two attributes.

On the Swag Cigars’ web-site, it says, “this is not your father’s Dominican Cigar….this is a new kind of Dominican smoke with the aroma, flavor and
combustion that Dominican tobaccos are known for but with strength,
complexity and character that until now has been found only in
Nicaraguan  tobaccos.”  From my point of view, there is no doubt that this cigar smokes like a Dominican puro, however the Swag SoBe has some nice bite to it.   In fact, I think it has more bite than the original Swag line does.   I think the 48 ring gauge works real well with this particular blend.   This is a cigar I’d probably steer more toward the experienced cigar enthusiast.  I’d also encourage those who enjoy Nicaraguan puros to give this cigar a try.  As for myself, I would definitely reach for this cigar again.

Source: The cigars for this write-up were provided by Oliveros Cigars. The request was initiated by Oliveros to myself (Cigar
Coop) to provide feedback.   Cigar Coop is appreciative to samples
provided but this plays no role in the assessment of this cigar.