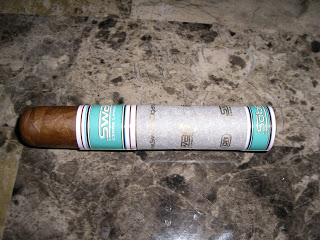 Oliveros Cigars today posted through various social media forums that a new addition to its Swag Cigars line is being launched.   This cigar is being called the Swag SoBe Edition.  The plan is for this new cigar line to be launched 2012 IPCPR.

While no specifics on the tobaccos have been released at this time, Oliveros Cigars’ President Rafael Nodal said on his Facebook page that this new blend is a Dominican puro.  This is consistent with the original Swag and the Swag Limitado ’99.  According to the Swag Cigars web-site, the Swag SoBe edition will be available in four frontmarks.  The name SoBe can be considered short for “South Beach” and the packaging and banding is consistent as it features Art Deco blue.

Earlier this year, the Swag Cigars line was added to the Boutique Blends spinoff company of Oliveros Cigars.