The CAO Concert is the second new blend since CAO was integrated into the General Cigar Company portfolio.  For this cigar, the CAO team have built a product meant to pay tribute to CAO’s roots in the music city of Nashville, Tennessee.  For those who follow the cigar industry, prior to the acquisition by General Cigar, CAO was based in Nashville.  However, in addition to the marketing paying tribute to the musical roots in Nashville, the blend itself is intended to provide harmony in its flavor profile.  The CAO Concert was formally launched at the 2012 IPCPR Trade Show.  I recently had an opportunity to sample the CAO Concert.  Not only does this cigar smoke as advertised, but in my opinion might be one of the best cigars to come out of General Cigar in the past two years.

When CAO was integrated into the General Cigar portfolio, it was announced that Team La Gloria’s Rick Rodriguez was
joining the CAO team as its blender.  If you followed Rodriguez at Team La Gloria, you are aware he was known for working on many innovative cigar concepts.  It seemed like a perfect fit for CAO.   CAO then added Ed McKenna as its Senior Brand Manager.  There is no doubt General Cigar is committed to preserving the CAO brand.  Rodriguez and McKenna seem to be the right team to carry out the tradition of CAO.

Last year, the CAO team launched their first blend, the OSA Sol.  In my opinion, while it had some unique features, it was not a cigar for everybody.  It was a quality cigar, but from an intangibles standpoint, it just seemed different than what CAO enthusiasts were used to.  These intangibles are rich, bold, and complex flavors.  The CAO Concert goes back to CAO intangibles.   The best way to describe this is that it smokes like a CAO.

General Cigar has also launched some innovative packaging and marketing around the CAO Concert.  This is described in the recent press release.

Let’s break down the CAO Concert.  The following is based on some pre-release samples from the IPCPR Trade Show.  As with all pre-release samples, we will default to a pre-review to share thoughts and perspectives.  When we sample a post release version, we will provide a formal assessment rating and score.

The CAO Concert is a true multi-national blend consisting of tobaccos from four countries.

The CAO Concert will be available in four sizes.   All four sizes will
be in the same length of 5 1/2 inches.  The vitola names pay tribute to
the musical/concert theme of this blend.

For this cigar experience, I went with the 54 ring gauge Roadie.  Of the four vitolas, this is probably the one that fits my profile the best.  An interesting thing about the CAO Concert Roadie’s appearance is the color of the wrapper.  While this is advertised as a “rosado”, the CAO Concert seems to have a much darker wrapper than most rosado wrappers I have encountered.  The color of the wrapper resembles one of milk chocolate.  The wrapper has a very oily complexion.  The wrapper seams are well-hidden, but there are tobacco veins that are visible.  The wrapper also has a toothy feel to it.   From the footer, there is a classic barnyard aroma.

The theme of music is present on the banding of this cigar.  The design of the band features a guitar pick in the center with two guitars going in opposite directions surrounding the band. The pick itself is black in color with gold font.  On the pick it says “CONCERT” in a contemporary font.  Below that it says “handcrafted by” and below that is the CAO logo.  The guitars are gray and black – also with gold lettering and gold guitar strings..  On each of the guitars it says “Perfect Harmony” in a white cursive font.  The band itself also has gold trim. 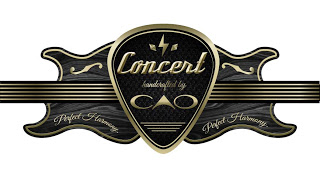 Around the ten percent mark, some cream notes joined the chocolate and leather in the forefront.  The flavor profile had definitely evolved into a complex one early one – with chocolate, leather and cream as primary notes with grass and pepper int the background.   Toward the end of the first third, the spice notes became a little more unorthodox.  It wasn’t quite an exotic spice, but something that just was different than a typical cigar pepper spice.   This spice could also be detected through the nostrils.

As the CAO Concert moved into the second third, the theme of all flavors working in harmony really shined.  The flavor pattern described above held for most of the remainder of the second third.  I also detected some hickory notes in the background once the second half of the cigar began.

The final third saw the spice notes move into the forefront and overtake the other notes.  The other flavors mentioned did not complete dissipate.  As the cigar came to a close, the spice did get a little harsher than I would have preferred.  The resulting nub was also less than ideal as it was lukewarm in temperature and softer to the touch.

The CAO Concert has some very good construction and this is reflected in the burn and draw.  The burn of the CAO Concert remained straight from start to finish – requiring minimal touch-ups with my lighter.  The resulting ash was salt and pepper and firm throughout.  The burn rate was ideal, and while the cigar was a little lukewarm at the end, the burn temperature pretty much remained ideal for the majority of the smoking experience.  The draw of the CAO Concert was outstanding – making the CAO Concert a real pleasure to smoke.

For the most part the strength and body balance each other very well.  This is another example of the “harmony” of this cigar.

The CAO Concert was simply an outstanding cigar in my book.  This cigar has all of the potential to be a standout cigar in the CAO portfolio.   It definitely ranks as one of the upper echelon cigars that was released at IPCPR.  Not only does this deliver a highly complex flavor profile, but it also delivers excellent flavors along the way.   The only “area for improvement” might be with some of the harshness I got at the very end.   This is definitely a cigar I’d recommend to an experienced cigar enthusiast – and I believe this is a cigar that will keep loyal CAO fans happy.   I can also see a novice enthusiast looking for something stronger and more full to give this a try.  This is certainly a cigar that I would smoke again and consider purchasing a box for.

Source: This cigars for this write-up were provided by General Cigar Company. Cigar Coop is appreciative for the sample, but in no
way does this influence this review.