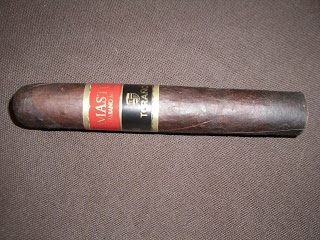 The Torano Master Maduro is the second blend in the Master Series by Torano Family Cigars.  The series is is a joint effort by Charlie Torano and his “master roller”
Julian Felipe Sosa.   The first blend in the series, the Master by Carlos Torano was released in 2010. This was a cigar that scored highly in our 2010 Cigar of the Year Countdown coming in at #17. The original Master has also been a huge commercial success for Torano Family Cigars. In a recent interview that Cigar Dave conducted with Charlie Torano (aired September 22, 2012), Torano indicated that the Master has become the #1 selling cigar by his company.   This set the stage for a sequel, and thus the Torano Master Maduro was born. Once again Torano Family Cigars strikes gold as this is another outstanding blend in the Master line.

Like the original Master cigar, Torano Family cigars pays homage to Sosa by placing his picture on the box. 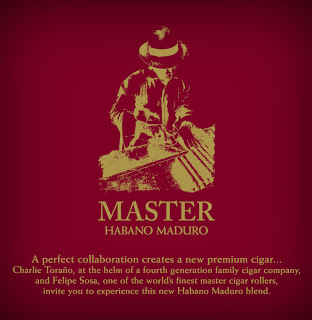 Let’s take a closer look at the Torano Master Maduro and see what this cigar brings to the table.

The Master Maduro is not the original Master by Carlos Torano.  The blend is actually different.  According to the press release for the Master Maduro:

Sosa, who is a true artisan, is passionate about the Master line which carries his image on the boxes. Sosa approached Charlie about experimenting with a Habano Maduro wrapper that would create a new cigar worthy of the Master name. After tinkering with the blend using the Habano Maduro wrapper (a dark rich wrapper grown in Nicaragua), Charlie and Sosa found this cigar to be medium in strength and full of flavor.

At this time the Torano Master Maduro is being offered in three frontmarks:

For this cigar experience, I selected the robusto vitola of the Torano Master Maduro.  The Master Maduro has a dark roasted coffee bean colored wrapper. The wrapper is almost black in color.   The wrapper itself has a slightly oily complexion.   There are a couple of visible veins, but for the most part the veins and the wrapper seams are well hidden.   From the footer of the cigar there is a slight coffee aroma that could be detected.

After lighting my Torano Master Maduro, I noticed a sharp pepper aroma that would stay with the cigar for a good chunk of the cigar experience.  I had expected to detect some espresso notes right out of the gate, but was not the case.  The Torano Master Maduro started with some oak-like wood notes and pepper.   The pepper quickly became a secondary note. Slowly, some unsweetened chocolate and coffee notes emerged.  By around the ten percent mark, a tertiary floral element emerged.

As the cigar experience of the Torano Master Maduro progressed through the first third, the chocolate became more of an espresso syrup like flavor.  Meanwhile the pepper remained a background note and the floral notes were still tertiary.

In the second third, the espresso syrup notes were complemented by notes of earth and chicory.  This provided a nice balance to the espresso notes and gave the Torano Master Maduro a nice old school flavor.  The pepper notes remained secondary and the floral notes remained tertiary.  Meanwhile the oak notes had dissipated.

In the second half, the spice to the Torano Master Maduro picks up.  At times the pepper spice seemed to have a bit of a salty component.  While there was some salt/pepper spice at the end, the spice never overwhelmed.   The spice is the primary note as the Master Maduro comes to a close.   The resulting nub was cool in temperature and firm to the touch.

The Torano Master Maduro scores nicely in terms of the attributes of burn and draw.  For the most part, the burn line remained relatively straight.  It had a tiny meander here and there, but nothing serious in terms of an uneven burn.  The resulting ash was white and color and extremely tight.  The burn rate and burn temperature were ideal.

The draw to the Torano Master Maduro was outstanding.  It had a touch of resistance – which I like on a cigar draw.  This made the Master Maduro a very nice cigar to puff on.

There is a reason why the original Master by Carlos Torano sells so well – it is one outstanding cigar.  The Torano Master Maduro provides a great complementary option to the original Master.   I have every reason to believe the Master Maduro will also be a big seller for Torano Family Cigars.  If you are looking for a maduro cigar with a lot of flavor, this is going to be the cigar for you.   While the cigar is medium to full strength, I would still encourage a novice to give this cigar a try if they are looking to graduate to something stronger.  Experienced cigar enthusiasts – especially maduro fans should also appreciate this cigar.   As for myself, this is not only a cigar I would smoke again, but one that could be a regular rotation smoke for me.

Source: The cigars used for this assessment were a combination of a pre-release cigar provided by Torano Family Cigars and cigars purchased from Outland Cigars in Charlotte, North Carolina.  The request was
initiated by Torano Family Cigars to myself (Cigar Coop) to provide feedback.   Cigar Coop is appreciative to samples provided but this plays no role in a final assessment rating and write-up.