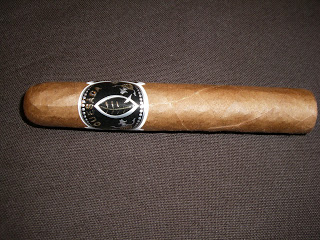 Let’s break down the Quesada Jalapa and see what this cigar brings to the table.

Blend ProfileAs mentioned the Quesada Jalapa is similar to the Quesada Seleccion Espana, but with a different wrapper.  The binder and filler are similar in each of the blends. Wrapper: Jalapa (Nicaraguan)Binder: Dominican Filler: Dominican, Connecticut Broadleaf, Nicaraguan

Vitolas AvailableThe Quesada Jalapa has a different set of frontmarks than the Quesada Seleccion Espana.  Since the Seleccion Espana was geared for Spain the vitolas were a smaller size.   This is due to the fact that there the demand in Europe is for shorter, smaller ring gauge cigars.  The frontmarks for the Quesada Jalapa reflect the demand for larger ring gauges in the United States.  The cigars are packaged ten to a box.Robusto: 4 7/8 x 50        Belicoso: 6 1/8 x 52       Prominente: 7 5/8 x 49

For this cigar experience, I selected the Robusto vitola. The Nicaraguan Jalapa wrapper is definitely a light colored wrapper.  It appears to be only a slight shade darker than an Ecuadorian Connecticut wrapper.  The wrapper has a slight amount of oil to it.  The wrapper seams are well hidden, but there are some visible veins.

I went with my usual straight cut to remove the cap of the Quesada Jalapa cigar.   Once the cap was removed, I proceeded with the pre-light draw.   The dry draw notes yielded a mix of wood, sugar cane, and a touch of pepper.  From a flavor perspective, it actually was one of the more interesting pre-light draw experiences that I have had in 2012.  At this point, I was anxious to see what the smoking experience would be, so it was time to toast the foot of the Quesada Jalapa and puff away.

The flavors of wood, sugar cane, and pepper continued once the cigar was lit.  The pepper was much more prominent once the cigar was lit.  In addition to feeling the pepper on the tongue, it could also be felt through the nostrils.  I found the Quesada Jalapa to be a cigar that produced an abundance of smoke and the peppery aroma can be detected from that.   While the pepper did subside to the background from a taste perspective, it  remained a strong presence in the nasal passages throughout the smoking experience.

As the pepper subsided on the tongue, the sugar cane notes moved into the forefront.   They were joined by some nut flavors.   The sugar cane sweetness soon morphed into more of a natural tobacco sweetness.   The pepper is very much in the background at this point.

By about the midway point, the natural tobacco sweetness diminished to a secondary note.  The wood notes that were present earlier returned and were accompanied by some toast flavors.  The wood, toast, and nut flavors were now primary.  The natural tobacco sweetness was now secondary, and the pepper (while still present via the nasal passages) was more of a tertiary flavor.

By the last third the pepper notes began to resurface. It gradually moved up to become a primary note. with the nut flavors.  The natural tobacco sweetness remained in the background, while the wood and toast had dissipated.  The end of the cigar had some spice, but no harsh notes.  The resulting nub was firm to the touch and cool in temperature.

The burn to the Quesada Jalapa was outstanding, yet a little different than most burns I have seen.  The burn line remained very sharp from start to finish – requiring minimal touch-ups with my butane lighter. The burn rate was ideal.   The burn temperature I found to be on the cooler side.   While the burn was cool, it wasn’t as if the Jalapa required any re-lights to keep it going.  What I did notice is this resulted in a very firm ash.   The ash was more difficult to remove than most.  This was the indicator to me that the burn was on the cooler side.   In the end, this had no adverse effects on the flavor profile.

In the early stages of the smoke, the draw to the Quesada Jalapa was on the tighter side.   I wondered if this was what caused the cooler burn.  However, it opened up toward the end of the first third – and the Jalapa continued to burn cool.

Final Thoughts
The original Quesada Seleccion Espana was extremely well-received by many cigar enthusiasts.  From a personal perspective I found that while the Espana was a good cigar, it was not a cigar that really fit my flavor profile.  The Quesada Jalapa is another case study in terms of what a wrapper change can do for a cigar.   In my opinion, the Jalapa wrapper created a superior flavor profile than the Quesada Seleccion Espana’s Arapiraca wrapper.   While some may disagree with my statement on the Jalapa having better flavor, one can’t argue that the flavors are the same.
As for the cooler burn, I found this more of an interesting observation than a major negative on this cigar.  This is a cigar I’d recommend to a seasoned cigar enthusiast to try.  As for novice enthusiasts, I’d encourage them to try this if they are looking for something in the medium to full range.  As for myself, this is definitely a cigar I’d reach for again.
Summary
Burn: Excellent
Draw: Good
Complexity: High
Strength: Medium to Full
Body: Medium to Full
Finish: Good
Assessment: Nice to Have
Score: 90
Source: The cigars for this assessment were purchased from Jack Schwartz Cigars in Chicago, Illinois.