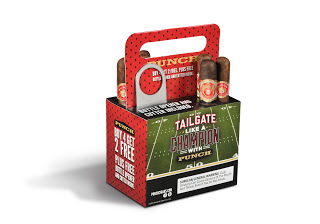 Punch Cigars® is inviting cigar lovers
to kick off football season with the brand’s first-ever tailgating pack and sweepstakes.

Debuting
this month at cigar shops
across the country, the limited edition six-pack comes with a great
starting lineup of top-sellers from one of the best brands to hail from
Honduras.  Created with the tailgating
enthusiast in mind, the pack contains a range of Punch cigars to smoke and
share. Inside each pack are three, beefy Champion frontmarks from the Punch, Double Maduro and
Rare Corojo collections, along with a Punch Grand Cru Maduro, a Punch Elite and
one Punch Deluxe Robusto. Also contained inside is a
Punch-branded cigar cutter and bottle opener, all for the suggested retail
price of $24.99 per pack.
“Tailgating fits perfectly into our occasion-based
marketing platform,” said Alan Willner, vice president of marketing for General
Cigar. “We created this promotion to connect with consumers while they’re
tailgating because hanging out with the guys and gearing up for the game is one
of the best times to sit back, light up a Punch cigar and maybe do a little
trash talking about the other team.”
To
give sports fans the chance to tailgate like a pro, Punch is also running a sweepstakes.
Between now and December 28, consumers of legal smoking age can visit www.punchcigars.com to enter to win the
Punch Tailgating grand prize: Five
boxes of Punch cigars; a Char-Broil Grill2Go Grill; a $200 Chicago Steak
Company gift card; a $500 StubHub gift card; a tailgate lounger; a tailgate
game table, and a Punch-branded lighter and ashtray.
In
addition, the Punch tailgating six-pack will be awarded to one lucky winner per
day between now and December 28. No purchase necessary. For official rules,
please visit www.punchcigars.com.
Punch cigars
are produced by General Cigar Co. Inc., which manufactures and markets
handcrafted cigars for the premium market. Committed to delivering cigars of
the finest quality, General Cigar also produces Macanudo®, Cohiba®, Partagas®
Hoyo de Monterrey®, Excalibur®, La Gloria Cubana® and several other leading
premium brands. In addition, the company grows its own premium Connecticut
Shade wrapper tobacco, as well as natural and candela wrapper in the Dominican
Republic. General Cigar also operates Club Macanudo®, a cigar bar in New York
City. Based in Richmond, VA, General Cigar sells through tobacconists
nationwide. For more information, please visit www.cigarworld.com.
®  Punch, Macanudo, Cohiba, Partagas, Hoyo de
Monterrey, Excalibur, La Gloria Cubana and Club Macanudo are registered
trademarks of General Cigar Co. Inc.
Source: The news release above was sent from General Cigar Company.  Cigar Coop prints press releases as a free service
to all cigar companies.