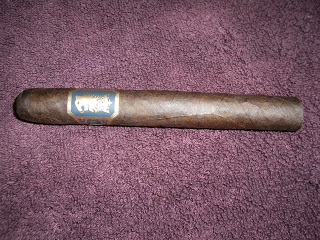 Coming in at #13 on our 2012 Cigar of the Year Countdown is the Undercrown Corona ¡Viva!. The Undercrown Corona ¡Viva! by Drew Estate is a cigar that was released in 2012.   This is one of these cigars that skirts on the border of new vitola and new blend.  Since it turns out the ¡Viva! is a modification from the original Undercrown blend, we made a decision that this cigar can qualify for the 2012 Cigar of the Year countdown.  The Undercrown ¡Viva! was originally released in a corona size vitola.  Drew Estate CEO Steve Saka hinted to us back in August that we could possibly see more ¡Viva! vitolas in 2012.

The genesis of the Undercrown line involved using alternate primings from the same tobaccos that were acquired and used in the Liga Privada blend.  The end result is we found the Undercrown Corona ¡Viva! to deliver one of the most highly complex flavor profiles seen in 2012.  We picked up ten different flavor notes during this cigar experience including: Cedar, Floral, Berry, Honey, Natural tobacco, pepper, cinnamon, raw syrup, coffee, and earth.  The flavors are definitely full-bodied and countered by some medium to full strength.  The ¡Viva! has an outstanding burn and draw to it.

Click here to read our assessment of the Undercrown Corona ¡Viva!