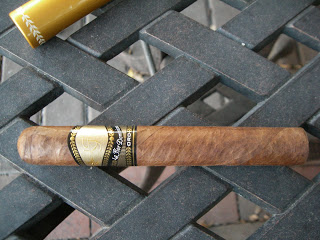 In reference to the Oro line, the press release quotes Gomez as saying “These cigars are an amped up Coronado blend, with dark Nicaraguan wrappers and Dominican fillers and binders from our farm in La Canela, Dominican Republic.”

The LFD Oro Natural comes in two sizes – a classic parejo and LFD’s trademark chisel shape.   Both vitolas are packaged in the gold tubes. Without further adieu, let’s dive into the La Flor Dominicana Oro Natural and see what this cigar brings to the table.

Blend ProfileBoth the LFD Oro Natural as well as the LFD Oro Maduro use a Nicaraguan wrapper over Dominican binder and filler.  Back when we assessed the Oro Maduro, we mentioned a report from the 7/24/12 Cigar Insider that the wrapper was similar to the LFD Coronado blend, but utilized a higher priming. The cigars will be offered with two wrapper options, a natural and a maduro. Wrapper: Nicaraguan (Natural or Maduro)Binder: DominicanFiller: DominicanVitolas Available
As mentioned above, the LFD Oro Natural comes in both a parejo and chisel-shaped vitola (the Chisel gets its nap from its chisel-shaped cap).  This differs from the LFD Oro Maduro which is only available in the parejo size.

Appearance
The tube is gold colored plastic tube with a metallic look to it.  The cap has the LFD logo in black font with the text “ORO” below it in white font.  Across the base of the tube it says “La Flor Dominicana” in black scripted font going in landscape mode.  Below that text it says “tubo natural 6” in black font.  There are also some additional leaf-like designs in white on the base of the tube.

Upon removing the cap from the tube there is a cedar lining protecting the cigar from the plastic sides.

For my cigar experience with the LFD Oro Natural, I opted to go with a straight cut into the cap of the cigar.  Once the cigar was clipped, I moved on to the pre-light draw ritual.  The dry draw notes treated me to a mix of natural tobacco and pepper.  While this particular pre-light draw didn’t knock my socks off, it still was a satisfactory one.  At this point it was time to toast the foot of my LFD Oro Natural and see what this cigar experience would bring to the table.

Overall, I found the wrapper change to bring almost a totally different cigar experience on the LFD Oro Natural when compared to the LFD Oro Maduro.

The start to LFD Oro Natural provided a mix of nut, natural tobacco, and pepper to start.  The nut flavors moved primary early, while I picked up the pepper and natural tobacco more on the retro-hale

Around the ten percent point, some caramel sweetness joined the nut flavors in the forefront, with the pepper and natural tobacco flavors still on the retro-hale.   It was around this point where the flavors began to alternate in terms of intensity in the profile.

The end of the cigar saw the focus on the natural tobacco and pepper notes.  The end of the cigar had some spice.  While it wasn’t the smoothest close to a cigar, I wouldn’t categorize it as harsh.  The resulting nub was soft to the touch and slightly lukewarm.

The burn to the LFD Oro Natural did require a little more maintenance than I preferred.  The cigar did require several touch-ups to keep the burn line straight.  While the touch-ups with my butane lighter did the trick, I did have to do more touch-ups than normal.  The resulting ash was mostly a salt and pepper color and had minimal flaking.  The burn rate for the cigar was ideal.   The burn temperature was also ideal – except for the very end by the nub where I felt it got a little warm.

The draw was outstanding from start to finish.  This made the LFD Oro Natural a very enjoyable cigar to puff on.

Like its Maduro sibling, the LFD Oro Natural is going to pack a significant punch.  I assessed this as being a full strength cigar from a nicotine standpoint.   There is definitely an edge with strength over flavor.  I don’t always view this as a negative as sometimes I feel a cigar can still deliver a good experience even if is on the stronger side.  The depth of the flavors start out medium-bodied and cross over to medium to full in the second half.   There still is enough flavor here to deliver a good experience.

The big question on is how does this cigar stack up vs. the LFD Oro Maduro?  While normally I opt for natural over maduro, in the case of the LFD Oro, I still had a preference for the Oro Maduro.  The Oro Maduro offered more in complexity and seemed to have bolder flavors.  This is not a knock on the Oro Natural – which still delivers a very solid smoking experience.  As I mentioned, there is an edge of strength over body on this cigar, so I probably would not recommend this cigar to a novice cigar enthusiast.  Experienced cigar enthusiasts and core La Flor Dominicana fans will love this cigar.  As for myself, I still would definitely smoke this cigar again.


Source: The cigars for this assessment were purchased from Outland Cigars in Charlotte, North Carolina