The Room 101 Big Delicious is the sixth release under Smoke Inn’s MicroBlend Series of cigars. The series was created to commemorate South Florida retailer Smoke Inn’s 15th anniversary.  The concept involves Smoke Inn teaming up with some of the biggest names in the cigar industry to produce a one time limited run exclusive to its shop .  This is the first cigar that Smoke Inn has collaborated with Matt Booth and his Room 101 brand for the MicroBlend series.   The Big Delicious shows the growth and maturity of the Room 101 line of cigars. It is the first retail exclusive cigar released by Room 101 Cigars as well as the ninth blend released overall by the brand.  Both Smoke Inn and Room 101 have been on fire lately – producing some outstanding blends.  The Big Delicious keeps the momentum going as this project has delivered another winner.

The Big Delicious gets its name from Smoke Inn Proprietor Abe Dababneh (who already has several other nicknames including “Honest Abe” and “Ming”).   The Room 101 Big Delicious collaboration brings together two of the most creative minds from the retail side (Dababneh) and manufacturer side (Booth).   This has even been showcased in the pre-release marketing of this cigar in a 16 part weekly fictional comic strip called “The Adventures of Swanky White (Booth) and Big Delicious”.  Marketing aside, the product stands on its own and doesn’t miss a beat with any of the pre-release hype.

Let’s take a closer look at the Room 101 Big Delicious and see what this cigar brings to the table. Since the cigars for this write-up are based on pre-release cigars, we will default to our “pre-review” to provide detailed thoughts and perspectives on the cigar.  Following the official launch of the Big Delicious on April 26, 2013, we will revisit this cigar and provide an assessment rating and score.

There is a little bit of mystery around the blend, but there has been some high level disclosure of what makes up the Room 101 Big Delicious.   It was mentioned in the press release that the Big Delicious “will be comprised of a special recipe of tobaccos based off of Room101’s last successful Limited Release.”  The cigar is produced at Tabacos Rancho Jamastran in Danli, Honduras.
Wrapper: Habano 2000Binder/Filler: Tobaccos from Brazil, Honduras, Nicaragua, and the Dominican RepublicVitolas AvailableThe cigars will be made in one size – a 6 1/4 x 42-54 box-press torpedo.  The cigars will sell for $8.95 and are packaged 15 per box.  Specific production numbers have not been released at this time.

The Room 101 Big Delicious is a well-packed box-press torpedo that is well-packed.  The Habano 2000 wrapper has a combination of coffee bean with a touch of colorado red as its color.   The wrapper itself ha a slightly oily sheen.  There are some visible veins and visible wrapper seams. The footer is not quite a shagged foot, but more like a loose “covered foot”. 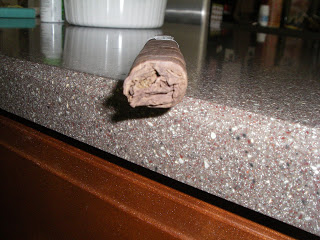 The band design has a retro-style early 1970s theme to it with a red, silver, and white color scheme.  On the front is the name “Big Delicious” in a silver colored retro-style font with red shadowing.  That text sits on top of a white background.  On the back of the band sits the text “Room 101” in silver font arranged in a landscape mode on a white background.  The marketing of the principals associated with this cigar are a part of the band design as well – namely there is a picture of the Swanky White (Booth) character on the left side of the band while the Big Delicious (Dababneh) sits on the right side.

Given the Room 101 Big Delicious is a torpedo, I defaulted to a straight cut on this cigar.  Once I clipped the torpedo tip off, I proceeded with the pre-light draw.  I found the pre-light draw to be unique – a mix of cocoa, floral, spice, and natural tobacco all fused together.  Overall, I considered the cold draw to be outstanding on this cigar.  It was now time to light up the Big Delicious.  Given the unusual shag/loose covered footer, I put a little extra toasting on this cigar to get a good burn (which seemed to work quite well).  It was now time to begin the smoking experience and see what else would be in store.

The start to the Room 101 Big Delicious provided a quick shot of pepper to start.  Once the pepper subsided, flavors of coffee, floral, and natural tobacco also entered the equation.  These notes varied in intensity from smoke to smoke during the very early phases.

By the five percent mark, the floral and pepper notes had a nice fusion that created a nice floral spice.  The coffee notes took on more of a cocoa feel to them.  The floral spice and cocoa notes took turns alternating as a primary note in the first third.  The natural tobacco flavors remained secondary.  I also detected some background cream notes – and for the most part this would play a tertiary role in the first third.

At the start of the second third of the Big Delicious, the floral spice seemed to separate back into floral and pepper notes.  Both of these flavors were the primary flavors.  The cocoa notes receded to the background joining the natural tobacco flavors. I also detected some background earth notes.  Meanwhile the cream notes were still tertiary.

Later in the second third of the Big Delicious, the cocoa notes seemed to revert back to a more classic coffee flavor.  These coffee notes emerged back as a primary note with the pepper.  The floral notes receded joining the natural tobacco and earth notes.  The cream notes seemed to take a step up – also becoming a secondary note.  This is the way the flavor profile held until the end of the cigar.  The Big Delicious was flavorful until the end with no harshness.  The resulting nub was soft to the touch, but cool in temperature.

The Big Delicious was definitely one of the better performing torpedo vitolas I have smoked this year in terms of burn and draw.  Much of this can be attributed to some very fine construction on the cigar.  The burn line remained straight for the duration of the cigar experience – not requiring many touch-ups along the way. The resulting ash was tight and only had some occasional flaking.  The ash was a classic salt and pepper color.   The burn rate and burn temperature were ideal.

The draw was excellent – not loose and not tight.  While I usually prefer the draw on a parejo, this torpedo performed so well, I didn’t even think I was smoking a torpedo.

From a strength perspective, I found the Big Delicious had some pop, but was not a nicotine bomb. The Big Delicious starts off as a medium strength cigar.  By the second half, the strength progressed to medium to full.  As for the flavors, there was some nice depth to them.  The Big Delicious starts off as a medium to full-bodied smoke in the first third.  By the second third, the flavors progressed to full-bodied and they held at this level until the end.  In terms of strength vs. body, this is a cigar where the body will have the edge, but I wouldn’t say its an overwhelming edge.

As mentioned at the start of this write-up, it seems like both Smoke Inn and Room 101 have been on a roll and the Big Delicious continues this momentum.  This is a very good collaboration between the two parties involved.  The chemistry between Booth and Dababneh seems very strong. While the Big Delicious is a one time production run, I can only guess the potential existing for further collaborations by these two principals. Overall, this cigar stands in the upper echelon of both parties work to date.  The Big Delicious delivers a nice flavor profile with some excellent complexity.  This is a cigar I can see a novice cigar graduating to something a little stronger and a little fuller.  I can also see experienced cigar enthusiasts enjoying this smoke.  As for myself, this is a box-worthy purchase and definitely a cigar I would smoke again.

Source: The cigars for this assessment were provided as a part of a purchased ticket package for the Great Smoke 2013 Pre-Event dinner.