The Alec Bradley Nica Puro is a new core line that has been released by Alec Bradley in 2013.  This has been a much anticipated release by Alec Bradley Cigars.  First up, this marks the company’s first Nicaraguan puro (all Nicaraguan tobacco) cigar to be released.  Secondly, cigar entthusiasts have been waiting quite some time for this show.  The cigar was announced eight months ago at the 2012 IPCPR Trade Show in Orlando, Florida.  While the Nica Puro was targeted for a late 2012 release, a decision was made to delay the release into 2013.  The Nica Puro has now hit retailer shelves, and this appears to be a cigar that has been well worth the wait. We recently have had an opportunity to smoke this cigar, and this is an impressive cigar that truly brings out some of the best of what Nicaraguan tobacco has to offer.

Late last year, unconfirmed reports surfaced that there would be a delay because the Alec Bradley felt the blend was at the level of the high standards that company had set.  Even at the 2012 IPCPR Trade Show, we were told samples were not being handed out to retailers because they wanted to make sure the cigars were ready.  In any case, the company should be given credit for not rushing out the product.  What was released proved to be excellent.

Without further adieu, let’s break down the Alec Bradley Nica Puro and see what this cigar brings to the table.

For this cigar experience, I went with the Toro vitola. The Nicaraguan Habano wrapper to the Alec Bradley Nica Puro has a nice milk chocolate color to it.  While there is some oil on it, the wrapper also has a coarse texture to it.  The color of the wrapper does a good job at hiding most of the wrapper seams.  There are a couple of visible veins.

While the Nica Puro appears to have a single band, it is actually two bands with one overlaying a portion of the other.  Alec Bradley is quietly putting some quality art work on to their bands and the Nica Puro is no exception.  The top (overlaying) band features the “AB” red badge in the middle. There are some gold concentric-like ovals surrounding the badge.  Just above the ovals is the text “NICA PURO” in black font with thin gold trim that is also arranged in a curved fashion.  Above that is a curved black ribbon design with the text “ALEC BRADLEY” in pale yellow.  The remainder of the band features gold medallions as well as gold, red, black, orange, pale yellow, and green design.

The second band sits under the other band.  Many of the characteristics of this secondary band pay tribute to Esteli, Nicaragua.  Much of this band features a floral mosaic.  At the bottom is the text “1685” in white font on a black background – referring to the year Esteli, Nicaragua was founded.  To the left and right of that text is the text “Esteli, Nicaragua” in white cursive font on a red background.  To the far right on that red background is the Alec Bradley slogan “Live True”.   When the top band is removed, it reveals the the full view of this secondary band – including a bright yellow stripe toward the top.  On that stripe is the text (in black font): “VILLA DE SAN ANTONIO DE PAVIA DE ESTELI…PAN AMERICAN NIC… 13 05 N  86 21 W”.  That refers to the official name of Esteli, Nicaragua as well as the geographic coordinates.

For my cigar experience, I started things off with a straight cut into my Nica Puro Toro.  Once the cap was clipped, I was ready to begin the pre-light draw.  The cold draw did provide some vintage Nicaraguan tobacco flavors consisting of earth, leather, chocolate, and some pepper.  Overall, I considered the pre-light draw of the Nica Puro to be very good.  At this point, I was ready to light up my Nica Puro and see what the actual smoking experience would deliver.

As mentioned at the start of this assessment, the Nica Puro brings out the best in what Nicaraguan tobacco has to offer. This is reflected in the flavor profile of the cigar.

The start to the Nica Puro has a combination of cocoa and white pepper.  This is soon joined by some earth notes.  The earth and pepper became primary flavors early on while the cocoa took a background role.  The retro-hale produces a nice mix of cocoa and cedar.

Around the ten percent mark, some natural tobacco flavors joined the earth and pepper in the forefront. There were also times I detected a cinnamon note in the aroma and slightly on the tongue.  This was a subtle note and did not last past the first third.

Later in the first third, a nut flavor enters the equation.  It moves into the forefront with the earth and pepper.  Meanwhile the natural tobacco joins the cocoa as a secondary note.

As the Nica Puro moved into the second third, the earth and pepper remained primary.  The nut flavors also moved in as a primary note.  There were times the background notes of cocoa and natural tobacco could be detected in the forefront,  but for the most part these two notes stayed in the background. There were a couple of points in the early parts of the second half that there was a little sourness in the background.  The sourness didn’t last too long when it surfaced.

Meanwhile the flavor profile above pretty much held until the end.  While there was some spice at the end, the spice wasn’t any heavier at the end.  The resulting nub was a true finger burner – firm to the touch and cool in temperature.

The Nica Puro scores extremely well when it comes to the attributes of burn and draw.  The burn line remained relativey straight from start to finish.  The cigar produces abundant smoke along the way.  The resulting ash is tight.  There was some minor flowering along the way, but nothing major.  The ash itself is a white color with some black speckling in it.  The burn rate and burn temperature were ideal. 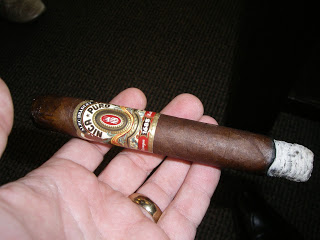 The draw to the Nica Puro was effortless.  It did not draw tight and it did not draw loose.  It made this a  nice low maintenance cigar to puff on.

Back at the 2012 IPCPR Trade Show, we were told the Nica Puro was a medium strength cigar. From my perspective, I found the strength to actually fall into the medium to full range.  I wouldn’t categorize the Nica Puro as a nicotine bomb, but it still had a little more kick than I was anticipating.  As for the depth of the flavors, the Nica Puro also falls into the medium to full-bodied range.  Both the strength and body counter each other extremely well – allowing the cigar enthusiast to get some pop as well as some nice flavors.

This cigar is truly a testament to everything good about Nicaraguan tobacco.  The flavors of earth, pepper, cocoa, natural tobacco, and nut fit my classic mold of a Nicaraguan puro.  I also liked how Alec Bradley did the packaging around this cigar  – paying tribute to the defacto capital of the Nicaraguan tobacco industry – Esteli, Nicaragua.  While this blend is more than ready to smoke, I think age will even make this a better smoke over the next few months.  Overall, this is a cigar I’d recommend to either a novice or experienced cigar enthusiast – and especially those who like Nicaraguan blends.  As for myself, this is a cigar I would smoke again.