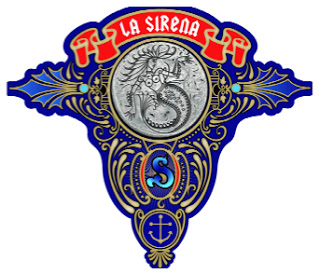 La Sirena Cigars will be adding a 7 1/4 x 56 salomon vitola as a part of its core line offering.  The cigar will make its debut at the 2013 IPCPR Trade Show in Las Vegas.   The new cigar will be called the La Sirena Dubloon.  Information on this offering was provided to Cigar Coop via a press release.

The press release provided some addition information on the background for the name.

In a recent expedition to Lake Nicaragua, which archeologists feel was once a large bay alongside the Pacific Ocean, a discovery was made. The dangerous mission to find treasures of the mermaid was met by sharks and other seemingly out of place aquatic animals. On the last day, in one of the deepest parts of the lake a cave was located with treasures of the mermaid.

Among these treasures was the Dubloon, a 7.25 x 56 Salomon. The name comes from the Spanish coins that surrounded this new rare size. The rarest of all Dubloons, was one that featured a distinctive 8 stamped into it.

Here are the particulars of the La Sirena Dubloon:

Vitolas AvailableAs mentioned the Dubloon becomes the second La Sirena to use a Habano Oscuro wrapper.

Source: Information for this article was provided in a press release sent by Miami Cigar and Company to Cigar Coop.