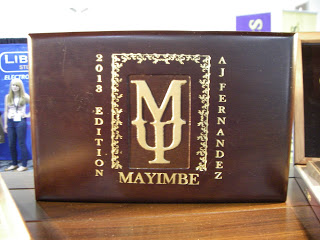 At the 2013 IPCPR Trade Show in Las Vegas, Nevada, AJ Fernandez Cigars showed off a new cigar called El Mayimbe.  This is a cigar that had been hinted about for some time.  The cigar is described as a limited edition cigar that will be available “while supplies last”.

In terms of the name El Mayimbe, A. Fernandez Cigars describes the name in some company literature as follows:

The term comes from the Taino Indians of the Quisqueya Island.  Simply translated it means ‘the Village Chief’.  In modern day Latino culture a “Mayimbe” is a person who everyone loves to be around.  Likewise you will traditionally find a “Mayimbe” around people who are happy, fun, and a have a true passion for life.

At a glance, here are the details around the El Mayimbe cigar:

The cigar is made at Tabacalera Fernandez in Estelí, Nicaragua.   An interesting component is that there is Honduran tobacco in the blend.

There will be four sizes of the El Mayimbe.  Each of the four sizes will be a 56 ring gauge.

Source: Information for this story was provided by a combination of company literature and discussions with AJ Fernandez cigars at the 2013 IPCPR Trade Show.