At the 2013 IPCPR Trade Show, boutique cigar-maker Elogio Cigars showcased their newest blend in the Excentrico line.  The Elogio Excentrico No. 2 brings an all-new blend to an all new size – and once again will be a small batch, limited release.

Elogio is a boutique cigar company run by Nabil and Rosaline Sabbah out of Wichita, Kansas. Elogio is are made in Nicaragua and are blended by Carlos Pereda Robaina.  If you recognize the Robaina name – it is the one you are probably familiar with..  Carlos is the grandson of renowned grower and blender Alejandro Robaina.  Elogio is a true vertically integrated boutique company as they are involved in the entire cigar lifecycle – from seed to store.  Given their size, their cigars are limited in availability (they produce only 50,000 total per year) and only made available to select retailers.  This is done to meet demand while delivering a high quality product.

As mentioned the blend and size for the Excentrico No. 2 differs from the 2012 Excentrico release.  From our discussions with Elogio, it appears this is part of the vision of the line – to produce a different blend in a different size. 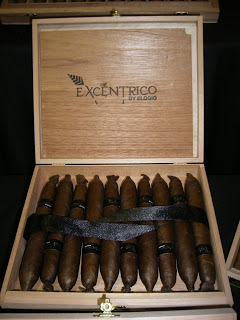 At a glance, let’s take a look at the Excentrico No. 2.  Initial information on this cigar was provided exclusively to Leaf and Grape a few weeks ago prior to the trade show.  This was one source that Elogio as their press information during the 2013 IPCPR Trade Show.