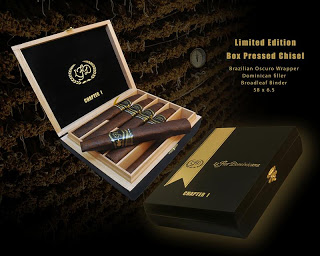 La Flor Dominicana is launching a new limited edition cigar called the La Flor Dominicana Chapter 1.  This cigar will be significant for two reasons.  First, it will introduce a box-press format to the company’s trademark chisel format.  Secondly, this was a concept that was developed by La Flor Dominica owner Litto Gomez’s son, Antonio.  The Chapter 1 will be launched at the 2013 IPCPR Trade Show in Las Vegas this month.

The chisel format is something that has been seen on such well known La Flor Dominicana Cigars such as the Oro Natural, Air Bender and Double Ligero.  The format has a wedge-shape on the capped end of the cigar that looks like the blade of the tool.   It is believed to be the first cigar shape to be trademarked.  While Litto Gomez is considered the master behind the chisel format, he was quick to give Antonio Gomez credit for this.  According to Litto Gomez, “He made it fatter, and he flattened it.”

The Chapter 1 is also going to keep to the tradition of the powerhouse La Flor Dominicana cigars.  A quote in the recent press release said, “this is the fullest bodied Chisel to date!”

“At a glance”, let’s take a closer look at the La Flor Dominicana Chapter 1:

The Chapter 1 is available in a single vitola – a 6 1/2 x 58 box-press with the chisel format.   The cigars will be packaged ten per box.  While the Chapter 1 is considered a “limited edition”, no production numbers have been disclosed.