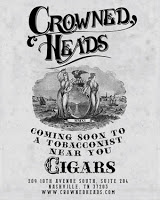 In a post on the company’s blog page, Crowned Heads co-owner Jon Huber documented a week he spent at Ernesto Perez-Carriillo’s Tabacalera La Alianza factory in the Dominican Republic.  In his trip report, Huber mentioned two projects the company has in the works.

Huber mentioned that the “finishing touches” were being put on what is being called a “2013 Limited Edition” cigar.  The cigar is being targeted for an October timeframe.  This would mark the second limited edition released by Crowned Heads.  In late 2012, the company released the limited edition Mule Kick – a cigar which scored a 91 on Cigar Coop.

Huber also mentioned that there had been progress made on a blend that is intended to be the fourth core release.  A July 2014 timeframe was mentioned indicating this would coincide with the 2014 IPCPR Trade Show.  He also mentioned “headway on a couple of 2014 projects as well”.

In November 2011, Crowned Heads released its first core blend Four Kicks.  This was followed up in 2012 with the release of Headley Grange.  This year, the company launched the J.D. Howard Reserve. All three cigars have been widely embraced by the cigar community.  Prior to the 2013 IPCPR Trade Show, we identified J.D. Howard Reserve as one of the “hottest cigars” to be released at the trade show.

No specific names or blends were mentioned for the releases that Huber hinted at.