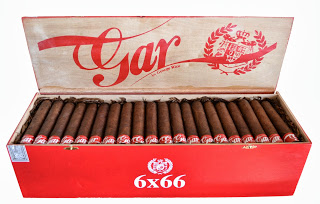 Santa Cruz Tobacco, the parent company for Gran Habano has announced a new addition to the G.A.R. by George A. Rico line.  The G.A.R. Red line is a line that will be focused around big ring gauge cigars coming in at value-price.  Information on this release was communicated via a press release to Cigar Coop.

The blend is long filler, an all-Nicaraguan puro described as a complex blend that is medium to full-bodied.  It is also described as having a “rich dark chocolate flavor with black peppery noes on the finish.”,  The cigar is sold in trays of 100.

The G.A.R. Red becomes the second new blend released under the George A. Rico line.  The company has unveiled the George Rico STK Miami American Puro at the 2013 IPCPR Trade Show.  There is already a G.A.R. White line that features an Ecuadorian Corojo wrapper and binder over Nicaraguan fillers.

As mentioned the G.A.R. Red is an all Nicaraguan puro.

As mentioned the G.A.R. Red is geared toward large ring gauges