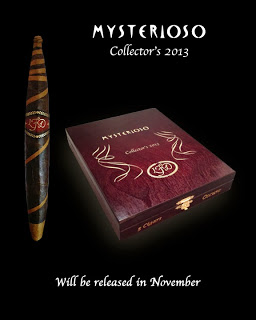 La Flor Dominicana posted a picture of a new version of the Mysterioso on their Facebook page.  Not many details were announced other than the caption “Ever wanted to smoke a work of art?” This Collector’s Edition Mysterio is a limited run cigar will be available throughout the Holiday season.” and will be known as the La Flor Dominicana Mysterioso Collector’s 2013.

This particular Mysterioso has the long perfecto shape that has been seen on the other Mysterioso releases.  The Collector’s Edition Mysterioso appears to be a variation of a barberpole.  This will have an Connecticut Broadleaf wrapper with a long Ecuadorian Connecticut Shade strip wrapped around it, but wound tighter at the top.

The La Flor Dominicana  Collector’s 2013 Mysterioso  is targeted for a November, 2013 release.

The following details were reported in a 10/10 story by Cigar Aficionado.

The La Flor Dominicana Collector’s Edition Mysterioso will be in a perfecto shape in a 7 x 55 size.  The cigar will be packaged in boxes of five and have an SRP of $19.00