Torano Family Cigars has formally announced the re-launch of its Reserva Selecta line.  Just prior to the IPCPR, word came from Torano Family Cigars President Charlie Torano that the crystal tube and cedar sheath packaging of this blend would be replaced by cellophane sleeves and traditional boxes.  As we also reported from IPCPR, a new size a 6 x 60 BFC is also be added.  These cigars are now headed to retailers. Information on the re-launch was communicated via press release to Cigar Coop.

In terms of why the change, Charlie Torano noted, “Consumers and retailers continue to heap praise on the blend, but have asked us to eliminate the tubes to save both cost and shelf space.”

The Reserva Selecta was launched back in 1999 and at 14 years old, it represents one of the oldest blends in the Torano Family Cigars portfolio.  As we reported, there will be no blend changes from the tubed version.  In addition to the 6 x 60 BFC, the robusto, toro, and torpedo versions of this cigar remain. 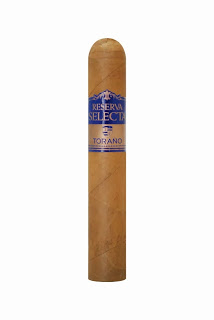 As we also reported from the trade show, there will also be a price decrease for this cigar as it will fall in the $6.95 to $8.30 price range.  According to Torano  “Offering this most popular cigar in fresh packaging and at a reduced price will introduce Reserva Selecta to an entirely new audience. Sales have remained strong and steady since 1999, and the steps we’re now taking will keep it a bedrock cigar.”

Our IPCPR Recap on the Reserva Selecta offers additional details and perspectives on this re-launch.