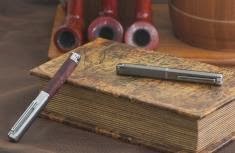 Xikar has announced new offerings in its Scribe Lighter series.  This is a pen-like lighter design that is primarily used for lighting up pipes.  The new options will include a new G2 and an updated burl finish.  This announcement was made by Xikar in a newsletter to consumers at the end of September.

The Scribe lighter uses butane and also has a flint ignition system.  From time to time, replacement of the flint will be provided.  It also features a pen clip and a fuel window to monitor the amount of butane.

As mentioned the Scribe is designed for pipe users.  By using a pull apart action, the follow of butane starts to allow the user to start the igniting process.