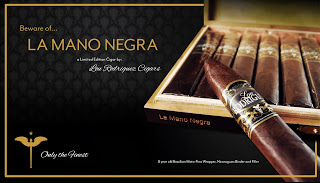 In terms of the details around the La Mano Negra, there are ties to the Lou Rodriguez MF.  As the company explained to us:

“The process for this cigar started back in 2005. Lou bought a Pilones of Brazilian tobacco. Very rare and expensive tobacco. At the time that Lou purchased this Pilones he was not involved in the cigar industry, he was using tobacco to make cigars for friends and family. As time went on and Lou launched his brand in 2010 he decided to take some tobacco from the Pilones and make the 2010 “Mata-Fina” cigar which was a huge success. Only 200 boxes were made. In July of 2013 Lou decided to go back to our factory and take some more tobacco from the same Pilones that had been aging since 2005. Which has become “La Mano-Negra” English translation “The Black Hand” This cigar was limited to just 100 boxes, and was only made available to our top 13 shops. The cigar is constructed from an 8yr old Brazilian wrapper and Nicaraguans binder and filler. This cigar comes in boxes of 10 with a certificate of authenticity…“

At a glance, here is a look at the La Mano Negra:

« News: Lou Rod Snub Nose to Debut at Lite Up Charlotte Cigar Festival in Charlotte, North Carolina » News: Tatuaje Fausto 10/50 to be Retail Exclusive to Up Down Cigar