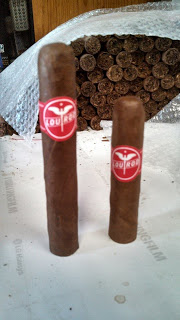 Several weeks ago, we reported a second size to the Lou Rod line by Lou Rodriguez Cigars was coming called the “Snub Nose”.  The Snub Nose added a 4 1/2 x 60 size vitola.   Cigar Coop has confirmed that this cigar will now make its debut at Lite Up Charlotte Cigar Festival on October 5th in Charlotte, North Carolina.

The Lou Rod is a new cigar by Lou Rodriguez Cigars that was launched at the 2013 IPCPR Trade Show this month in Las Vegas, Nevada.  The Lou Rod introduced a more budget friendly cigar with simpler packaging, but it also introduced the company’s first rounded 6 x 60 cigar. The 4 1/2 x 60 now becomes a second size in the line.