Note from the Editor: A new feature is being introduced on Cigar Coop that will provide assessments of some house exclusive cigars from some of the great retailers nationwide.  We’ve found some house cigars to offer high quality cigar experiences, and from time to time we will highlight these on Cigar Coop.  We kick things off with a cigar from R&R Cigars called the Black Warrior – Reagan.

The Black Warrior – Reagan is the house cigar to R&R Cigars in Tuscaloosa, Alabama.  R&R Cigars is owned by the father and son team of Randy and Reagan Starner.  Reagan, is currently making a name for himself in the cigar industry as he recently was one of the youngest ever to be elected to the IPCPR Board.  The Black Warrior pays homage to Chief Tuskaloosa paramount chief of a Mississippian chiefdom in what is now the U.S. state of Alabama.  For the Black Warrior, there will be two vitolas and each will carry the name of shop owners Randy and Reagan.  Today, we take a closer look at the Black Warrior – Reagan.  This is a torpedo-shaped vitola.  This is one of those house cigars that is definitely worth checking out as I found it to be an excellent cigar experience.

Without further ado, let’s take a closer at the Black Warrior – Reagan and see what this cigar brings to the table.

The Black Warrior is highlighted by its Sumatra Oscuro wrapper.

As mentioned above, the two vitolas are named after the father/son ownership team at R&R cigars. 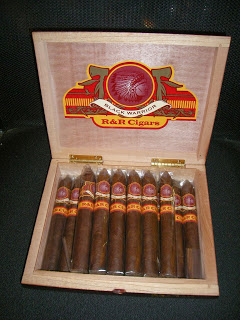 The Sumatra Oscuro wrapper has a roasted coffee bean color.  Upon closer examination of the wrapper there is some darker marbling.  The wrapper itself was somewhat oily.  There also were some visible veins and visible wrapper seams.

The band featurs a maroon, yellow, gold, black, and white color scheme.  There is a maroon Indian profile image at the top  It is surrounded by circular yellow trim.  Below the image is a white ribbon with the text “BLACK WARRIOR” in maroon font.  To the left and right of the band are gold tomahawks.  There are also gold spades going around the band.  On the left side of the band are the initials RJS. The band also has yellow trim going around it.

Given the Reagan vitola was a torpedo, I defaulted to a straight cut.  Once the tip was successfully clipped, I moved on to the pre-light draw.  The dry draw notes provided some nice flavors of coffee, natural tobacco, and some light pepper.  Overall, I found the pre-light draw experience to be very good.  At this point, I was ready to light up the Black Warrior – Reagan and see what the overall cigar experience would deliver.

The start to the Black Warrior – Reagan provided notes of roasted coffee and black pepper to start with. There was a nice underlying natural tobacco flavor that was present in the background. Overall, the notes of coffee, pepper, and natural tobacco provided some very good balance between each other.  In the early phases, there was a subtle pepper spice that was detected through the nasal passages.

As the Reagan moved through the first half, the coffee notes became the primary flavors and the pepper and natural tobacco were very close secondary notes.  I also picked up a little dark chocolate from time to time.  The pepper spice on the retro-hale got sharper during the first half of the cigar.

In the second half, the flavor profile switched up.  The natural tobacco and pepper notes moved into the forefront, while the coffee notes became secondary.  The dark chocolate notes became less frequent during the second half.  In the latter stages of the Reagan, the pepper took center stage.  The end of the Black Warrior – Reagan was spicy, but not harsh.  The resulting nub was ideal – firm to the touch and cool in temperature.

Overall, I found the Black Warrior – Reagan to be a well-constructed cigar. For a torpedo vitola, I found both the burn and draw of the Reagan to perform admirably.  The burn line remained relatively straight requiring very few touch-ups along the way.  I found the ash to be firm and a charcoal gray color.  The burn rate and burn temperature were ideal.

I was very impressed with the draw of the Black Warrior – Reagan.  As I smoked this cigar, I never felt like I was smoking a torpedo.  The nice thing is the tip of the cigar never got soft as I drew from it.  Overall this was an enjoyable cigar to smoke.

When smoking the Black Warrior – Reagan, I found it had a nice kick to it.  I assessed this cigar as being medium to full in strength.  The strength does increase somewhat throughout the smoking experience, but did fall a notch below what I would consider full strength.  As for the flavors, there was some nice depth to them.  The Black Warrior – Reagan started out medium to full-bodied and by the last third, the flavors progressed to full-bodied.  When looking at strength versus body, I gave the body a slight edge – but both attributes complemented each other nicely.

One reason why we have decided to explore some brick and mortar house cigars is because there are some very good cigars out there that fall into this category.  The Black Warrior – Reagan was most impressive.  I’m usually picky when it comes to the torpedo vitola in terms of the blend and construction.  Overall I found the Reagan’s flavor profile to work very well in the torpedo format – and the cigar performed very well in terms of its construction.  Sumatra wrapper has been big in 2013 and this one provided a very different profile than most Sumatras out there.  This is a cigar I would not hesitate to recommend to an experienced cigar enthusiast.  There might be a little more strength than a novice can handle, but it still is a good cigar to graduate that person to something on the medium to full side.  As mentioned, this is one of the better house cigars I’ve had this year. It’s one I’d smoke again and I’d recommend even splitting a box with a friend.

Source:  The cigars for this assessment was provided by R&R Cigars. The samples were received in order to provide feedback.  Cigar Coop is appreciative for the samples, but in no way does this influence this write-up.