The Bold by Nish Patel was one of several new releases by Rocky Patel Premium Cigars at the 2013 IPCPR Trade Show.  The cigar carries Rocky Patel’s brother’s name Nish on it. Over the past few years both Nish Patel and Patel’s cousin Nimish Desail have been playing an increasing role in the operations of Rocky Patel Premium Cigars.  Two years ago, both Desai and Nish Patel released their first namesake cigars – the Xen by Nish Patel and Thunder by Nimish.  Both cigars scored Honorable Mentions in our 2011 Cigar of the Year countdown.  In 2013, both Nish and Desai would again release namesake cigars.  After smoking Desai’s follow-up the Nimmy D, I was curious to see what Nish’s encore – the Bold by Nish Patel would do.  Overall, this was a solid cigar and one that delivered an excellent smoking experience.

The Bold by Nish Patel and Nimmy D are the 2013 namesake cigars by Nish and Desai respectively.  The company is branding these cigars under the umbrella “Patel Family”.  Whether the name Patel Family can be considered a line or not is unknown, but I think it is a step in the right direction in terms of brand building.  Both the  Bold and Nimmy D will have a secondary band with the name “Patel Family” on it.

Without further ado, let’s take a closer look and see what the Bold by Nish Patel brings to the table.

The Bold by Nish Patel is highlighted by its Connecticut Broadleaf wrapper and its use of a double binder.

The Bold by Nish Patel is being launched in four sizes and will be packaged 21 cigars per box:

For this cigar experience, I smoked the Toro vitola. The Connecticut Broadleaf wrapper of the Bold by Nish Patel has a roasted espresso-bean colored wrapper. Upon close examination, there are some darker spots. There is some oil on the surface of the wrapper. The dark color of the Connecticut Broadleaf wrapper does a good job at hiding the wrapper seams. There are also some visible veins.

There are two bands on the Bold by Nish Patel. The primary band features an “np” in black font with a dotted circle around it (a variation of the “RP” that is see on many Rocky Patel cigars) sitting on a white background. Below the “np” logo is th text “BOLD” in a thicker red font. To the right of the white background is a black stripe. On the black stripe is the text “by NISH PATEL” in white font. The remainder of the primary band has a red background with a textured effect.

There is a secondary band that has the text “Patel Family” in black cursive font. The background color is white that has a gradient effect that goes to light pink to a red coloring. There is also black trim on the secondary band.

For my smoking experience of the Bold by Nish Patel Toro, I went with my usual selection of a straight cut. After clipping the cap, I moved on to the pre-light draw phase. The dry draw notes provided a mix of espresso, cedar spice, and a little black cherry sweetness. I did wonder a bit if the dark wrapper played into the power of suggestion with the espresso notes I detected, but I do feel confident that espresso was one of the flavors I detected from this cigar. Overall I considered the pre-light draw to be satisfactory. At this point I was ready to light up the Bold by Nish Patel and see what else was in store.

The Bold by Nish Patel started with a nice shot of pepper to kick things off. This was followed up by some espresso flavors which would move into the forefront. The pepper subsided into the background and took on more of a white pepper taste. The pepper could also be detected in the background.

In the last third, the white pepper notes ramped up. The dark chocolate and pepper moved into the background. The spice definitely was center stage during these latter stages. In the final part of the cigar, I found the spice to be slightly harsh. The resulting nub was cool in temperature and firm to the touch.

For the most part, the burn scored very well. The burn line remained on the straight side. There were a couple of times the burn was a little uneven, but nothing major. The touch-ups seemed to do the trick keeping the cigar burning straight. The resulting ash was firm with a classic salt and pepper color. The burn rate and burn temperature were ideal. 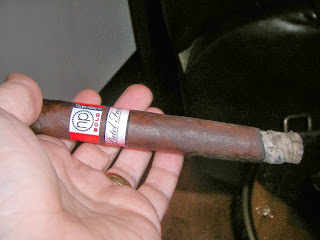 The draw to the Bold by Nish Patel was very good as well. It was not too loose and not too tight. This made the Bold a low maintenance cigar to puff on.

I had heard some mixed reports on how “bold” the Bold by Nish Patel was. From my perspective, I found the Bold to have just enough kick to qualify it to be a medium to full strength cigar. Whether that is considered “bold” in many people’s minds is probably a subjective one. From a depth of flavor perspective, I think the boldness is more clearly defined. I assessed the Bold to have enough depth to be full-bodied. Overall, I think the body had an edge over the strength, so if I had to say why this cigar is bold – it is more due to the depth of the flavors.

Overall I found the Bold by Nish Patel to be a nice addition to Rocky Patel’s portfolio. This cigar is going to be a completely different experience than what Nish Patel delivered with the Xen in 2011. I felt the flavors were very good and the cigar had some nice complexity. I won’t say the Bold is the boldest cigar I’ve had, but I felt it had enough boldness to satisfy. While this cigar is medium to full in strength and full in body, I’d still recommend this to a novice enthusiast because it is a nice cigar to possibly move that person to something fuller. Experienced cigar enthusiasts who like espresso, chocolate, and pepper flavors should be satisfied with this cigar. As for myself, this was a nice cigar. It’s one I would smoke again and easily recommend a five pack for.

Source: The cigars for this assessment were purchased from Burners Cigars in Huntersville, North Carolina.