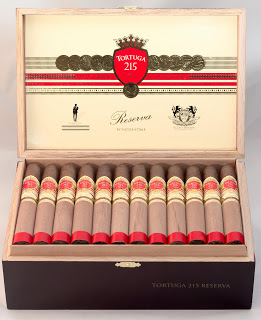 The Tortuga 215 Reserva, a new line introduced by Victor Vitale’s Legacy Brands at the 2013 IPCPR will be introducing three new vitolas over the next few months.  These line extensions will bring the total vitolas in the Tortuga 215 Reserva line to seven.  The first vitola will be called the Cedro No. 5, adds a 5 1/2 x 48 cigar to the line.  The No. 5 is scheduled to be shipped to Legacy Brands Appointed Merchants before the end of 2013.

While the blend is the same Nicaraguan puro seen in the 215 Reserva line, Vitale told Cigar Coop that the new Cedro sizes will differ from the original vitolas in three ways:  First they will be rounded vitolas as opposed to box-press like the four original vitolas;  Second, the Cedro vitolas will all come cedar wrapper; And third the cigars will be geared toward smaller ring gauges.

According to Vitale, the other two sizes in the Cedro line (as well as their names) are still to be determined.

The Cedro No. 5 originally started as a personal size cigar for Vitale – who enjoys smaller ring gauges.  He was surprised at the response he got from his Appointed Merchants who went ahead and placed orders for the cigar.

At a glance, here is a look at the Tortuga 215 line:
Blend Profile
Wrapper: NicaraguanBinder: NicaraguanFiller: Nicaraguan
Vitolas Available
As mentioned the Cedro vitolas are rounded – which differ from the original box-press sizes.  The remaining two vitolas have not been named.