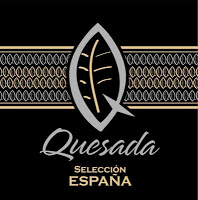 Quesada Cigars will be adding a new frontmark to its Seleccion Espana in 2014.  The Quesada Seleccion Espana Ninfa will be a 7 x 33 limited release line extension that will be heading to twelve select accounts.

Production of the Quesada Seleccion Espana Ninfa will be limited to twelve fifty count boxes.  Each month one retailer will receive one of the fifty count boxes.  In 2013, Quesada employed a similar strategy when it released the Quesada Seleccion Espana, but unlike distribution of the lanceros, retailers for the Ninfa will not be chosen at random.  In a press statement by Terence Reilly of S.A.G. Imports, he explained the process for the distribution of the Ninfa:

“There will be 12 fifty-count boxes of Quesada Ninfas made for sale.  The cigars will be banded.  One box will be shipped every month.  These cigars cannot be ordered or requested just like the Lanceros.  Unlike the 2013 lanceros, these boxes will not be chosen at random.  One retailer will be selected each month.  The change is due to two reasons: one, several very deserving accounts did not receive any and we aim to rectify that; and two, no one believed it was a raffle and so if we are going to take flack from people not receiving a box, it might as well be deserved.”

The price point will be $12.95 for the Ninfa.  This actually costs more than the lancero.  Reilly explained the reason for this,  “Because it was the most difficult cigar we’ve ever made.  With a 7×33 there is very little room for error, and, to further complicate matters, the Espana has four filler tobaccos.  To adjust the blend so as to maintain consistent flavor and avoid draw problems took months of efforts.  None of our main rollers could handle the project.  It looked like we were going to have to cancel the Ninfa until we asked our production supervisor, a man who has 20 years experience rolling all sorts of strange shapes and sizes, to see what he could do.  He was quite positive he wasn’t going to be able to make one with the Espana blend but after much pleading and the promise of a bottle of scotch, he set out to see what he could do.  After two prototypes, one which didn’t draw consistently and one that lost the distinct Espana flavor, he finally nailed it. “

At a glance, here is a closer look at the  Quesada Seleccion Espana line: