The Ditka 89 is the fifth cigar in Camacho Cigars’ Mike Ditka line of cigar.  Over the past year, Camacho has launched the Ditka line of cigars to pay homage to NFL Hall of Famer Mike Ditka.  The “89” represented Ditka’s number when he played Tight End for the Chicago Bears.  The recent release of the Ditka 89 cigars was meant to coincide with the December 9th, 2013 retirement of Ditka’s number by the Chicago Bears.  Recently I have had an opportunity to smoke the Ditka 89.  Overall I found this to be a very good cigar – and one that fits nicely into Camacho’s new “Bold Standard” campaign.

The Ditka 89 joins the other four blends in the line: The Player, The Coach, The Hall of Famer, and the Throwback.  Each of these blends have been limited production.  The Ditka 89 is no exception.as 2,000 boxes of 20 are being produced for a total for 40,000 cigars.

Without further ado, let’s take a closer look at the Ditka 89 and see what this cigar brings to the table:

Blend Profile
The blend of the Ditka 89 is a multi-national blend.  This becomes the second blend in the Ditka line to use a San Andres wrapper (joining the Ditka Hall of Famer)
Wrapper: San Andres Maduro (Mexico)Binder: NicaraguanFiller: Dominican Republic and Honduran

Vitolas Available
The Ditka 89 is available in one size – a 6 x 50 toro.  As mentioned the Ditka 89 is packaged 20 cigars per box.

The Ditka 89’s San Andres wrapper has a dark caramel color.  The wrapper itself has an oily complexion on the surface.  There are some visible veins, but the wrapper seams are well hidden.  The surface of the wrapper is slightly bumpy.

The band to the Ditka 89 is adorned with the Chicago Bears colors of blue and orange  The upper portion of the band is blue.  On the band is a large orange “89” with the text “DITKA” above it in a smaller orange fount.  There are orange stripes above and below the “DITKA 89” text.  Below the blue field is a white stripe with silver trim.  On the white stripe is the text “A SPECIALLY HANDCRAFTED LIMITED EDITION” in blue font.  The lower portion of the band is orange with silver trim.  On that orange background is the new “CAMACHO” logo in silver font.

While each of the previous Ditka releases were packaged in coffin boxes, the Ditka 89 is not.  Each of the cigars are individually packaged in traditional boxes. 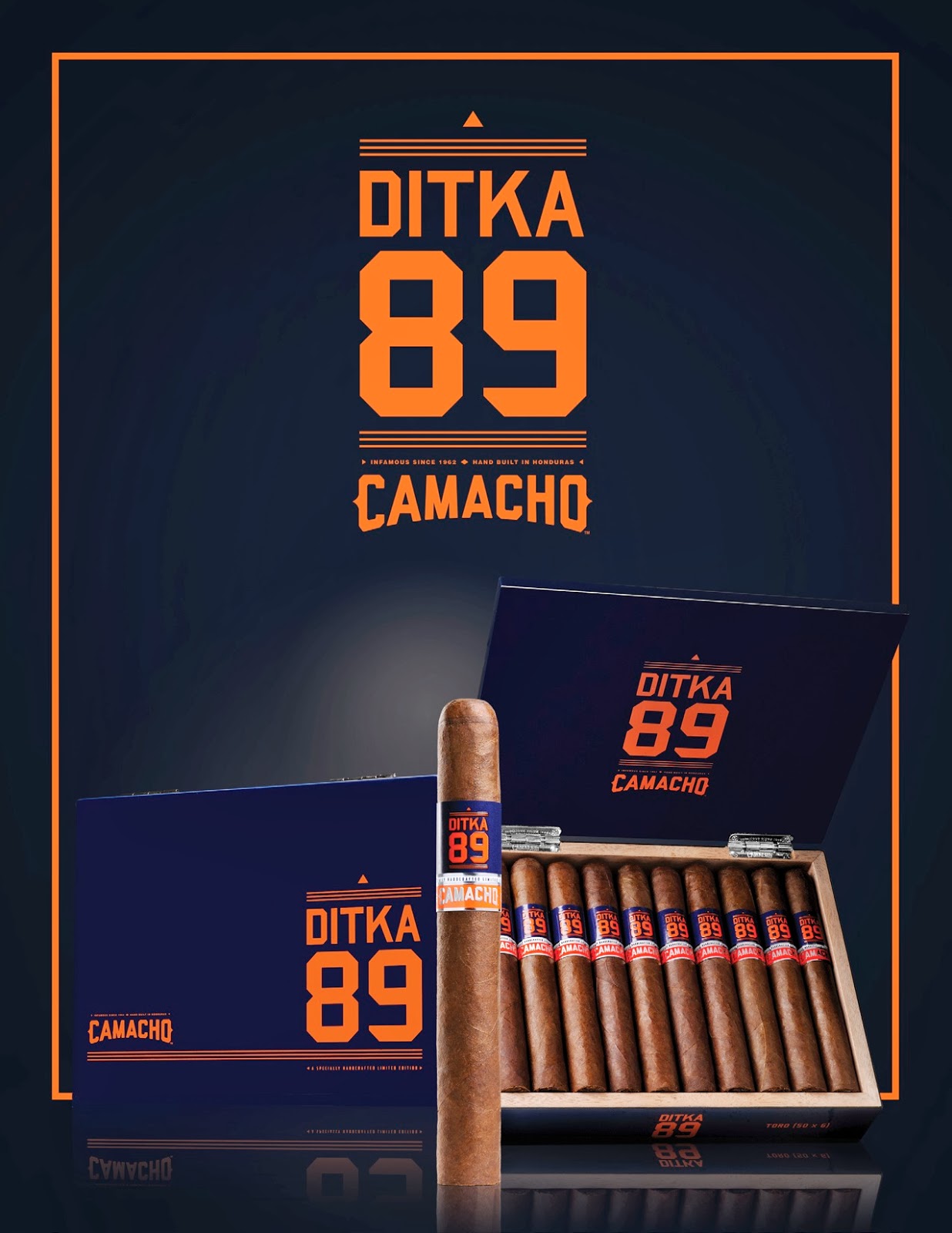 Prior to lighting up the Ditka 89, I went with my usual choice of a straight cut to remove the cap.  Once the cap was clipped I moved on to the pre-light draw.  The dry draw notes of the Ditka 89 provided a nice mix of chocolate, earth, natural tobacco as well as a slight touch of pepper on the tongue.  Overall, I found the pre-light draw to the Ditka 89 to be satisfactory.  At this point I was ready to light up this cigar and see what the overall smoking experience would deliver.

The start to Ditka 89 provided a short blast of red pepper and earth.  I detected a variety of flavor nuances as the flavor profile took shape.  The red pepper and earth were joined by notes of chocolate and natural tobacco.  In the early stages, I did not find a dominant flavor.  Meanwhile there was a creamy undertone that I detected in the background.  As for the retro-hale, I could also detect the red pepper spice.

As the Ditka 89 progressed through the first third, there was still no dominant flavor.  However I found each of the notes meshed very well with each other.  The chocolate and earth notes seemed to balance nicely against the natural tobacco and red pepper.  At the same time the cream was still in the background – smoothing the flavors to some extent.

In the second third, the earth notes took center stage as a primary flavor.  The red pepper was now a close secondary note.  Meanwhile the chocolate, natural tobacco, and cream notes were further in the background.

By the last third, the flavor profile became more earthy and peppery with the chocolate notes a distant secondary note.  The cream notes and natural tobacco flavors had now dissipated.  The cigar was a little rough at the end, but not overly harsh.  The resulting nub was soft to the touch and cool in temperature.

As for the draw, I found it to be excellent.  The best way to assess this draw is that it was not too tight and not too loose.  This made the Ditka 89 a low maintenance cigar to puff on from start to finish.

The Ditka 89 provided a very enjoyable cigar experience.  Many have read my thoughts on San Andres wrapper cigars and how I feel that wrapper can overpower a blend.  In the case of the Ditka 89, no such problem.  I was also surprised at the amount of complexity in the flavor profile produced by this cigar.  As mentioned at the start of this assessment, I mentioned that this fits into the Camacho brand’s “Bold Standard” nicely.  No doubt this cigar will have both strength and body, therefore this is a cigar I’m going to steer more toward the experienced cigar enthusiast.   This cigar does carry a price point of $12.50.  While the Ditka Throwback was available at a lower price point in an individual coffin, I do feel the Ditka 89 will deliver a better cigar experience.  This is a definitely a cigar I’d smoke again – and even invest in a five pack of.