The Quesada 40th Anniversary Corona Clasica is one of six sizes being offered in the 40th Anniversary line.  The other five vitolas are made up of a San Andres wrapper from Mexico with a Dominican binder and a mix of Dominican and Nicaraguan fillers.  Three of those five are regular production offerings (Robusto, Toro, Toro Real).  The other two are limited production offerings. One is a Box-Press Toro and the other is a unique Box-Pressed Salomon that is rounded at the ends, but pressed in the center.  These five vitolas were created by Manolo’s daughters Patricia and Raquel.

At press time, the details of Quesada 40th Anniversary Corona Clasica have not been disclosed other that it is a different blend from the remainder of the line.

For completeness, we include the details of the other offerings in the Quesada 40th Anniversary line:

The Quesada 40th Anniversary Corona Clasica has a lighter colored wrapper than the rest of the Quesada 40th Anniversary line. I would describe this cigar as being a shade or two darker than a Connecticut Shade wrapper. There is a moderate amount of oil on the surface of this wrapper.  For the most part there isn’t much in the way of visible wrapper seams and the veins are on the thin side.

There are two bands on the Quesada 40th Anniversary Corona Clasica. The first is the silver, black band that is seen on many Quesada cigars.  It features the large silver and gold Quesada “Q”-shaped leaf logo. Below the leaf is the text “Quesada” in silver cursive font. To the left and right of this text is a gold stripe. On the left stripe is the text “DOMINICAN REPUBLIC” in small black font.  On the right stripe is the text “MADE BY HAND” in small black font. Finally, surrounding the leaf logo to the left and right are silver and gold rows of miniature “Q”-shaped leaf logos.

There is a second band that is also black, silver, and gold.  On the black background is the text “40th” in large gold font. Just below that text is the text “ANNIVERSARY” in small silver font. The rest of the band has gold and silver adornments including rows of miniature “Q”-shaped leaf leaf logos going around the band.

The Quesada 40th Anniversary Corona Clasica featured a paper sheath from the footer of the band up until the lower part of the secondary band.

As I normally do, I went with a straight cut to remove the cap of the Quesada 40th Anniversary Corona Clasica.  Once the cap was clipped, I moved on to the pre-light draw.  The cold draw provided a nice dose of sweet tobacco.  There was almost a little bit of a raw sugar taste to the sweetness.  There also was a nice tingly spice on the tongue.  Overall, I was quite pleased with the pre-light draw of the Corona Clasica.  At this point I removed the paper sheath, lit up the cigar and awaited what the smoking phase would deliver.

The start to the Quesada 40th Anniversary Corona Clasica continued with some of the sweet natural tobacco notes that I got from the pre-light draw.  There also was some black pepper present in the forefront. I also picked up a slight grassy note in the background.  Meanwhile the black pepper along with a touch of sweetness was present on the retro-hale.

In the early stages, the natural tobacco sweetness moved to the forefront.  There was a little bit of raw sugar and a slight bit of cherry mixed in with this sweetness.  At the same time, the sweetness did not overpower the pallet.  The pepper now was a secondary note and the grass was more distant.  Both these notes helped balance the sweetness nicely.

In the second third, the pepper increased and moved back into the forefront.  Both the pepper and natural tobacco sweetness alternated back and forth as to what was a primary flavor.  Meanwhile the grass notes were still subtle in the background.

Toward the end of the second third, the grassy notes increased somewhat, but did not make it into the forefront.   The pepper also took more hold as a primary note, but there was still some nice sweetness present.  This is the way the flavor profile held until the end.  The resulting nub was slightly soft to the touch and cool in temperature.

The burn to the Quesada 40th Anniversary Corona Clasica scored very nicely.  The burn line remained straight for the most part.  There were a couple of isolated cases where the line got slightly jagged, but this proved not to be a problem.  The resulting ash was tight and firm with a mostly white color.  The burn rate and burn temperature were ideal. 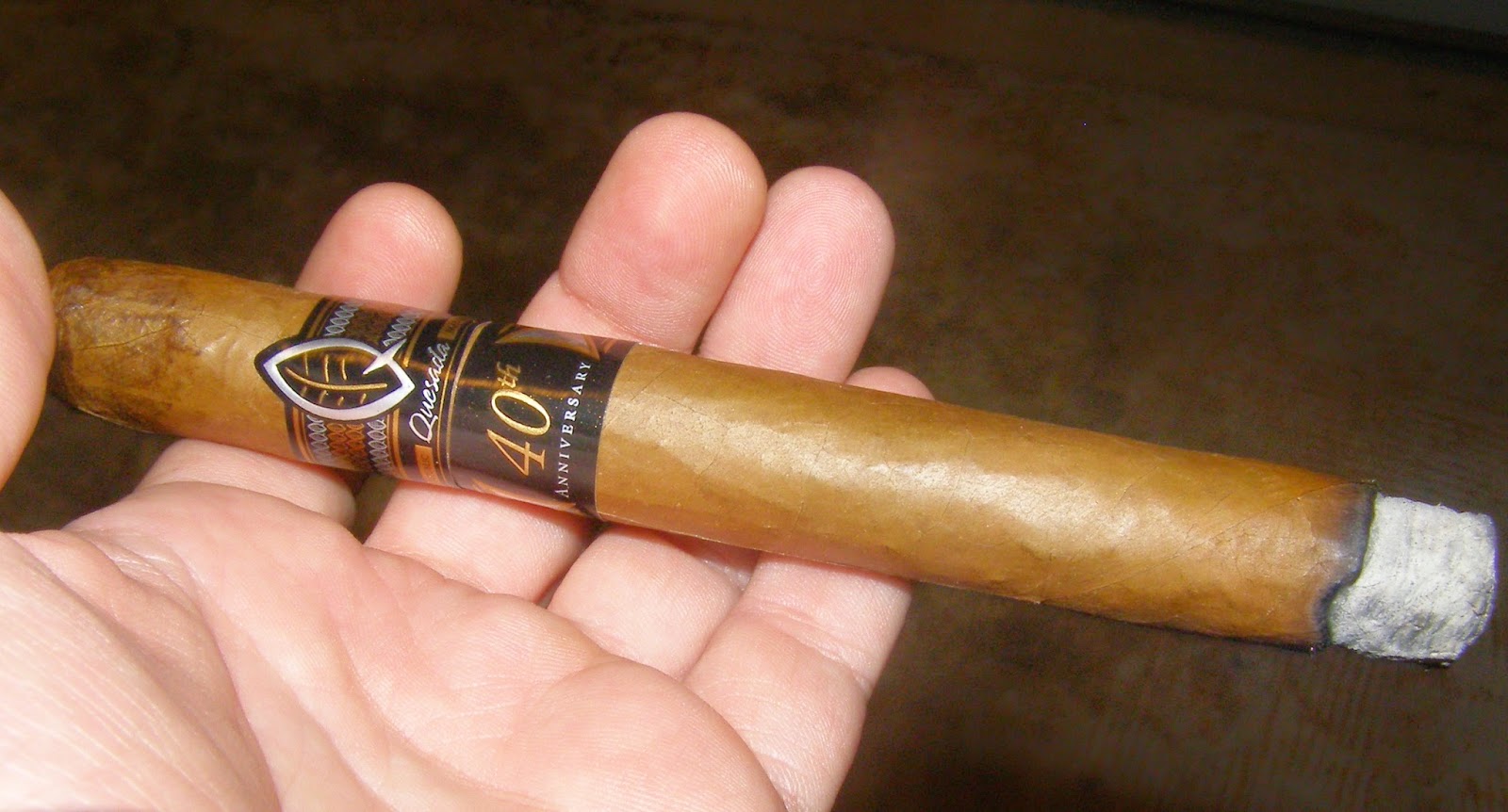 The draw was excellent as well.  It had a touch of resistance to it – which is something I enjoy on my draw.  This made the Quesada 40th Anniversary Corona Clasica a pleasure to smoke.

The lighter shade of brown on this wrapper might be deceiving when it comes to the strength on this cigar.  The Quesada 40th Anniversary Corona Clasica starts out medium in strength.  By the last third, it progresses to medium to full strength.  This cigar isn’t going to be a nicotine bomb, but it will provide just the right kick.

Manuel Quesada and the Quesada family have blended some all-time great cigars. After smoking the Quesada 40th Anniversary Corona Clasica, I believe they have taken things to another level. This is not only one of their all-time classics, but one of the best cigars released in 2014. If this cigar can maintain its consistency and profile over time, this may be talked about as an all-time historic cigar. This is a cigar probably more geared for a seasoned cigar enthusiast, but its such a special cigar I’d still give it to a novice enthusiast who wants to smoke something special.

We define an Oasis level cigar as a cigar that one “Pursues relentlessly. Crawl Across a desert of broken glass to find and build a new humidor to store all the boxes”.  The Quesada 40th Anniversary Corona Clasica earns the first Oasis rating from myself for a 2014 release.