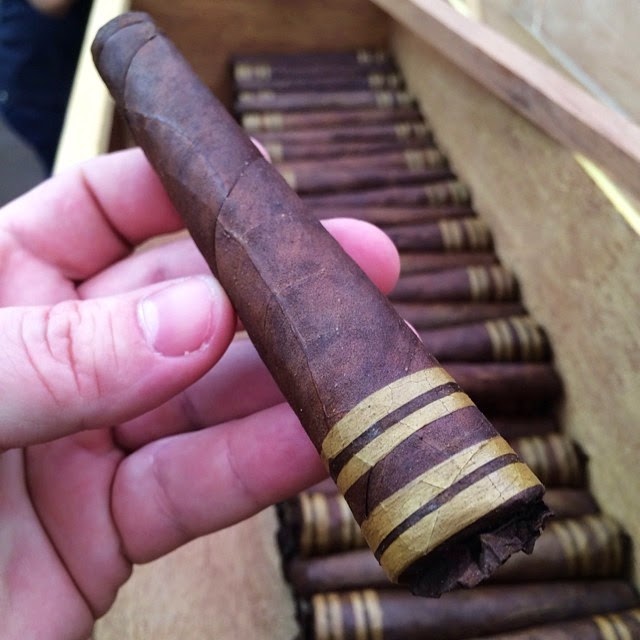 RoMa Craft Tobac co-founder Skip Martin has posted some photos on social media of a special version of the CRAFT 2013 La Campana de Panama Soberana.  Martin described this as an “Inside Out” version of the original CRAFT 2013 with a U.S. Connecticut Broadleaf Maduro wrapper and Ecuador Habano Ligero Binder.  According to a post on Martin’s Facebook page, the cigar is targeted for the California Mega Herf in Los Angeles on September 26 -28.  The project appears to be have been dubbed “Witchcraft”

The name La Campana de Panama Soberana comes from the church bells in the neighborhood of Panama Soberana in Esteli Nicaragua – the city where RoMa Craft Tobac co-owner Skip Martin also is an owner with the Nica Sueno factory.  Looking at the cigar, it sort of resembles a bell or a trumpet with its unorthodox shape.  The name CRAFT is also appropriate here as the La Campana de Panama does not use any cigar molds during the construction process.  It also features some strips of tobacco on the footer almost creating a saturn-like ring effect.  The blend to the CRAFT 2013  uses tobaccos with origins found on the CroMagnon, Aquitaine, and Intemperance line.

In terms of the Witchcraft project, Martin explained on his his social media pages: “No, your eyes are not deceiving you. We had 80 extra CRAFT 2013 boxes so I decided to make 800 of inside out version of the La Campana de Panama Soberana with a US Connecticut Broadleaf Ligero Maduro wrapper and an Ecuador Habano Ligero binder. Órale! Thiis seems like it is exactly the little something special I needed to bring to the Mega Herf in September.”