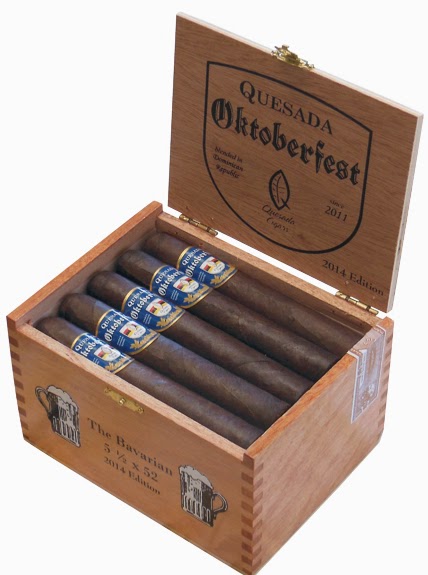 The Oktoberfest by Quesada Cigars is making a return for 2014.  While the blend will remain the same, but as usual will feature a different vintage crop.  The big change will be that the cigars will feature a new band.  The company is also adding a Salomon Press vitola that will be made available at events only.   The cigars are expected to be showcased at the 2014 IPCPR Trade Show.

This marks the fourth consecutive year of the Oktoberfest line. This is annual limited production run. The concept was to he idea bring a cigar to the table. that can be paired with malt liquor (aka beer). The releases have ubeen timed in the weeks prior to the Oktoberfest festival celebrations.

The bands will have more of a classic German look, in terms of both font and design.  At the center of the band is a shield that contains the original Quesada Oktoberfest logo.  The artwork on the boxes has been slightly altered to reflect the new look.

In a press release, Terence Reilly of Quesada Cigars talks of Quesada’s approach to this years annual event: “This is our fourth year producing Okotberfest and although the blend is the same every year, the wrapper is selected from a different crop year, thereby giving each seasonal edition its own unique flavor. However, because there was no way for the consumer to differentiate between years, we decided to re-design the packaging and bands so that moving forward each annual release will be distinctive. Aficionados will now know which release they are purchasing or have stashed in their humidors.”

At a glance, here is a look at the Quesada Oktoberfest 2014 line:

There was a limited release Oktoberfest Dunkel done for Smoke Inn as a part of their MicroBlend series.  The Dunkel featured a Connecticut Broadleaf wrapper.