As we mentioned in the Pressed Perfecto assessment, the year 2014 has proven to be a very busy year for Kapacee and his company.  In addition to introducing the two Exclusivo U.S.A. lines, the company has expanded the Regius Cigars Seleccion Orchant line and has also collaborated with That Cigar Place in Houston, Texas to release a maduro called the Regius Damaris.

There are four sizes being launched in the Regius Claro Especial Exclusivo U.S.A line.  These cigars will be officially be launched on September 25th at Casa de Montecristo just outside of Chicago, Illinois.  This is the same place where the red label Regius Exclusivo U.S.A was launched.

Without further ado, lets take a closer look at the Regius Claro Especial Exclusivo U.S.A in the Fat Perfecto and see what this cigar brings to the table.

As we initially reported, the Regius Claro Especial Exclusivo U.S.A  is a Nicaraguan puro with a twist.  This twist with this cigar was to put less emphasis on the wrapper and more emphasis on the binder and filler. To compensate for this, Kapacee opted to place a double binder on this cigar.

There are also plans to add a Toro and Robusto to the line down the road.

The Regius Claro Especial Exclusivo U.S.A. Fat Perfecto features a cinnamon-colored wrapper.  For whatever reason, I found this version of the Fat Perfecto to have more oil on the surface than when I assessed the Pressed Perfecto..  There are some visible veins, but the wrapper seams were quite well hidden.  The cigar has an open footer.  Toward the cap, the perfecto has a sharper taper.  The cap itself is finished with a spiral pig-tail. 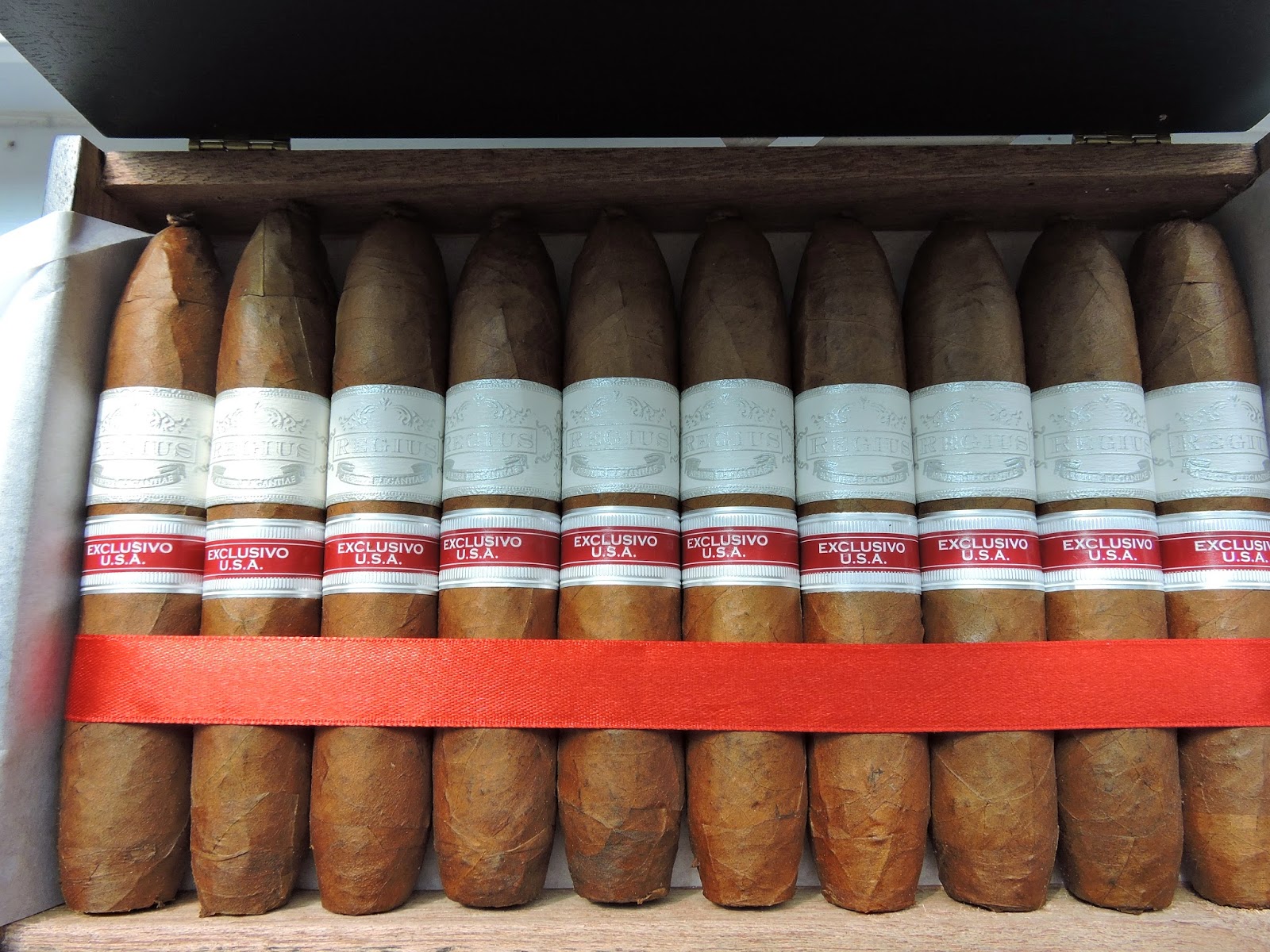 As opposed to pulling the spiral pig-tail off the Fat Perfecto, I opted to place a straight cut to remove the cap.  Once the cap was clipped.  Similar to the Pressed Perfecto, I found the Fat Perfecto provided notes of wood and fruit on the dry draw.  There wasn’t much in the way of spice on this dry draw.  Overall while the pre-light was simple, I still found it very satisfactory. At this point I was ready to light up the Fat Perfecto and see what the smoking phase would deliver.

The start to the Regius Claro Especial Exclusivo U.S.A. Fat Perfecto delivered some notes of wood, light pepper, and a subtle fruit note.  It didn’t take long before notes of cream surfaced and moved into the forefront.  Meanwhile, the pepper and wood notes moved into the background.  On the retro-hale, there was some pepper spice, but there also was a sweet component that I detected.  This sweetness was something I did not get on the Pressed Perfecto.

By the end of the first third, the fruit sweetness had joined the cream in the forefront.  The fruit and cream notes alternated in intensity as to which was primary.  As the Fat Perfecto moved into the second third, the pepper notes started to increase.  Meanwhile the wood notes remained in the background.

The pepper increased into the final third – and it the latter stages it made it into the forefront joining the fruit sweetness.  The cream notes were secondary.  This is the way the flavor profile came to a close – the resulting nub was cool in temperature and soft to the touch.

For a cigar with a larger ring gauge and in a perfecto shape, the burn scored quite nicely on the Fat Perfecto.  While there was a slight jaggedness on the burn line, the burn on the cigar as a whole remained straight and was not prone to tunneling or canoeing.  The resulting ash had a salt and pepper color.  The ash itself was firm from start to finish and came off the cigar in nice clean chunks.  The burn rate and burn temperature were both ideal.

One thing I am finding out when it comes to Regius Cigars is while each of the sizes in their blends have common ground, there are also enough nuances to differentiate one size from another.  So far I’ve gone through the Fat Perfecto and the Pressed Perfecto in the Regius Claro Especial Exclusivo U.S.A . I also found both cigars to exhibit a sweetness and smoothness throughout the cigar.   I also found both cigars to deliver plenty of favor.  Like the Pressed Pressed Perfecto, the double binder worked very well here. The big difference is I though the Fat Perfecto was slightly dialed back in terms of strength and body.

As I also commented with the Pressed Perfecto, the Fat Perfecto is a cigar that requires no aging – it is ready to smoke now.  At the same time, i do feel both cigars have some serious aging potential.