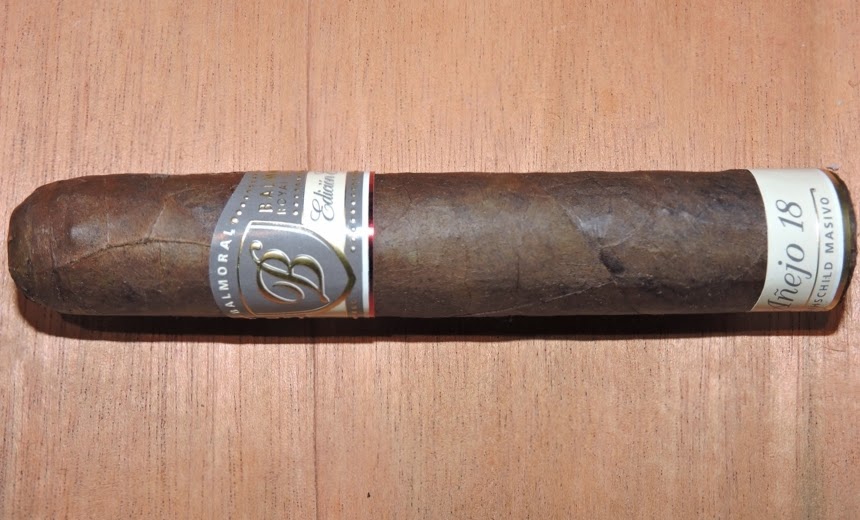 The Balmoral Royal Selection Anejo 18 is a line of cigars made by Royal Agio Cigars.  Royal Agio Cigars is a company based in Duizel Netherlands.  The company made some news this year when it moved its U.S. distribution to be handled by Drew Estate. Royal Agio Cigars consists of three brands Mehari’s, Panter, and Balmoral. While Mehari’s and Panter are focused on cigarillo and small cigar offerings, the Balmoral line is one that is focused on long filler, premium cigar offerings. Today we take a look at one of those offerings – the Balmoral Royal Selection Anejo 18. This is a cigar that had been previously offered in Europe, and now is being made available to the U.S. market as a result of the Drew Estate agreement  While I wouldn’t categorize this cigar as revolutionary, it does deliver a nice overall experience.

As a brand Balmoral traces its roots back to 1895.  The name is derived from the Scottish castle that is used by the Royal Family in the United Kingdom today. Balmoral’s Royal Selection line a line made by an experienced brand of rollers.  The cigars are made at the Dominican Republc. Drew Estate is not known for cigars made in the Dominican and while Royal Agio is a separate company, it still gives Drew Estate something different to their overall portfolio they distribute. The name Anejo 18 refers to the wrapper – something that Royal Agio claims to be an 18 years old Brazilian Maduro.

As mentioned the Brazilian Maduro wrapper is one that supponsingly is 18 years old.  The blend is a three country multinational blend.

The Balmoral Royal Selection Anejo 18 is available in two sizes:

For this cigar experience, I smoked the Rothschild Masivo – which for a cigar geared for the European market can be considered a large ring gauge.  The Brazilian Maduro wrapper has a rich coffee bean color.  Upon closer examination, some darker marbling can be seen.  The wrapper did not have much in the way of oil on the surface.  There are some visible veins and some thin visible wrapper seams.

There are two bands on the  Balmoral Royal Selection Anejo.  The primary band consists of a gray, ivory, white, and red color scheme.  On the center of the band is a gray shield with gold and white trim.  On the center of that shield is large gold cursive-styled “B”.  The upper portion of the band surrounding the shield is gray.  Above the shield on that gray background is the text “BALMORAL” in white font. To the left and right of the shield on the gray background is the text “BALMORAL ROYAL SELECTION” in gold font.  The far left and right sides of the band come together (on the back of the cigar) to make a smaller version of the gray shield that is on the front of the band – including the gold “B”.  The remainder of the band has gold dots across the top and bottom.  There is metallic red trim at the bottom of the band.

The secondary band is ivory in color.  The text “Anejo 18” is in gray font on that background. Below that text is the text “ROTHSCHILD MASIVO” in smaller gray font.  There is a gold separator between both lines of text.

Prior to lighting up my Balmoral Royal Selection Anejo 18 Rothschild Masivo, I went with a straight cut to remove the cap.  Once the cap was removed, I moved on to the pre-light draw.  The dry draw provided notes of leather and cocoa.  There was not much in the way of spice.  Overall it wasn’t a bad pre-light draw, but this did not have me doing handstands either.  At this point, I removed the footer band off the Anejo 18 and prepared for what the overall cigar experience would have in store.

The start to the Balmoral Royal Selection Anejo 18 Rothschild Masivo provided a short blast of black pepper.  Once the pepper settled down, notes of leather and cocoa surfaced.  The black pepper moved to more of a secondary flavor as it was more present on the retro-hale and after-draw.

During the first third, the cocoa and leather notes alternated in intensity as to what was the more prominent note.  By the second third, a cream note surfaced in the background which made the flavors more smoother.

Later in the second half, some cedar notes surfaced.  The cedar notes had both sweet and spice qualities and became the primary flavor in the last third.  The cocoa notes continued to float in and out.  The cedar pretty much replaced the leather notes. The pepper remained present on the retro-hale.   By this point the cigar had transitioned and lost its smoothness from the second third. This is the way the Balmoral Royal Selection Anejo 18 Rothschild Masivo came to a close.  The resulting nub was cool in temperature and firm to the touch.

I found the Balmoral Royal Selection Anejo 18 Rothschild Masivo to be a well constructed cigar and this was reflected on both the burn and draw. Both attributes scored very nicely with this cigar. The burn line remained on the straight side requiring little in the way of touch-ups. The ash had more of a darker gray color with some darker speckling mixed in. The ash was quite firm – not prone to flaking or flowering. The burn rate and burn temperature were both ideal.

The draw had a touch of resistance – which is something I like on it.  This was not a high maintenance draw and I found that slight resistance allowed me to control the pace for which I smoked this cigar.

Given the Balmoral Royal Selection Anejo 18 line was something originally geared for the European market, I wasn’t expecting a nicotine bomb – and the Anejo 18 Rothschild Masivo lived up to my expectations for this attribute. I found this cigar to start out mild to medium in strength and it progressed to medium strength by the second third. The body of this cigar pretty much mirrored the strength – starting out mild to medium and in the middle third it progressed to medium. While the body did slowly increase as the cigar burned, it never got out of the medium range. As for looking at strength versus body, both attributes countered each other nicely with neither overshadowing the other.

Overall I found the Balmoral Royal Selection Anejo 18 to be a very nice cigar. This cigar is a good example of a maduro cigar that is not going to overpower you. It’s sweet spot is going to be to appeal to those looking for a offering in the medium / mild to medium range in terms of strength and body. As I mentioned up front, there isn’t going to be anything radical about the flavor profile. The fact that this cigar has a $12.00 price point doesn’t effect the numeric score, but it certainly doesn’t help this cigar when it is one of many cigars competing for precious shelf space. Still there are some positives with this cigar. This is a cigar I’d certainly encourage trying and see what you think.