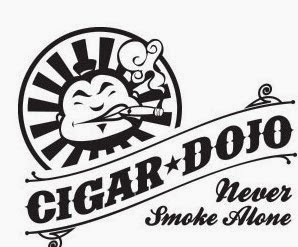 The Cigar Media Association has named its 2014 Cigar Media Member of the Year.  Cigar Dojo the online media brand that features an mobile social media community, the live Smoke Night Live show, online cigar reviews, and has partnered on several cigar projects was named the first recipient of this award.

In a statement by the Cigar Media Association:

When the Cigar Media Association members discussed the concept of presenting awards, it was easy to say that we wanted a Cigar of the Year Award and a Brand of the Year Award. Those two are givens, but we wanted to offer a third award for the first year. We discussed the options available, and there are plenty, but what we kept throwing out there was an award for the Media Member of the Year. We thought it was a great way of recognizing online media, and also recognizing the work that we all put into the cigar industry. We all have our own styles and methods, each great in their own way, but we wanted to recognize a media member for the excellent work they did in that year. Every company has internal awards- most sales, most improved, etc., and we wanted to have an internal award as well where we could recognize the great work that he or she did for the industry that year. This is the first time this has been done, no online media outlet has ever done this, and we believe it says a lot about who is in the Cigar Media Association and what we stand for in doing it. There were a lot of great nominees for this award, we think that everyone involved in the association is contributing a great quality, but at the end we picked a winner with Cigar Dojo.

Master Sensei and the Cigar Dojo crew are doing terrific work right now and have a very unique approach to the industry. They are groundbreaking in many ways, and they are media member who is reaching out to the industry like no other. While most media members are website focused, Sensei is reaching out to the industry through the Cigar Dojo app on mobile devices and tablets, reaching consumers on the go. They have taken on a mission statement of “Never Smoke Alone”, and to this day have been accomplishing just that with their ever growing community. Along with the app, Master Sensei host his own show, Smoke Night Live, a show dedicated to and for the members of Cigar Dojo, DOJONATION. Continuing down this road of success, Cigar Dojo has lead and been involved with cigar releases to the market such as the Undercrown Dogma with Drew Estate and Smoke Inn, the Sarsparilla with Espinosa Premium Cigars and Famous Smoke Shop, and has had a cigar made in its honor with the La Jugada Nunchuck by Moya Ruiz Cigars. Cigar Dojo is a member of the online media that is truly going places, and the Cigar Media Association is pleased to have them on board. We are thrilled to announce the 2014 Cigar Media Association Award for Online Media Member of the Year.

On January 2nd, the Cigar Media Association announced its nominees for its 1st Cigar Industry Awards. The purpose of these awards are to honor and celebrate the companies and individuals in the cigar industry. It marks the marks the first time a collaborative effort among various brands of the cigar media have come together for such a process. Cigar Coop / Stogie Geeks is a founding member of the organization.