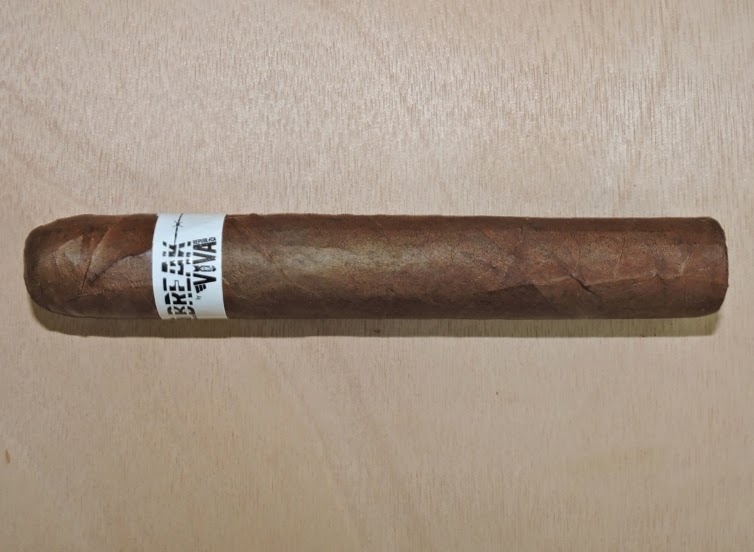 The Jailbreak by Viva Republica is a new limited release for Jason Holly’s Viva Republica Cigars. It was back at the 2014 IPCPR Trade Show where we learned of a project called Jailbreak. At the time, we learned that Jailbreak would be a cigar that would commemorate the retirement of someone special as well as feature both a double wrapper and double binder. Once the Jailbreak was officially announced, we learned that someone special was Holly’s stepfather who recently retired as Superintendent of the Dallas State Correctional Institution. We also learned that the reason why Jailbreak would feature the double wrapper and double binder is that it is actually a cigar within a cigar. Jailbreak takes a rolled lancero cigar and then rolls that lancero inside a 6 x 58. While some may say it is gimmicky, I say this is innovation – and this is shown in the final product. I found that the Jailbreak delivered a very enjoyable and flavorful cigar.

The name Jailbreak not just commemorates Holly’s stepfather, but it also is appropriate to the project itself. Holly describes this as Jailbreak being “a new concept in where a Lancero is buried inside of a 6’X 58 cigar trying to escape”. The project starts with the construction of a lancero cigar. After the lancero is rolled, the cigar is aged before being re-rolled inside a 6 x 58. Once the 6 x 58 is constructed the cigar is aged again.

Without further ado, let’s take a closer look at the Jailbreak and see what this cigar brings to the table.

Most of the components of the blend are kept abstract. We do know that the two wrappers that are a part of this cigar are Dominican Corojo and Ecuadorian Habano. There are also two undisclosed binders used on the Jailbreak. Between the lancero and the outer component, there are a total of ten cigars.

As with all Viva Republica Cigars, they are made at the La Aurora factory in the Dominican Republic.

As mentioned, the Jailbreak is being made available in one size – a 6 x 58. The cigar is being packaged in 20 count boxes and a total of 300 boxes.

The external wrapper to the Jailbreak has a coffee bean color with some colorado red mixed in. Upon closer examination some darker marbling can be seen on the surface.  There is a light coating of oil on the wrapper. The wrapper has a slightly bumpy feel. There are some visible veins and thin wrapper seams. Overall I found the external wrapper of the Jailbreak to be on the thicker side.

From examining the footer, it appears to look normal. There was an irregular rounded leaf that could be the lancero, but I couldn’t tell for sure.

The wrapper has a white background with black font. The text “JAILBREAK” is prominently displayed on the front with some white streaks going through it. There is an electric wire like design to the left and right of the text. Just below it is the text “by” in very small font. To the right of that text is the text “VIVA” in large font. On that text there is a wing on the left axis of the “V” and a bomb like logo on the “I”. Going along the right axis of the “A” is the text “REPUBLICA” in small font.

Prior to lighting up the Jailbreak, I went with my usual choice of a straight cut to remove the cap. I had wondered if I would be able to remove the cap cleanly given there was a cigar insider a cigar, but this proved to be no problem as the cap came off cleanly each time. Once the cap was removed, I moved on to the pre-light draw. The dry draw produced a nice combination of cedar, chocolate, cedar, and black cherry flavor. Overall I considered the pre-light draw to be excellent. At this point I was ready to light up the Jailbreak and see what the cigar experience would have in store.

The start to the Jailbreak provided quite a bit of flavor right out of the gate. Some caramel notes surfaced in the forefront early on. I also detected some notes of coffee and a combination of red and black pepper. I did find the black pepper component of the spice to be more prominent on the retro-hale.

The caramel continued to be primary during the first third.  I also picked up some honey notes in the background. The pepper and coffee notes remained in the background. While the caramel and honey provided some sweetness, it never got overwhelming on the palate and it very much had a tobacco taste.

During the second third, the coffee and earth notes joined the caramel in the forefront. The honey and red pepper notes remained secondary. In the second half, I saw the caramel notes start to diminish and the honey notes pretty much dissipate.

The last third saw the coffee and earth combination remain primary. The pepper notes in the background took on more of a baker’s spice quality. The caramel notes were now also secondary and combined with the baker’s spice helped the Jailbreak maintain its sweetness right until the end. By the very end, the Jailbreak was pretty much yielding notes of coffee, earth, and spice. The end of the cigar had no harshness. The resulting nub was soft to the touch and cool in temperature.

As for the burn goes, while I did find it to be on a straight path, there were times it did require frequent touch-ups to keep it straight.  This wasn’t a bad burn by any means, but more of a higher maintenance burn.  This seemed to be more of an issue with keeping a thicker wrapper on a big ring gauge burning straight, than an issue with the cigar inside the cigar.  I did find the internal combustion of this cigar to be excellent – and the cigar had an ideal burn rate and burn temperature.  The resulting ash had a silvery gray color.  It was not an overly firm ash, but not a loose or flaking ash either.

When drawing on this cigar, I really did not feel I was smoking a cigar inside a cigar. The draw was not too loose, not too tight.  In fact, this cigar had a better draw than most traditional 58-60 ring gauge gordo sized cigars.

From a strength perspective, I found the Jailbreak to be a solid medium throughout the smoking experience.  The body of the Jailbreak started out medium as well.  By the second third, there was just enough additional weight on the palate to progress this cigar into the medium to full-bodied range. If you are not one to retro-hale, you might not think the body hits the medium to full-bodied range. In terms of strength versus body, I gave the edge to the body.

When the details of the Jailbreak cigar first hit the market, I was very supportive of such a project.  This is a breath of fresh air for the cigar industry.  I’d much rather see something new and innovative come along than yet another San Andres wrapper cigar being sold to me as the greatest thing since sliced bread.  I always say if a watch does an excellent job at telling time, then to me it doesn’t matter how it is built inside.  The bottom line is the Jailbreak is an excellent cigar. Perhaps the most interesting thing will be to see if this concept starts a trend in the cigar industry.

Overall, the Jailbreak is a cigar I’d recommend to an experienced or novice cigar enthusiast. If someone is not a fan of large ring gauges, I’m not sure this will win them over, but I’d still encourage them to try. I’m curious to see the long-term aging on this cigar. In the meantime, this is a cigar that I’d smoke again – and one that I’d consider a box split for.