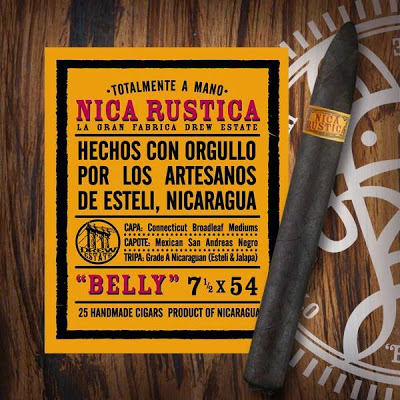 Drew Estate Tobacco Company has announced its first line extension to its Nica Rustica brand. ;Today the company announced that the Nica Rustica Belly, a 7 1/2 x 54 belicoso will become the second frontmark in the Nica Rustica line. The brand will launch nationally this September with a soft-launch planned for an July 30th event by Cox’s Smokers Outlets at the Louisville (Kentucky) Water Tower Park.

Nica Rustica was launched at the 2013 IPCPR Trade Show in a 6 x 52 Toro vitola known as “El Brujito”. The cigar was introduced as a value-priced line consisting of a Connecticut Broadleaf wrapper, Mexican San Andres binder and Nicaraguan fillers from the Jalapa and Esteli growing regions.

Like El Brujito, the cigars will be packaged in 25 count black craft paper bundles that fit into a display tray that is intended for retail use.

In a press release, Jonathan Drew said “Nica Rustica is a tribute to Esteli’s hard working cigar culture. Behind all the glitz and glam, there are thousands of factory Buncheros and Rolleros who keep their game strong and consistent to maintain Esteli, Nicaragua’s respected stature of ‘Mecca of Cigars’. The long awaited size, ‘Belly’, is a king of a Belicoso at an affordable price.”

The July 30th event Louisville Tower Water Park will provide attendees the opportunity to purchase a 25 count Nica Rustica Belly bundle for $198.75 ($7.95 per cigar).  Attendees at that event will receive two Belly cigars with the price of their ticket.

At a glance, here is a look at the Drew Estate Nica Rustica line: