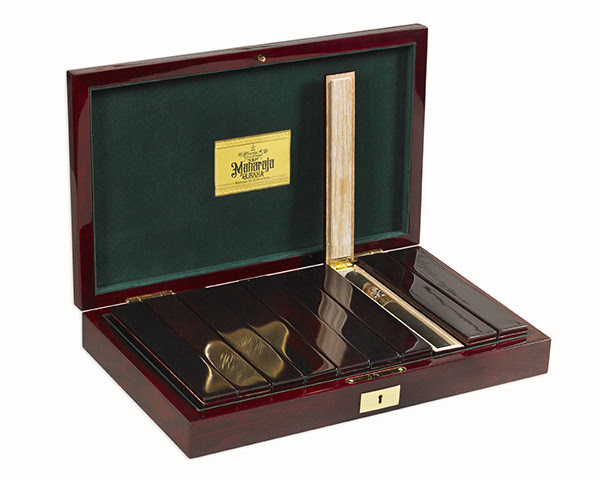 Earlier this year, Gurkha Cigars announced a new ultra-premium offering known as a the Maharaja. For this cigar, it is raising the bar on “most expensive cigar”. The Maharaja will carry a price point of $2,000 per cigar! Additional details have now been released on the cigar – including the packaging. It is anticipated that the cigar will be showcased at the 2015 IPCPR Trade Show.

Gurkha’s original entry into this market was the Gurkha ‘His Majesty’s Reserve’ which has been priced at the $1,000.00 mark. The price point of that cigar is driven by the fact that each cigar is infused with Remy’s Louis XIII Cognac which sells for $2,400.00 a bottle. Unlike the ‘His Majesty’s Reserve’, the Maharaja will not be infused. The company is saying this cigar uses some of the finest tobacco available.

The cigar is described as a maduro offering over Dominican binder and filler. The cigars are packaged in individual piano-finished mahogany coffins. There will be ten coffins in a mahogany wooden humidor that will be priced at $20,000.00.

The limited edition ‘Maharaja’ has set a new precedent for premium tobacco,” said Kaizad Hansotia, founder and CEO of Gurkha Cigars. “We’re excited to be able to pair these rare leaves in such a magnificent and flavorful way. It’s been a while since our first release of the ‘His Majesty’s Reserve’ in 1996 and we know this new luxury cigar will set a new standard for an exclusively luxurious smoke to become the ‘king’ of all cigars. I couldn’t be more proud of what we’ve accomplished with the ‘Maharaja.'”