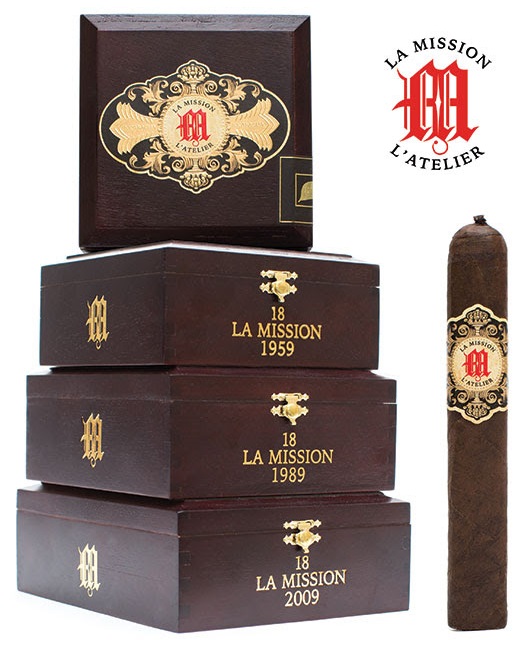 At the 2015 IPCPR Trade Show, L’Atelier Imports will La Mission du L’Atelier. La Mission will be a line that draws its inspiration from the wine industry.

The name La Mission comes pays homage to a French winery called Château La Mission Haut-Brion. This winery is located in the Pessac-Leognan region – located just southeast of Bordeaux. This winery is known for producing some very full-bodied cigars and the La Mission line is intended to be fuller offering by L’Atelier Imports.

It is perhaps the vitola names that are most interesting.  La Mission du L’Atelier is being launched in three sizes, each named for a vintage year when the Château La Mission Haut-Brion wine received a 100 point designation by Robert Parker. Parker is well known in the wine industry for his “Parker Points” – an assessment scale of various wines. The 100 point rating is the highest ranking on this scale and a wine with this rating is considered “extraordinary”.  Château La Mission Haut-Brion has earned this honor seven times. The three sizes being released are named for the years 1959, 1989, and 2009 when the winery received this honor. Vitolas are planned in the future for La Mission du La’Atelier with the names 1955, 1982, 2000, and 2005 – the other four times the winery earned this honor.

The line will also feature new band and packaging designs.

As with all L’Atelier branded cigars, the blend contains Sancti Spiritus tobacco:

La Mission du L’Atelier is being launched in three sizes. Each will be a box-pressed cigar with a pig-tail cap. The cigars are packaged in 18 count boxes.