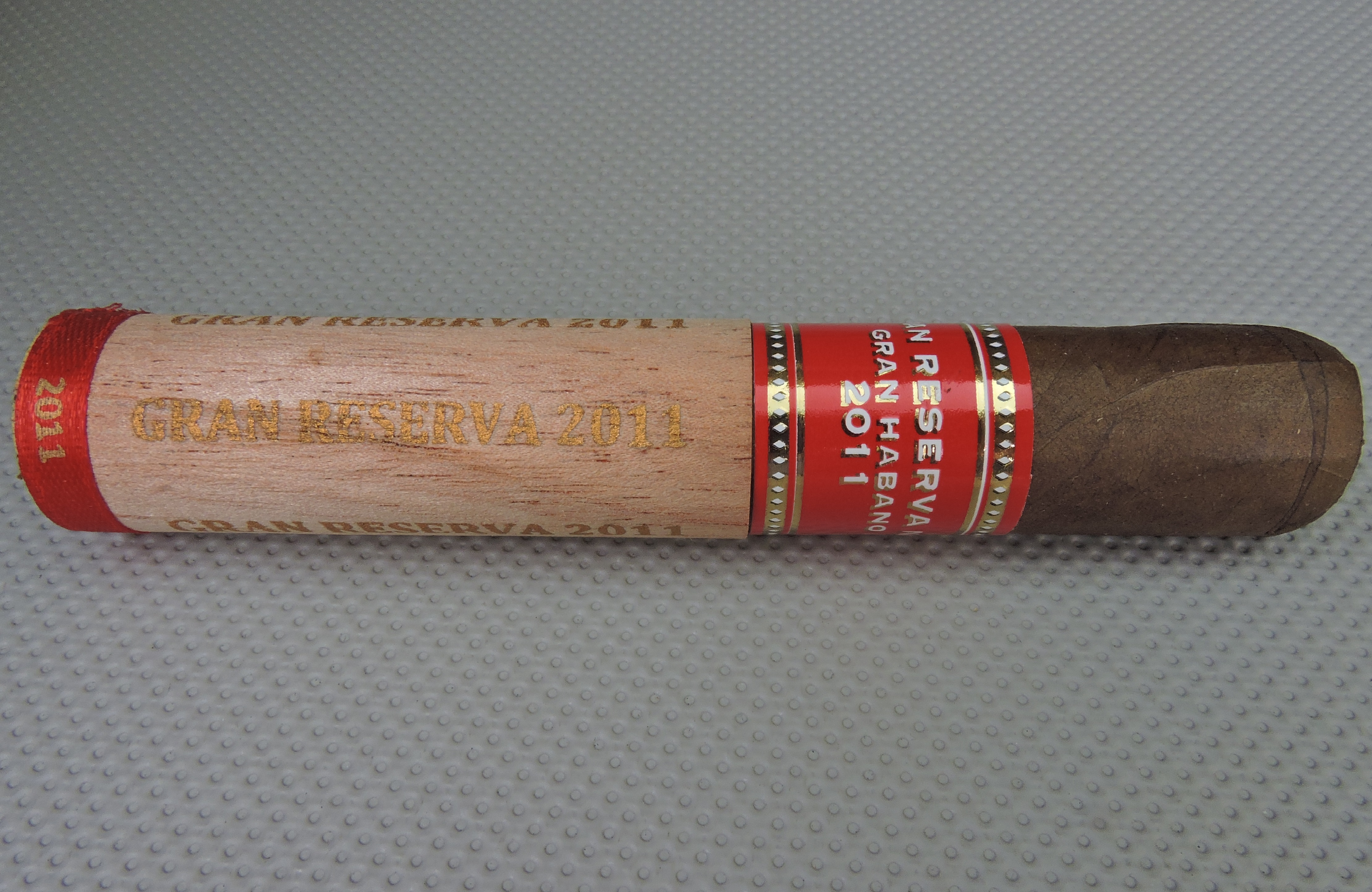 2015 has been a busy year for George Rico and Gran Habano cigars as there have been plenty of new projects hitting the market. These cigars include: Private Humidor Selection by George Rico, George Rico S.T.K. Miami Zulu Zulu Mas Paz as well as line extensions to the G.A.R Red and Gran Habano Corojo #5.

Now let’s turn our attention to the Gran Habano Gran Reserva #5 2011 Gran Robusto and see what this cigar brings to the table.

The wrapper of the Gran Habano Gran Reserva #5 2011 Gran Robusto has a rich coffee bean color to it. Upon closer examination there was some darker marbling on the surface. The Gran Robusto was quite smooth looking and had a thin coating of oil on it. The cigar had very few visible veins, and any that were visible were quite thin. Most of the wrapper seams were also well hidden. 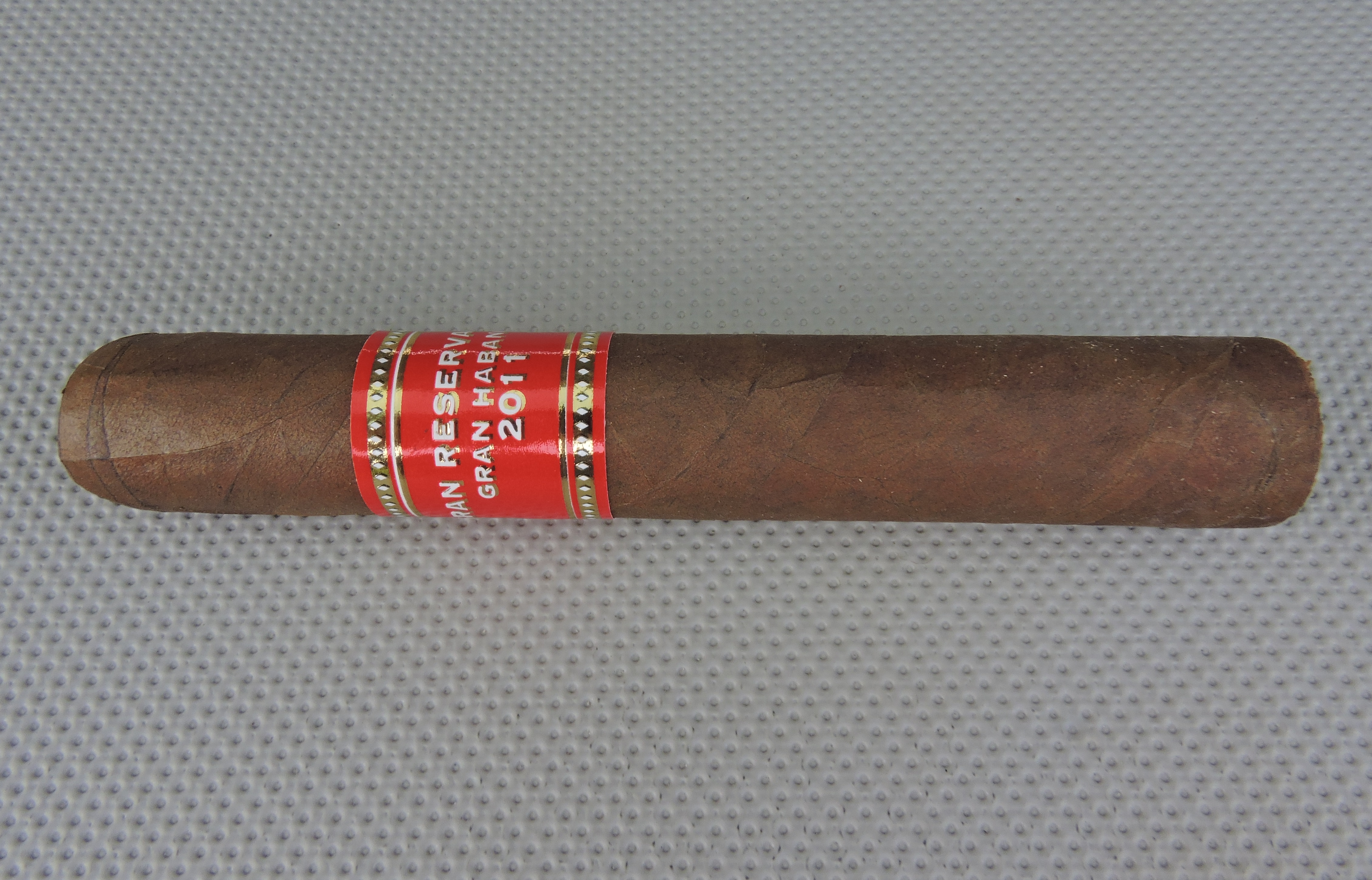 The Gran Habano Gran Reserva #5 2011 has a red colored band.  On the band is the text “GRAN RESERVA GRAN HABANO 2011” in white font.  There is a white pinstripe on the middle of the band on both the left and right side that extends away from the text.  Just below the left side is the text “Hand Made” in black, near cursive-like font.  To the right is the text “By George Rico” – also in a black, cursive-like font.  There are two gold pinstripes on both the top and bottom portions of the band.  The pinstripes closest to the top and bottom of the band contain a rivet-like pattern.

Prior to clipping the cap of the Gran Reserva #5 2011 Gran Robusto, I first removed the cedar sleeve.  I then went with my usual straight cut option.  Once the cap was removed, I moved on to the pre-light draw.  The cold draw was a little muted at first, but once it got going it delivered some really nice flavors of cocoa, baker’s spice, and pepper.  In the end, I considered this to be a very good pre-light draw.  At this point I was ready to fire up this cigar and see what the cigar experience would have in store.

The Gran Reserva #5 2011 Gran Robusto started out with some notes of cocoa powder.  This was soon joined by some notes of cedar sweet spice and a touch of black cherry in the background.  The cocoa notes were the dominant ones in the early stages.  Meanwhile the retro-hale added a secondary layer of cedar to the cigar experience.

Later in the first third, both the cedar and cherry notes increased. The cedar increased a more rapid rate and by the second third it had joined the cocoa notes in the forefront.  The cherry notes became more prominent, but not enough to be considered a primary note.  By the second half, I also noticed a slight black pepper note that also began to increase in intensity.

By the last third, I found the cedar and black pepper notes to be in control. The cocoa and cherry notes both took a secondary role. While there was plenty of spice at the end of the cigar, there really was not much in the way of harshness.  This is the way the cigar experience came to an end. The resulting nub was firm to the touch and cool in temperature.

The burn of the Gran Habano Gran Reserva #5 2011 Gran Robusto performed quite well.  While there was some jaggedness on the burn line, the cigar maintained a relatively straight burn path from start to finish. The jaggedness was cosmetic and was easily remedied by a touch-up with the lighter. The resulting ash was a charcoal gray color. The ash itself was not overly tight, but not super loose either. The burn rate and burn temperature were both ideal. 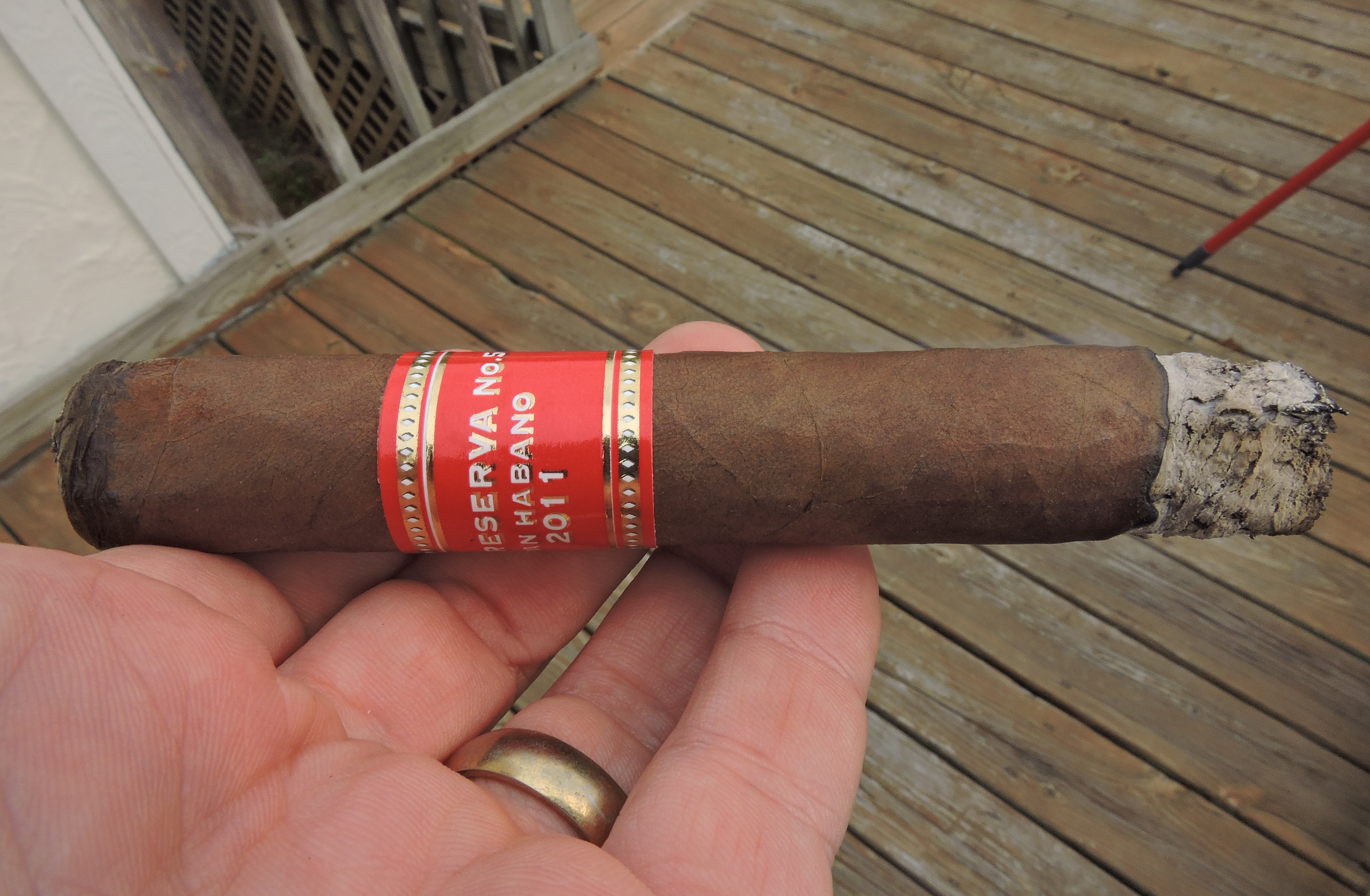 I found the draw to perform quite well on the Gran Reserva #5 2011 Gran Robusto.  I’d characterize it as an open, but not a loose draw. This was a low maintenance cigar to puff on and enjoy flavors.

The strength and body of the Gran Reserva #5 2011 Gran Robusto both started out in the medium range and both would increase in intensity. The body increased in a linear fashion on this cigar.  By the second third, the body had moved into medium to full territory and by the last third, the Gran Robusto was smoking as a full-bodied smoke.

The strength was a different story.  For the first 60 percent of the cigar, I pretty much found this to in the medium range.  It is during the last 40 percent where there was a dramatic sharp increase.  I found the Gran Robusto went from medium strength to full strength very rapidly. The cigar remained at full strength until the end of the cigar.

For most of the cigar experience, I gave the edge to body over strength, but during the last third the two attributes were more on equal footing.

Perhaps nobody in the business does a better job at delivering value in a cigar than George Rico and Gran Habano.  The company produces consistent cigars that can be enjoyed at any time. Depending on the size, the Gran Reserva #5 2011 line comes in between $7.50 and $10.00 and in my opinion it delivers the value I would expect in that price range.  On top of that, the cigar is excellent. I liked how the flavors meshed together with this cigar, and I liked how the cigar progressed in intensity. Even the strength kick in the later stages I felt was a positive. This is a cigar I’d probably still steer to a more seasoned cigar enthusiast because it is fuller toward the end, but if novices want to experience progression in strength and body, this is a great (and enjoyable) cigar to use as a learning tool.  As for myself, this is a cigar I’d smoke again and it’s worthy of a box split.