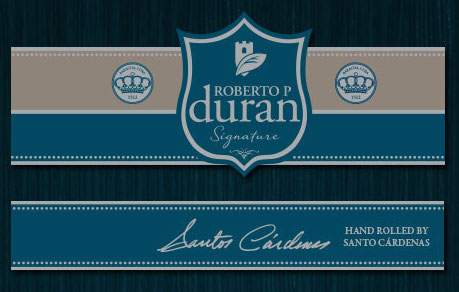 Duran Cigars has announced the details around the Roberto P Duran Signature Santo Cardenas Edition. This was a project that Marketing and Public Relatons Manager Jack Torano discussed on Episode 144 of Stogie Geeks. The Santo Cardenas Edition is based off the original Roberto P. Duran Signature blend and is in the form of a 7 1/4 x 57 Salomon vitola. The cigar will officially be launched at the 2015 IPCPR Trade Show.

Duran Cigars also showcased the new banding for the Roberto Duran Signature line – which is a rebanding of the Roberto P. Duran Premium line. The Santo Cardenas Edition features the new band as well as well as a secondary band unique to this particular cigar.

As with al Duran Cigars, the cigar is made at the company’s Nicatabaco factory in Esteli, Nicaragua.

In a press release announcing the projects, Duran Cigars owner Roberto Pelayo Duran commented, “Anyone that follows the history of the Cuban Cigar industry is well aware that Santo Cardenas is one of the very top Cuban Cigar rollers of all times. When it comes to the Salomon vitola, he is perhaps second to none. Santo has been rolling the most amazing cigars in Cuba for 55 years and he has been showcased in over 30 countries! For us that are close to him, it is only natural to see that he has chosen the Salomon to be the first vitola to carry his signature. That says it all! We look forward to introducing this masterpiece to the public at the IPCPR in New Orleans this July, booth 16028.”

At a glance, here is look at the Roberto P. Duran Signature Santos Cardenas Edition:

As mentioned the Salomon comes in a 7 3/4 x 57 format.The blend to the Salomon differs from the sizes in the rest of the line. These sizes include: