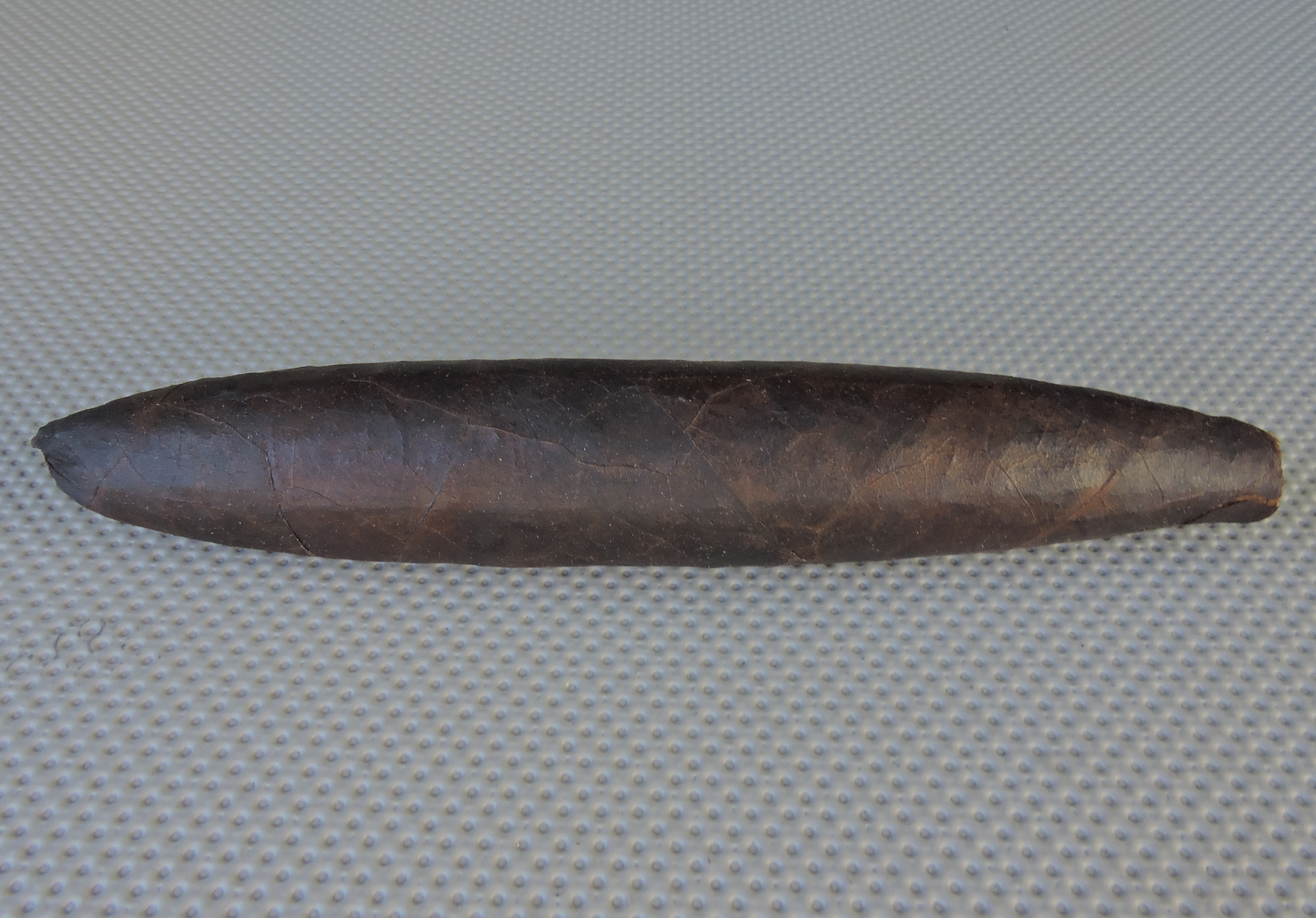 At the 2015 IPCPR Trade Show in New Orleans, LUJ Cigars will release a special offering called the Kuro. Founded by Luj Oluyeba, the company has established a foothold in the midwest. This year LUJ Cigars will be at its first IPCPR Trade Show with hopes of expanding its footprint. To accomplish this, the company will be launching four lines with the Kuro being one of them. LUJ is a company focused on small batch production. With the case of the Kuro, this will be one of the company’s most premium offerings – and one of the most limited. Recently I’ve had an opportunity to smoke a pre-release of the LUJ Kuro in the perfecto format. In my book, LUJ Cigars has been among the best brands I’ve discovered in 2015. With the Kuro, this is truly a special release and stands as the best release I’ve had from an already impressive portfolio.

On Episode 143 of Stogie Geeks, Luj and his Chief Operating Officer Sean Young were our special guests and gave some background on the Kuro. The Kuro is a project that has been two years in the making. The Kuro originally started out as a private blend that was used for some corporate gifts in Japan. After the cigar was well received in Japan, some test marketing was done by LUJ Cigars and the feedback was overwhelmingly positive. A decision was then made to put the cigar into production.

While not pictured, plans are for each Kuro cigar to be individually packaged in a coffin. Five coffins will be packaged in “Krates”. The Krates will be offered to the company’s LujNation platinum accounts. Production will be limited to 400 Krates for 2015. At press time, the company is finalizing the design of the coffins.

Since the portfolio of LUJ Cigars is based on small batch releases, the company’s blends are built on (more) finite supplies of tobacco. Once tobacco supplies become exhausted, the company makes not only adjustments to its blends, but to its branding. Thus, one can expect there will be a point that once the tobacco supplies are no longer there, the Kuro name will be retired.

We now take a closer look at the LUJ Kuro in the perfecto size and see what this cigar brings to the table. Since we assessed a pre-release cigar, we will default to our “pre-review” format to share our thoughts and perspectives. After the cigar hits retailers, the cigar will be given an assessment rating and score.

The company does not disclose details of the tobaccos in their blends. LUJ Cigars are produced out of the Dominican Republic.

The LUJ Kuro is being launched in three sizes: Toro, Perfecto, and the “00” (pronounced double ohh and measuring at 7 x 48).

The LUJ Kuro Perfecto has a dark roasted espresso colored wrapper. Upon closer examination some marbling can be seen on the dark wrapper. The wrapper has an oily complexion and the surface is quite smooth. There are some visible veins as well as some thin visible seams on the wrapper. The perfecto has a small open ended footer. The cigar is tapered by the cap and the footer, but the tapering toward the cap is more gentle.

The pre-release sample we received was unbanded.

Prior to lighting up the LUJ Kuro Perfecto, I elected to use a straight cut. In particular, I used my Credo Special T cutter with the 36 ring gauge hole to get an ideal cut for this perfecto. After I clipped the tip, I moved on to the pre-light draw. The cold draw yielded a mix of roasted coffee and earth notes. There wasn’t much in the way of spice on the pre-light, but overall I was quite pleased with the pre-light experience of the Kuro. At this point I was ready to light up the LUJ Kuro Perfecto and see what the overall smoking experience would have in store.

White pepper was the initial flavor out of the gate with the LUJ Kuro Perfecto. I wouldn’t categorize it as a typical “pepper blast”, but it was still the primary flavor. The pepper quickly subsided and soon mocha flavors emerged. The mocha was what I consider a “compound note” – having qualities of roasted espresso syrup, coffee, and chocolate. Meanwhile the pepper was also prominent on the retro-hale.

Throughout the first half the components coffee, espresso syrup, and chocolate components of the mocha compound note varied in intensity. In addition to the pepper in the background, I also picked up some earth notes.

By the midway point, I found the earth notes moved into the forefront with the mocha components, and  later in the second third, I found the earth notes became the primary flavor. The mocha components had receded into the background, but still very much contributed to the profile. There was a slight increase in spice, but the cigar never became a spice bomb. This is the way the cigar experience came to a close. The resulting nub was outstanding for a perfecto – firm to the touch and cool in temperature.

Sometimes I will clip the tip of perfecto if it is closed at the footer or very small to get a good burn.  The Kuro Perfecto has a very small open footer, but I opted to just light up the cigar instead of clipping more of the footer. This proved to be the right choice.  Overall I got a low maintenance burn from start to finish. The burn path remained straight and the burn line itself stayed relatively sharp.  The resulting ash was firm and came off the cigar in clean chunks. The ash itself had a salt and pepper color scheme to it. The burn rate and burn temperature were ideal. 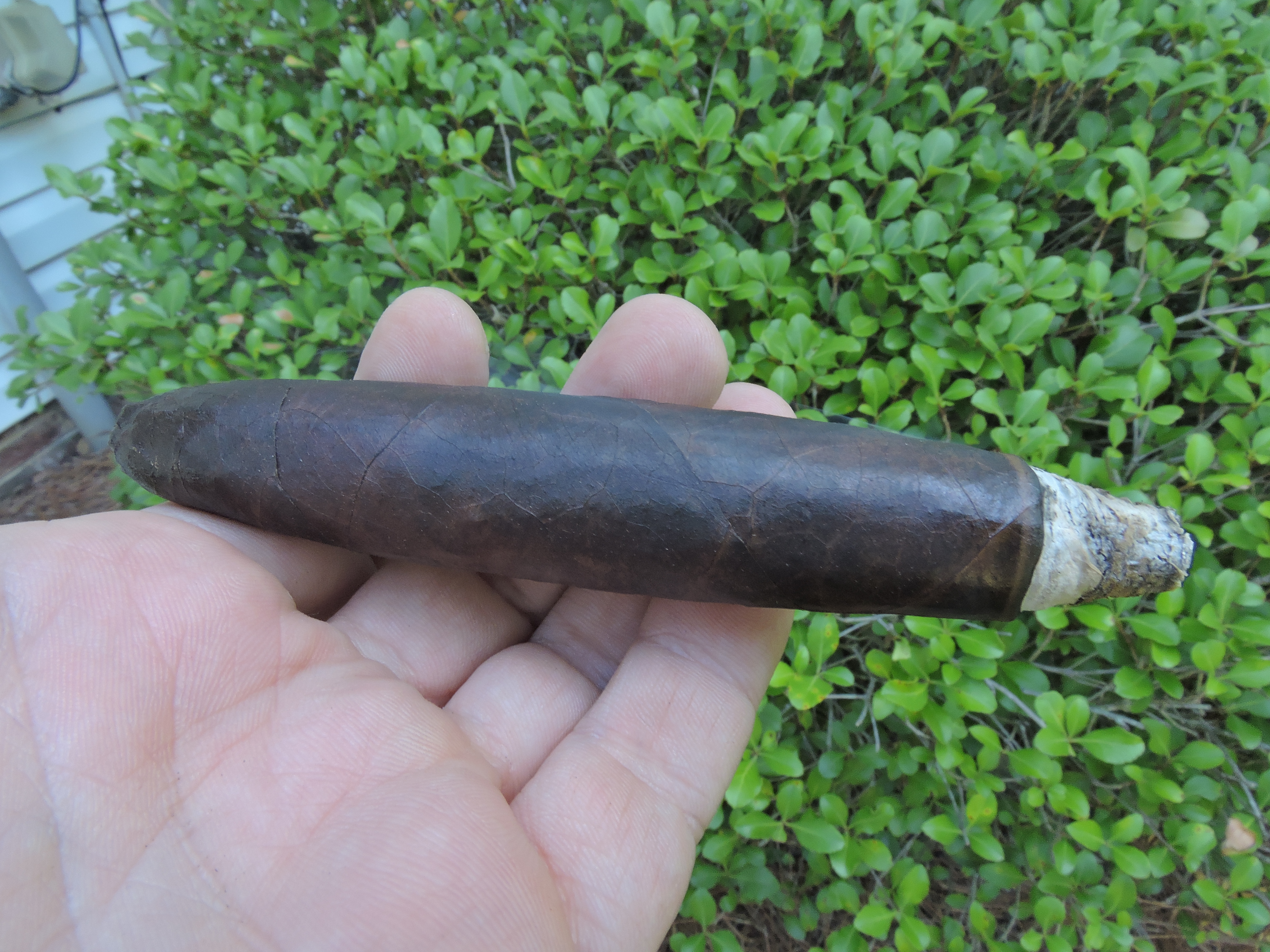 The draw to the Kuro Perfecto was also outstanding. It was not too loose, nor was it too tight. I liked the fact the tip of my perfecto did not get soft. There was also an ample amount of smoke produced with this cigar.

In general, I’ve found most of the offerings from LUJ Cigars to not be nicotine bombs, and emphasize flavor. From looking dark wrapper of this perfecto, I was a little intimidated as this might be a full strength, full-bodied smoke. Instead, I got a cigar that was medium in strength and medium in body. I found the medium / medium profile worked beautifully with the abundant flavors of the Kuro. The strength and body also balanced each other nicely with neither attribute overshadowing the other.

This was a very enjoyable cigar – and it was very different than any of the other offerings I’ve had from the LUJ portfolio before. The cigar delivered a well-balanced, rich profile of mocha, earth, and spice.  I especially liked the fact that this was a medium-bodied smoke. This is a very clean cigar on the palate – and there is no lingering after-taste. I have to say this was a very well constructed perfecto. I also found the combustion on this cigar to be excellent.  This is a cigar I would recommend to a novice or experienced cigar enthusiast.  While this will be one of the more pricier offerings by LUJ, this is certainly worth taking a plunge as it will deliver an enjoyable cigar. As for myself, this is easily a cigar I’d smoke again – and look forward for it hitting retailers.