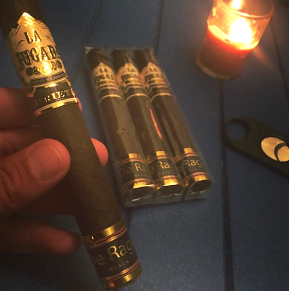 Mike “Mikey Black” DeRago, owner of Nero’s Cigars in Haddonfield, New Jersey who passed away in March, 2015 was honored with a commemorative edition of the La Jugada Prieto cigar. MoyaRuiz Cigars co-owner Danny Moya along with Rene Castaneda of Orleans Group presented DeRago’s sister Christine a special box of the La Jugada Prieto. The cigars in the box contain a special footer band in honor Mike DeRago.

DeRago was a known fan of the La Jugada Prieto and made no secret it was his favorite cigar.

La Jugada Prieto is best known for being the debut cigar by MoyaRuiz Cigars. The cigar made its debut back in 2013 and is made by Erik Espinosa’s La Zona factory.