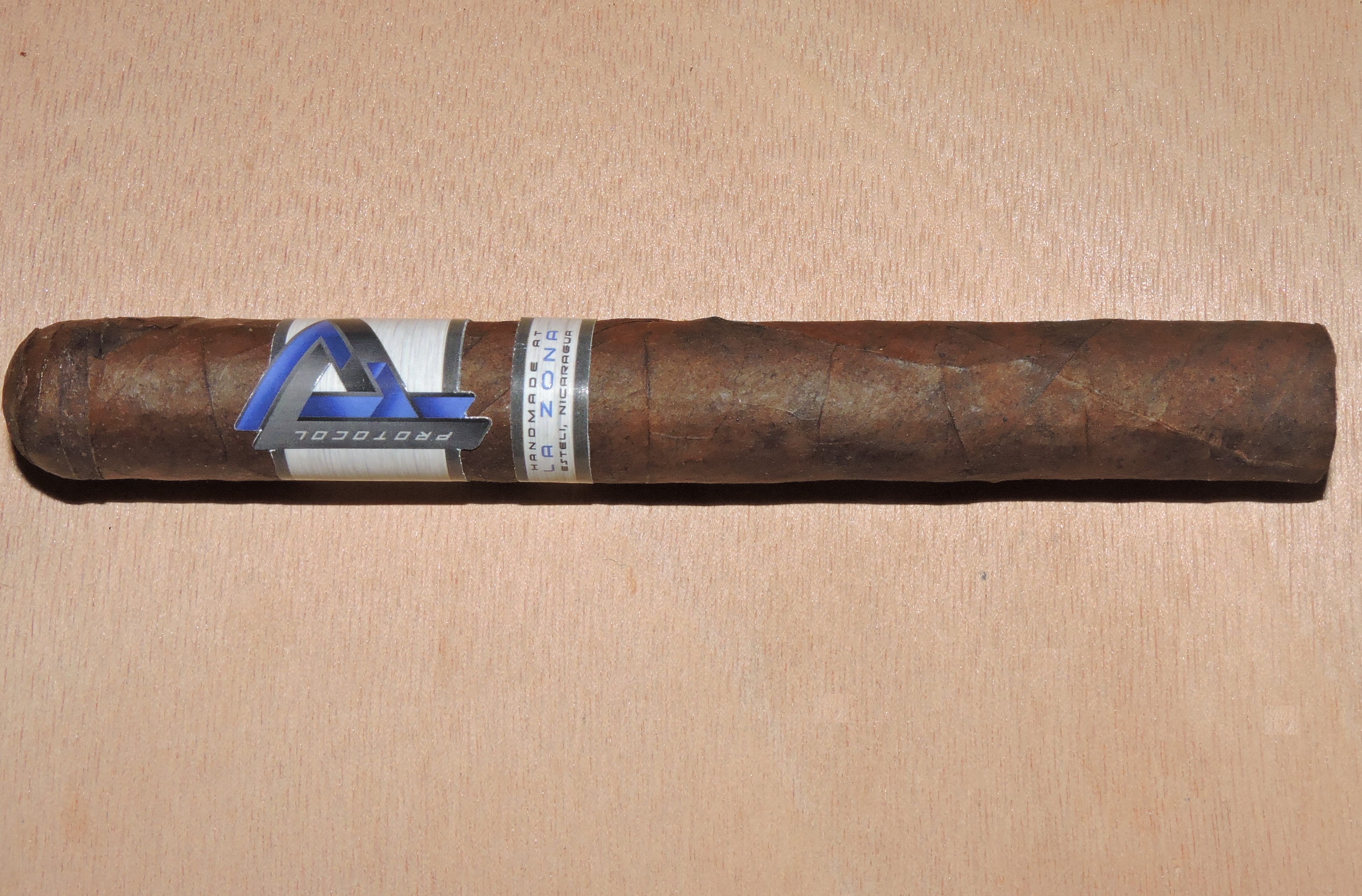 When Protocol was released in May, Cubariqueno did a small batch run of 5,000 cigars. The cigars were released to a select number of retailers in New Jersey. The company did a slightly larger small batch run (this time 6,000 cigars). The plan was to go to the 2015 IPCPR Trade Show and open 20 accounts and the company exceeded this milestone.

Without further ado, let’s break down Cubariqueno’s Protocol Corona Gorda and see what this cigar brings to the table.

The blend is highlighted by the use of four ligero leaves in the filler. According to Cancel, “Quadruple Ligero sounds super strong but it is well balanced with great flavor.”

The Ecuadorian Habano Oscuro wrapper of the Protocol Corona Gorda has a shade of brown in the “medium to dark” brown range with a rosado tint to it. The wrapper is slightly bumpy, but it also gives the cigar some charm. There is also a light coating of oil creating a nice sheen on the cigar. There are some visible veins as well as some thin visible wrapper seams.

As I typically do, I went a straight cut to commence the cigar experience. Once the cap was removed I moved on to the pre-light draw. The cold draw of the Protocol Corona Gorda delivered notes of cocoa, floral, natural tobacco, and a slight cedar spice. Overall, I considered this to be an excellent pre-light draw. At this point I was ready to light up the Protocol Corona Gorda and see what the smoking experience would deliver.

The Protocol Corona delivered a mix of chocolate and natural tobacco right out of the gate. There were also some background notes of baker’s spice and a citrus note that almost had a sweet grapefruit quality to it. The citrus notes increased in the early stages and joined the chocolate and natural tobacco notes in the forefront. Meanwhile the retro-hale layered some notes of cedar and pepper into the flavor profile.

By the end of the first third of the Protocol Corona Gorda, the citrus notes reached its peak and then started to move into the background. In the early stages of the second third, I found the chocolate and natural tobacco back in the forefront. There was a little bit of a sharp pepper note that I could also detect on the tongue with the baker’s spice.

During the later stages of the second third, the chocolate notes became more earthy. These earth notes along with the natural tobacco remained the primary notes. I did notice an increase in the baker’s spice and pepper. The citrus sweetness diminished greatly.

The final third saw the spices join the earth and natural tobacco in the forefront. I did find the flavors a little muddled toward the final stages of the cigar, but it was also a sign that the cigar experience was ready to come to a close. The resulting nub of the Protocol Corona Gorda was cool in temperature and slightly soft to the touch.

The burn to the Protocol Corona Gorda performed solidly. The burn pretty much took a straight path. There was a slight curvature from time to time on the actual burn line, but this was easily corrected with some touch-ups – and those touch-ups were not too frequent. The resulting ash had a near white color. It wasn’t an overly firm ash. There was some minor flaking, but this didn’t prove to be problem-some. The burn rate and burn temperature were ideal. 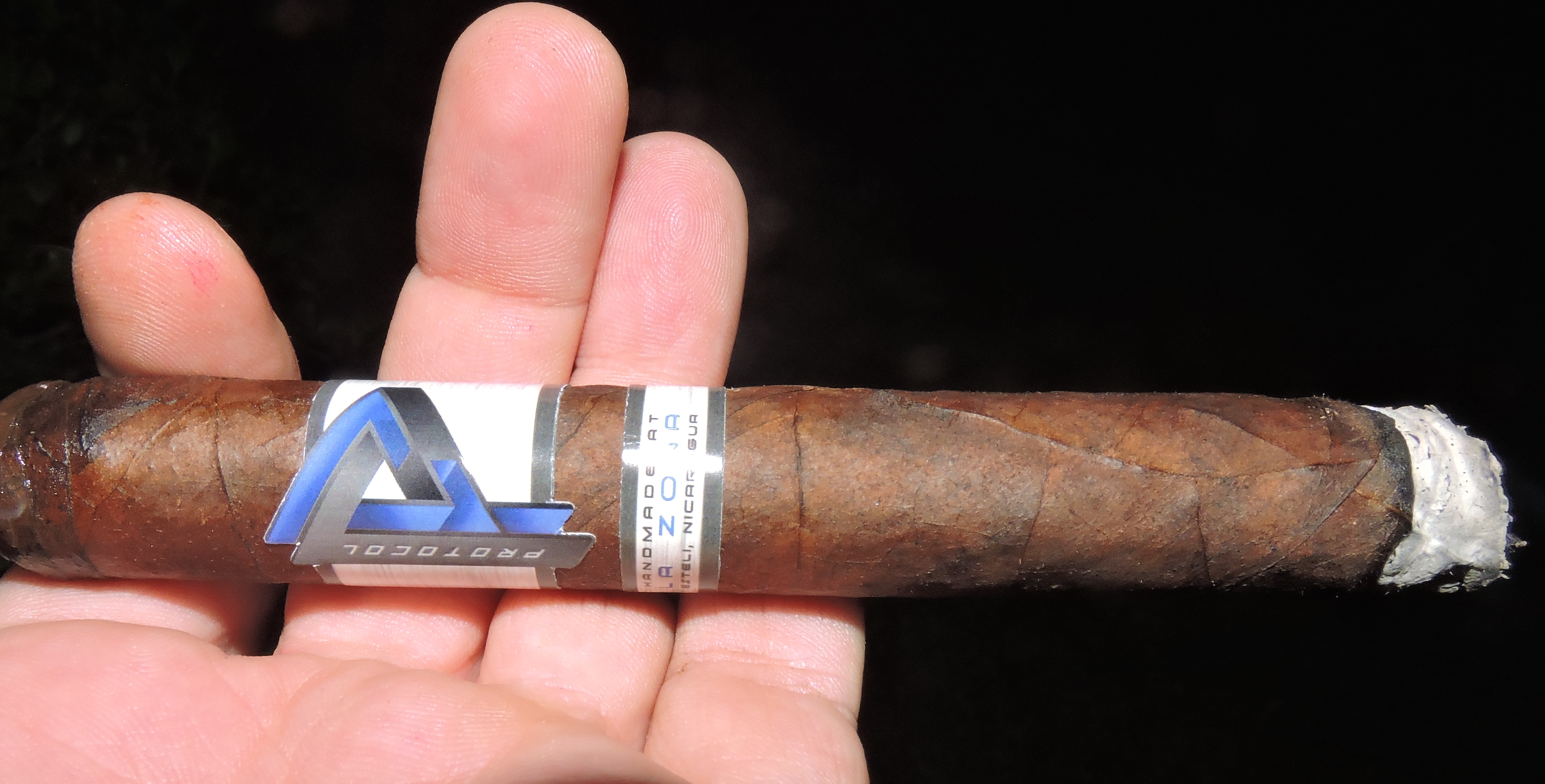 Burn of the Protocol Corona Gorda

The draw had a slight amount of resistance to it – something I do consider to be positive. Overall this was a low maintenance cigar to derive flavors from.

With four ligero leaves, I was expecting a cigar on the fuller side – and this is exactly what I got with the Protocol. The strength to the Protocol starts out in the medium to full range right away. I found the strength remained there until the last third where it had moved into full strength territory.

Meanwhile the flavors deliver quite amount of weight on the palate. I found this to be a full-bodied cigar out of the gate and there was actually an increase in body along the way. I can see some aging bringing the body down a bit and I can see that working in favor of this cigar. Overall the body had the advantage over the strength with this cigar.

Very simply, this is an extremely impressive debut for Cubariqueno Cigar Company.  I found this to be an excellent cigar that delivered very good flavor and offered up a nice amount of complexity. Espinosa’s La Zona is having an extremely impressive year, and the Protocol is another example of the great work coming out of this factory. This is also a cigar that seems to be catching the attention of many retailers who have a focus on carrying small batch cigars. I will say, this is a cigar I would steer toward a more seasoned cigar enthusiast. As for myself, it’s definitely a cigar I would smoke again – and one worthy of a box split.