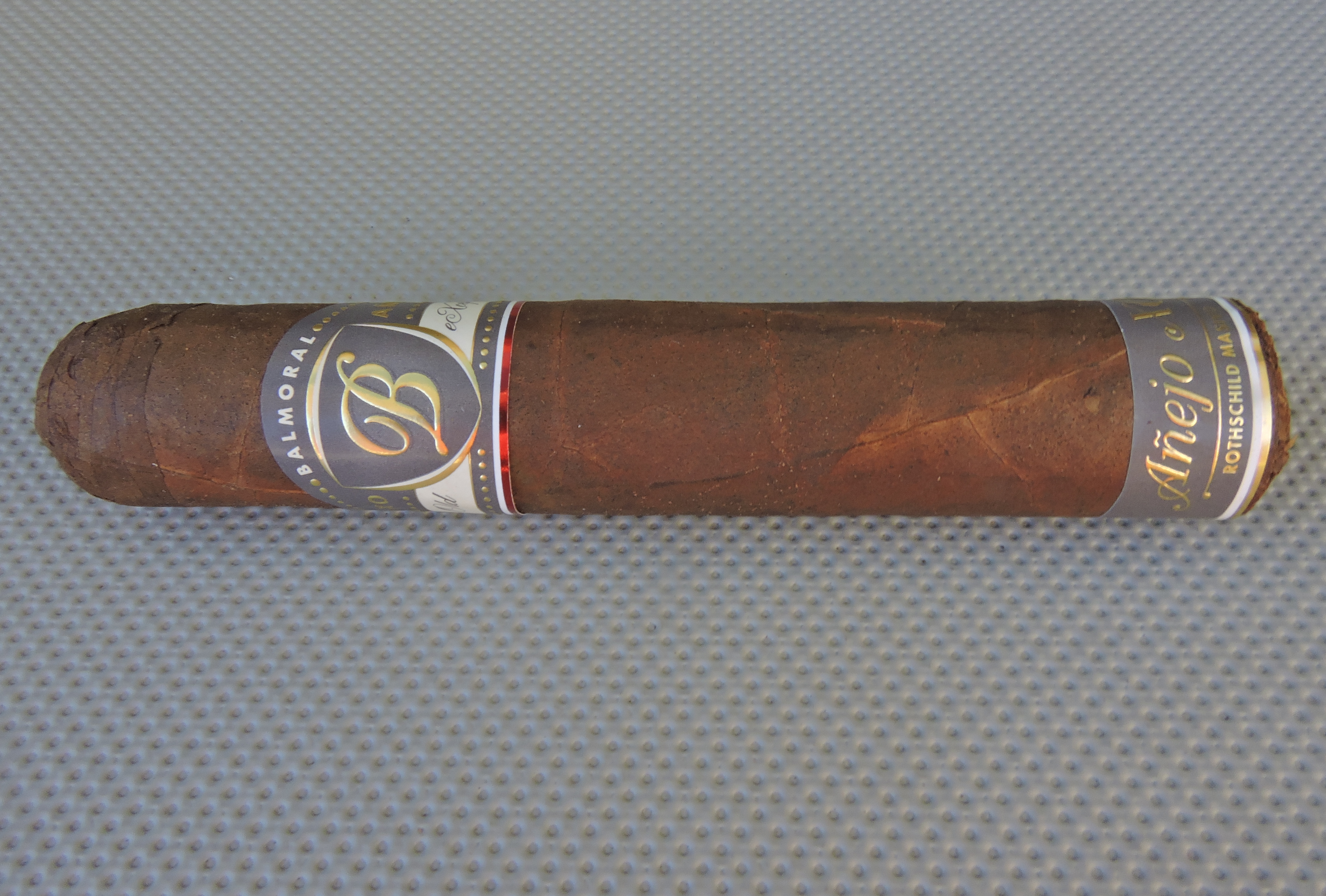 The original Anejo 18 was a limited production that was gated by the availability of a rare 18 year old Brazilian Arapiraca wrapper. In order to continue Anejo a line based on aged tobaccos, Royal Agio has now introduced the Balmoral Anejo XO.  The main difference between the two is the Anejo XO features a different Brazilian wrapper.

Balmoral is one of several brands offered by Royal Agio Cigars in the United States. While the company has brands such as Mohair’s and Panter focused on cigarillo and small cigar offerings, the Balmoral line is the long filler premium cigar offering. As a brand Balmoral traces its roots back to 1895. The name is derived from the Scottish castle that is used by the Royal Family in the United Kingdom today. Balmoral cigars are made at the Dominican Republc. Drew Estate is not known for cigars made in the Dominican and while Royal Agio is a separate company, it still gives Drew Estate something different to their overall portfolio they distribute.

The big change from the Balmoral Anejo 18  is the wrapper as it is not using the 18 year old Arapiraca wrapper from Brazil. The wrapper is still from Brazil. While the remainder of the cigar components of the Anejo XO are similar to Anejo 18, it has not been disclosed if these tobaccos are the same or not.

The Balmoral Anejo XO line is available in three sizes.

The FT stands for “Flag Tail” which is on the cap of the Petit Robusto.

The Balmoral Anejo XO’s Brazilian wrapper has a rich coffee bean color. Upon closer examination, some darker marbling can be seen and depending on how much light shines on it, the wrapper will give off a colorado tint. The wrapper did not have much in the way of oil on the surface. There are some visible veins and some thin visible wrapper seams.

There are two bands on the Balmoral Anejo XO. The primary band consists of a gray, ivory, white, and red color scheme. On the center of the band is a gray shield with gold and white trim. On the center of that shield is large gold cursive-styled “B”. The upper portion of the band surrounding the shield is gray. Above the shield on that gray background is the text “BALMORAL” in white font. To the left and right of the shield on the gray background is the text “AÑEJO XO” in gold font. There is an ivory stripe on the lower half of the band on each side of the band.  On the left and right side of the ivory stripe is the text “Xceptionally Old” in cursive gray font. The far right sides of the band has a smaller version of the gray shield that is on the front of the band – including the gold “B”. The remainder of the band has gold dots across the top and bottom. There is metallic red trim at the bottom of the band.

The secondary band is gray in color. The text “Anejo XO” is in gold font on that background. Below that text is the text “ROTHSCHILD MASIVO” in smaller gold font. There is a gold separator between both lines of text.

As I normally do, I went with a straight cut to remove the cap of the Balmoral Anejo XO Rothschild Masivo. Once the cap was removed I commenced the pre-light draw. The dry draw delivered notes of sweet cocoa, some earth, but there wasn’t much in the way of spice. Overall I considered this to be a very good pre-light draw experience. At this point I removed the footer band of the Balmoral Anejo XO Rothschild Masivo, lit up the foot, and moved on to the smoking phase.

The Balmoral Anejo XO Rothschild Masivo started out with notes of cocoa, earth, and white pepper. The cocoa notes moved into the forefront quickly. There was an inherent sweetness to these cocoa notes. The earth and white pepper became secondary notes, but the white pepper was quite prominent on the retro-hale.

During the second third, I found both the earth and white pepper increased. The earth notes moved into the forefront with the pepper notes a close secondary note. The cocoa sweetness diminished sharply falling into the background.

By the last third, I had found the earth notes remained in control. The white pepper had inched closer to the forefront. Occasionally I could detect some cocoa in the background. This is the way the flavor profile came to a close. While this wasn’t a harsh finish, this was pretty much spice and not much else happening. The resulting nub was firm to the touch and cool in temperature.

Construction-wise, I found the Balmoral Anejo XO Rothschild Masivo to be excellent – and this was reflected nicely on the burn and draw. The burn path remained straight from start to finish. The burn line was also relatively straight. This wasn’t a cigar that needed frequent touch-ups. The ash was a darker salt and pepper color. I found the ash to be on the firmer side and one that came off the cigar in clean chunks. The burn rate and burn temperature were ideal. 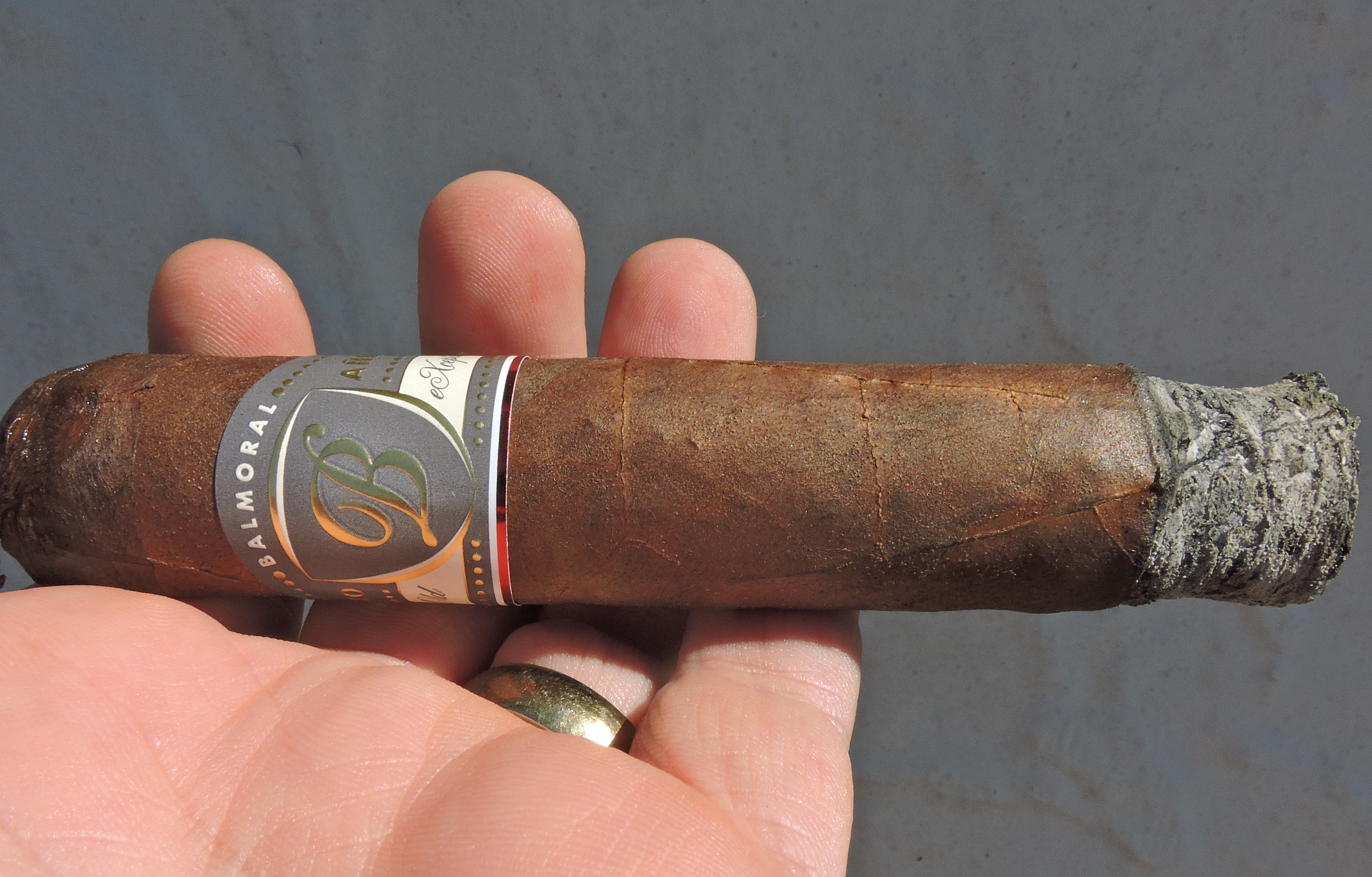 The draw performed quite well. It wasn’t an overly tight draw, but it wasn’t a loose one either. This made the Balmoral Anejo XO Rothschild Masivo a low maintenance cigar to puff on and derive flavor.

From both a strength and body perspective, I found the Balmoral Anejo XO Rothschild Masivo to be stronger and fuller than its Anejo 18 predecessor. This is a cigar that was pretty much medium in strength from start to finish. As for the flavors, I found this to be a cigar that was in the medium to full-bodied range.  In terms of strength versus body, I found the body to have an edge.