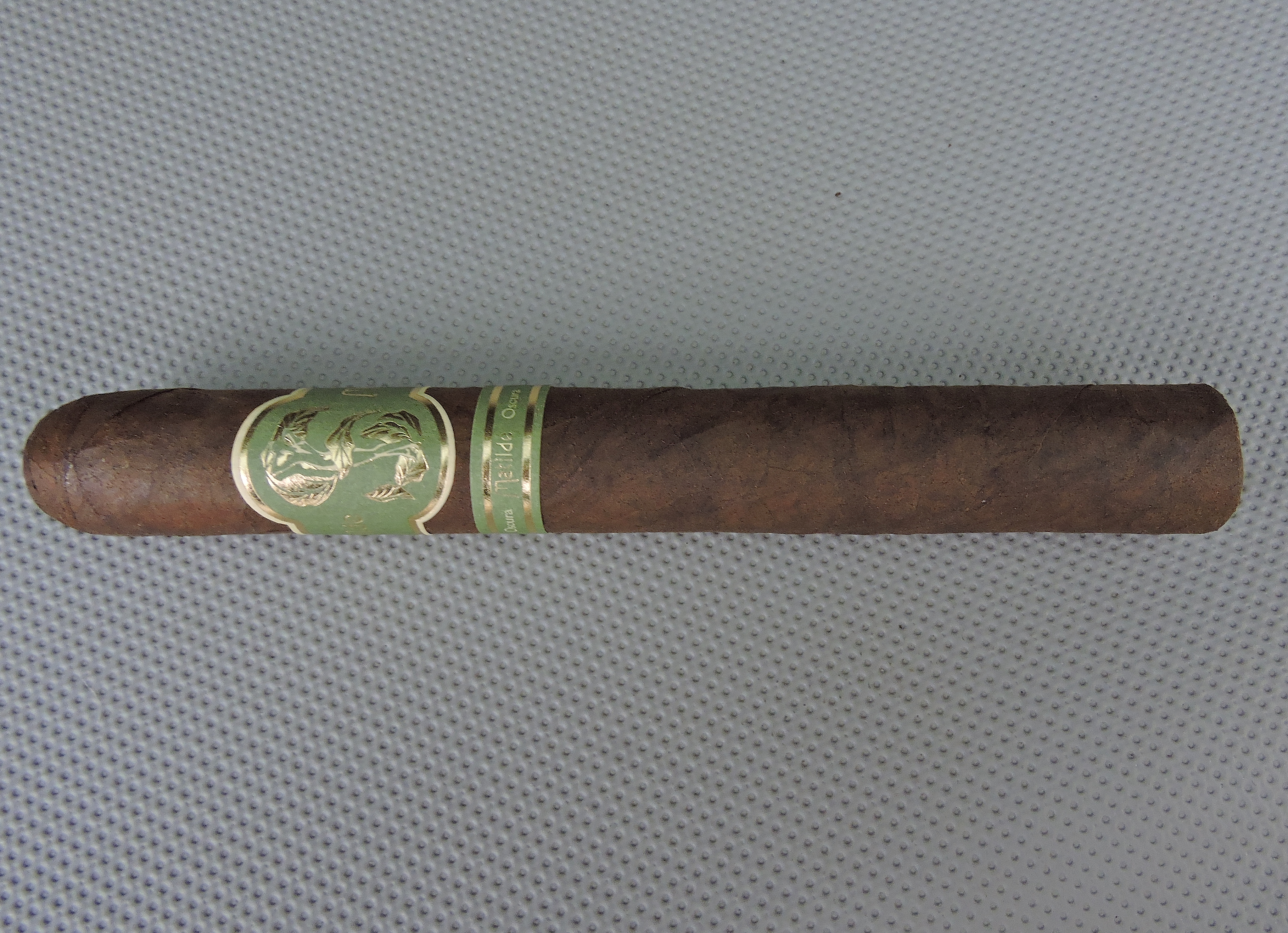 The Matilde Oscura is the second line to be released by Matilde Cigars. Introduced at the 2015 IPCPR Trade Show, the cigar adds an oscuro wrapper offering into the company’s portfolio. Matilde Cigars was launched two years ago by the legendary Jose Seijas and his family. Seijas is best known for his tenure as Vice President and General Manager of Tabacalera de Garcia – maker of Altadis products . In that role Seijas oversaw the production of a factory capable of making 60 million cigars annually. With Matilde Cigars; Seijas has his own factory, Tabacalera La Matilde but now has a focus on small batch production with strict quality standards. Recently I’ve had an opportunity to smoke the Matilde Oscura in the Toro Bravo size. My initial impressions of this cigar was that this ranked as one of the top releases to come out of the 2015 IPCPR.  Now that the Matilde Oscura has been released, this cigar lived up to those initial impressions and ranks as one of the top releases for 2015.

The Matilde Oscura derives its name from its dark San Andres wrapper. It is the follow up to the company’s first line, Matilde Renacer, which was a Habano wrapper offering.  As for the name Matilde, it is an old Dominican brand that was resurrected by Seijas.

Earlier this year, the company announced it was entering into an agreement with Quesada Cigars where the latter would handle distribution for Matilde.

Without further ado, let’s break down the Matilde Oscura and see what this cigar brings to the table.

The blend to the Matilde Oscura is a multi-national blend. The blend itself is very different from the original Matilde Renacer offering.

The Matilde Oscura is packed in 20 count cabinet-style boxes in three different sizes.

Living up to its name, the Matilde Oscura Toro Bravo has a dark mocha colored San Andres wrapper. Upon closer examination, there is some even darker marbling present on the band. The wrapper has a slightly coarse texture with slight oily sheen. There are some very thin veins and most of the wrapper seams are quite thin.

There are two bands on the Matilde Oscura. The primary band has a green background with off-white and gold colored trim. On the center of the band is the gold and white Matilde logo which is an image that appears to be a statue-like image with an “S” shaped leaf design draped over it. To the left and right is the text “Matilde” in gold font.

The secondary band is also green. The text “Matilde” is in gold font on the center of the band. To the left and right is the text “Oscura” in small white font.  There are gold pinstripes on the upper and lower portion of the band.

Before lighting up the Matilde Oscura Toro Bravo, I went with my usual choice of a straight cut. Once the cap was successfully clipped, I moved on to the pre-light draw. The cold draw delivered a mix of cocoa, earth, and a slight cedar component. Overall the pre-light draw to the Matilde Oscura Toro Bravo was excellent. At this point, I was ready to light up this cigar and see what the smoking phase would have in store.

The Matilde Oscura Toro Bravo kicked off with notes of cocoa, earth, and cedar notes. The cocoa notes became primary quickly with the earth and cedar notes secondary. Meanwhile on the retro-hale, I detected notes of white pepper.

As the Matilde Oscura Toro Bravo moved through the first half, the cocoa notes expanded to more of what I define to be a mocha flavor – namely a combination of coffee and chocolate. At times the earth notes also surfaced in the forefront. There was a nice creamy component that added a smoothness to the flavor profile. There were still some subtle cedar notes in the background as well.

During the second third, the mocha notes remained the primary note with the earthy notes now more present in the forefront. There was a slight amount of sweetness with the mocha notes. The cedar and cream notes were still secondary. I also detected a very subtle dried fruit note in the background that added a touch more sweetness. Later in the second third, the cedar notes increased.

During the last third of the Matilde Oscura Toro Bravo, the mocha notes split into more distinct components of coffee and cocoa. The coffee notes were a primary flavor – along with the earth and cedar. The cocoa notes were now in the background. Meanwhile most of the dried fruit and cream notes had dissipated. This is the way the cigar experience came to a close. The Matilde Oscura Toro Bravo was flavorful right until the end. The resulting nub remained cool in temperature and firm to the touch.

Overall I found the Matilde Oscura Toro Bravo to be a well-constructed cigar – and this reflected very nicely on the burn and draw. The burn of the Toro Bravo performed extremely well. The cigar had a straight burn path and maintained a straight burn line. I found this cigar to require less than a normal amount of touch-ups. The resulting ash was silver-gray. The ash wasn’t overly firm, but it wasn’t a loose ash either. The combustion of this cigar was excellent. The cigar maintained an ideal burn temperature and ideal burn rate throughout the smoking experience. 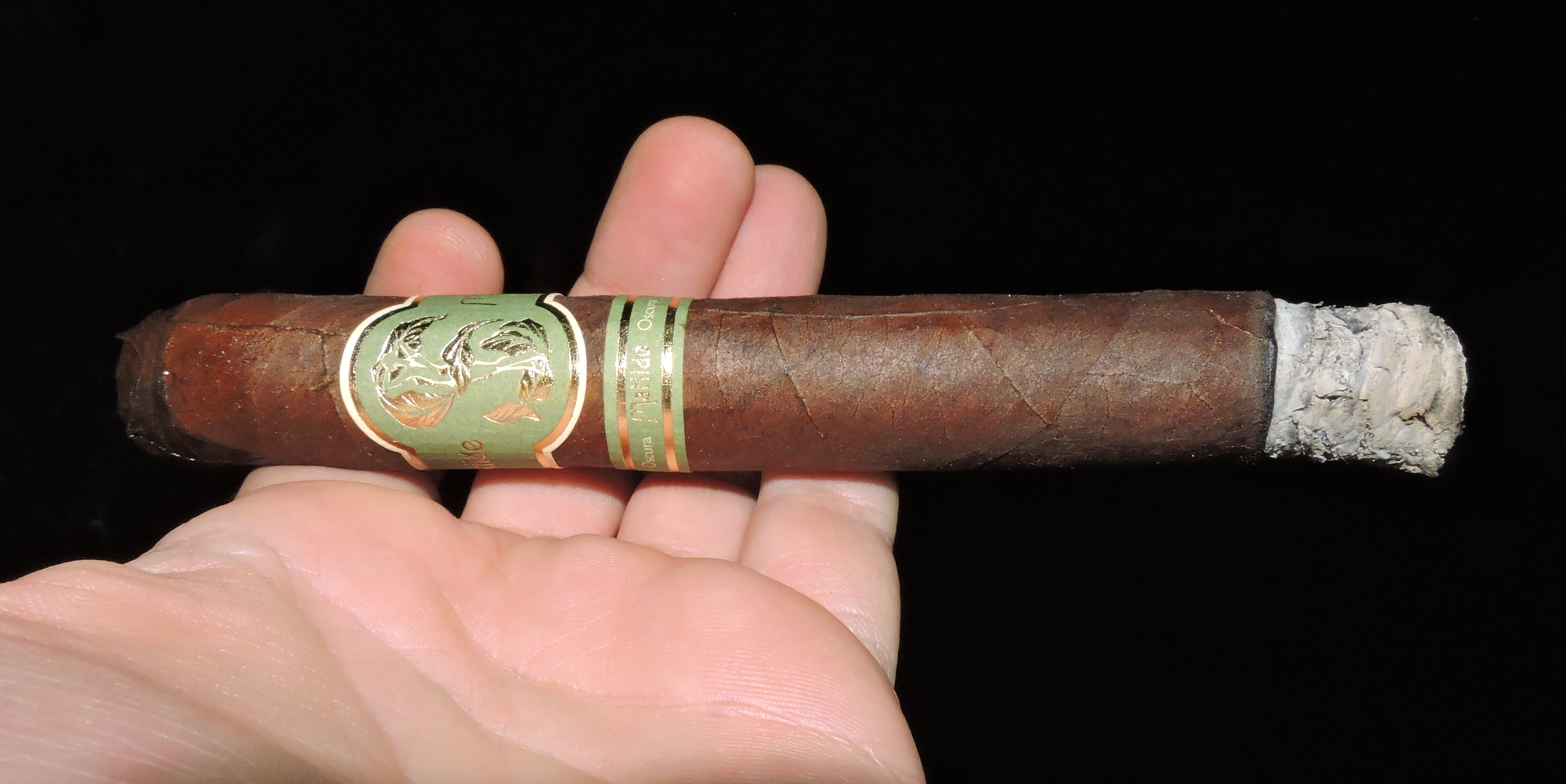 The draw to the Matilde Oscura Toro Bravo was near perfect. It had a touch of resistance – something I really like. I also found this cigar produced some nice level of smoke.

San Andres Mexican wrappers are very popular today. The Matilde Oscura is one of the best blends I have had with this wrapper. Sometimes I find the wrapper can overpower the blend and deliver a pungent (sharp) spice. With the Matilde Oscura Toro Bravo, this was not the case. It delivers some rich flavors and maintained quite a smooth profile. Siejas has been a mastermind behind many iconic brands, but with the Matilde Oscura, he has hit another home run. This is one of 2015’s best cigars.

This is a cigar I would recommend to an experienced cigar enthusiast, but it is one I would not discourage a novice from trying. As for myself, not only is this a cigar I would smoke again and make a part of my smoking rotation, it is a cigar worthy of fighting Chuck Norris for.