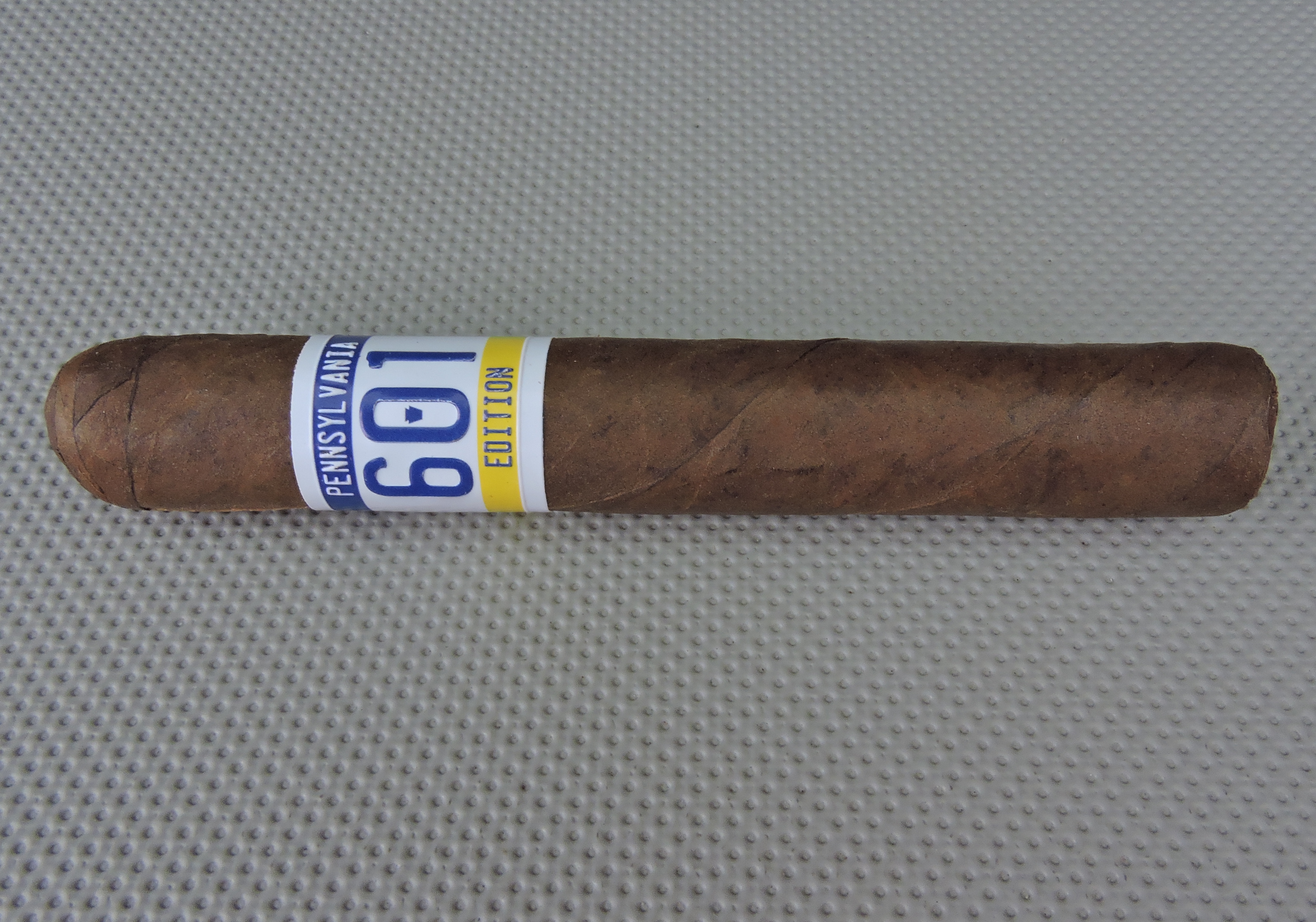 Without further ado, let’s break down the 601 Pennsylvania Edition and see what this cigar brings to the table.

In addition to a leaf Pennsylvania Broadleaf tobacco in the filler, blend incorporates uses Nicaraguan tobaccos from Condega and Esteli. The cigar is finished with a Habano Oscuro wrapper. The cigars are produced at Espinosa’s La Zona factory.

The 601 Pennsylvania Edition is available in three sizes. Each of these sizes is sold in 15 count boxes. 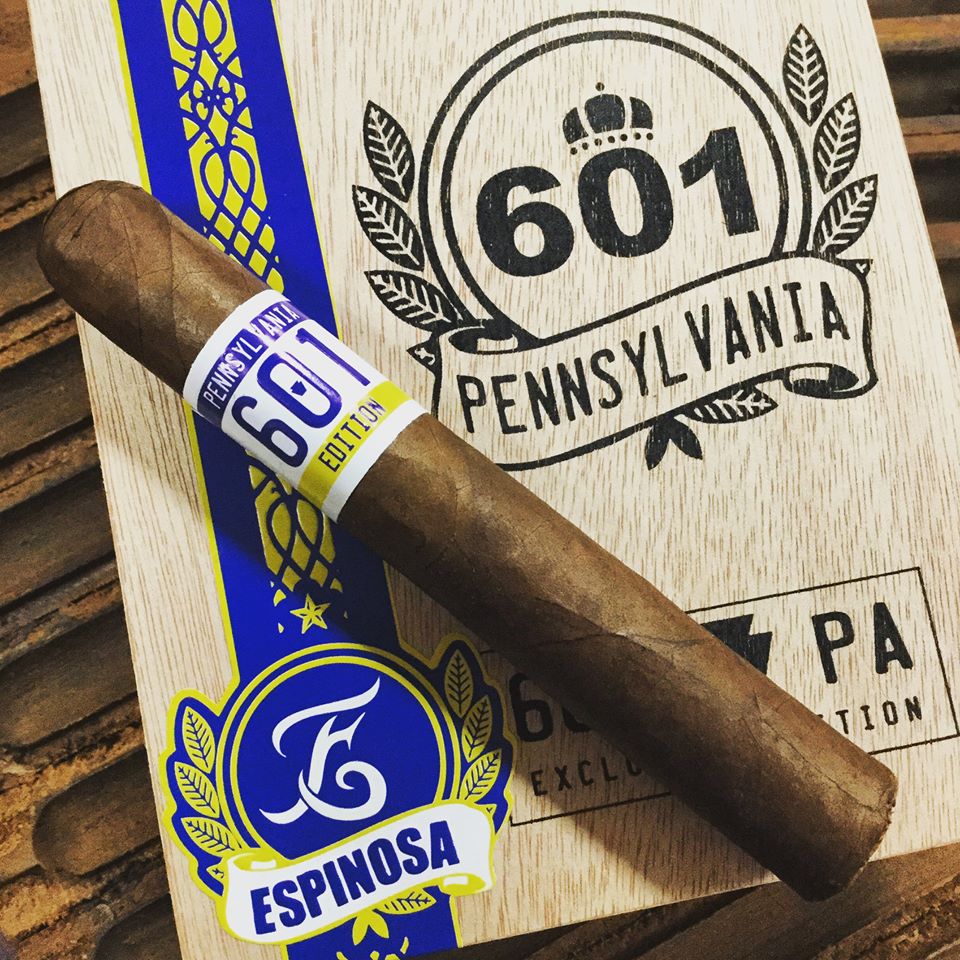 The Habano Oscuro wrapper of the 601 Pennsylvania Edition Robusto had a chocolate brown color. The wrapper itself also had an oily complexion. Overall, while there were some thin visible wrapper seams and thin visible veins, I found the wrapper was on the smooth side.

The band pays homage to the State of Pennsylvania in that it has a similar design to a Pennsylvania State license plate. On the center of the band is a large “601” in a blue license plate font. In the center of the “0” is a small blue keystone. The top of the band has a blue stripe with the text “PENNSYLVANIA” in white font. On the bottom of the band is a yellow stripe with the text “EDITION” in blue font.

Prior to lighting up the 601 Pennsylvania Edition Robusto, I went with a straight cut to remove the cap. Once the cap was removed from the cigar, I proceeded with the pre-light draw. The dry draw delivered a mix of earth, pepper, and lemon citrus. Overall I considered the pre-light draw of this cigar to be excellent. At this point I was ready to light up the 601 Pennsylvania Edition Robusto and see what the smoking phase would have in store.

The 601 Pennsylvania Edition started off with a black pepper blast. Once the pepper subsided  notes of chocolate, earth, lemon, and pepper emerged. During the first third, the earth and chocolate notes became primary notes – with both notes on equal footing. The lemon and pepper notes became secondary. While the pepper subsided on the tongue, it was still prominent on the retro-hale.

By the end of the first third, I noticed the pepper notes now had more of a lingering effect on the tongue. As the cigar moved into the second third, I found the lemon notes diminished. At the same time, I got a mineral component in the background. There was somewhat of a fusion between the lemon and mineral components. While this combination of these two notes were on the subtle side, it kept things interesting and enjoyable with this cigar.

Toward the later part of the second, I found the earth notes took over as the primary note. The chocolate notes moved into the background joining the lemon / mineral combination. While there was an increase in pepper during the final third, it never eclipsed the earth notes as the primary note. This is the way the cigar experience came to a close. The resulting nub was firm to the touch and cool in temperature.

The 601 Pennsylvania Edition Robusto was a well-constructed cigar and this reflected nicely on the burn and draw. The burn path had no problem remaining straight for the duration of the smoking experience. There was a slight curviness on the burn line itself, but it wasn’t enough to warrant any additional touch-ups. The resulting as was quite firm with a light gray color. Both the burn rate and burn temperature were ideal for the duration of the smoking experience. 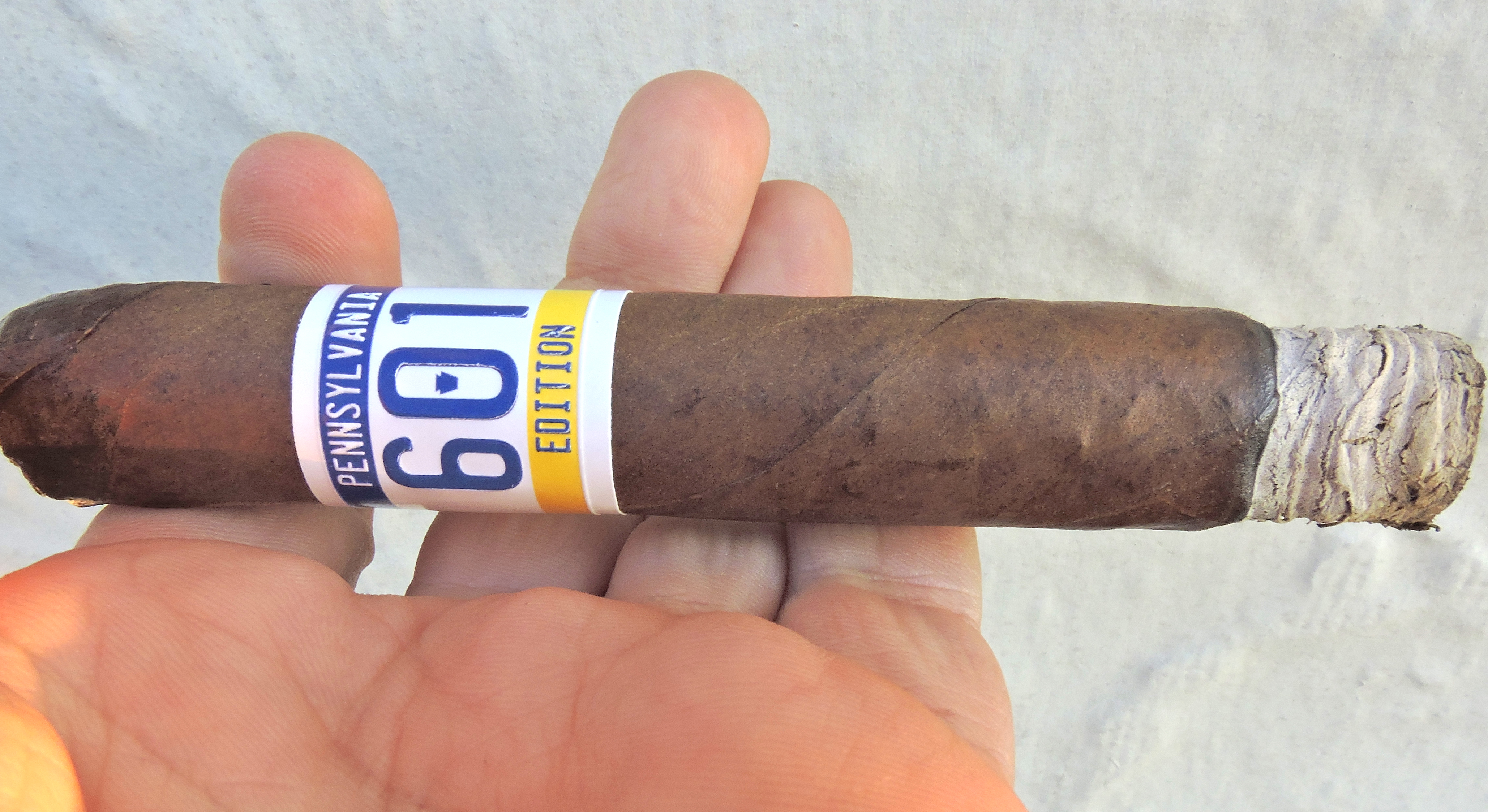 Burn of the 601 Pennsylvania Edition Robusto

The draw to the 601 Pennsylvania Edition Robusto had just a touch of resistance to it – which is something I enjoy on a cigar. This made for an ideal draw throughout the smoking experience.

From both a strength and body perspective, I found the 601 Pennsylvania Edition Robusto to be a medium strength, medium-bodied cigar from start to finish. Overall I found both attributes balanced each other nicely with neither having the edge over the other.

Many times Pennsylvania tobacco is added to a blend for increased strength. With the 601 Pennsylvania Edition Robusto, I was expecting something a little stronger. Instead I got a medium strength cigar – and this was something I found worked quite well with this cigar.

I’ve said a few times that with the flooding of the market with shop exclusives, it has diluted the field considerably in terms of which ones are good. As a result there have been more misses than hits. The good news is the 601 Pennsylvania Edition is one of these hits. I found this to be an enjoyable and well-balanced cigar. While price is not factored into the numerical score, one cannot overlook the price point of $5.33 per cigar – making this a cigar of exceptional value. This is a cigar I’d recommend to either a seasoned or novice cigar experience. As for myself, it’s worthy of a box split and keeping 8 or more of these in my humidor.