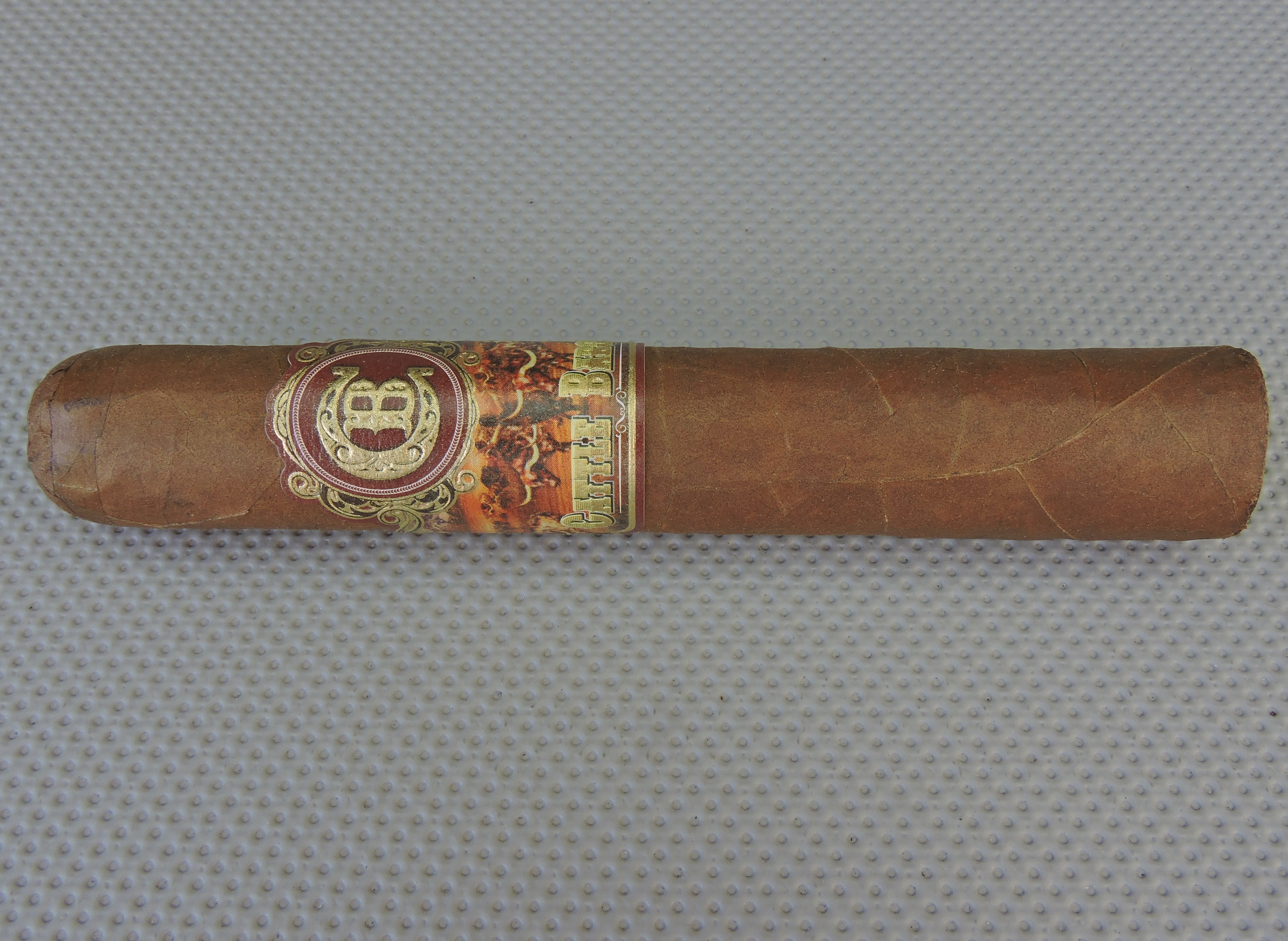 Cattle Baron Cigars is a company launched by cattle stock grower Bryan Mussard out of Montana. When it comes to the cattle industry, Mussard is a well known name. He currently serves as the First Vice President of the Montana Stockgrower’s Association. He also has branched out to other ventures, most notably Gorgeous Vodka – a brand of potato vodka. Now he turns his attention to his own line of cigars. To blend and produce his cigars, Mussard has teamed up with Phil Zanghi of Debonaire House and the De Los Reyes factory in the Dominican Republic. The result is Cattle Baron Cigars’ first titled cigar, the Cattle Baron. Recently I’ve had an opportunity to smoke the Cattle Baron in the Stockyard’s (Robusto size) vitola. Overall this is a very classic smoking cigar, and one that proves to be an outstanding debut for Mussard with his new venture.

Here is the first box of Cattle baron Cigars imported into the US, Signed by Phil Zanghi. It sold for $3,200 at the National Cattlemens Beef Association PAC auction. It was Purchased by the Montana Stock Growers Assn. 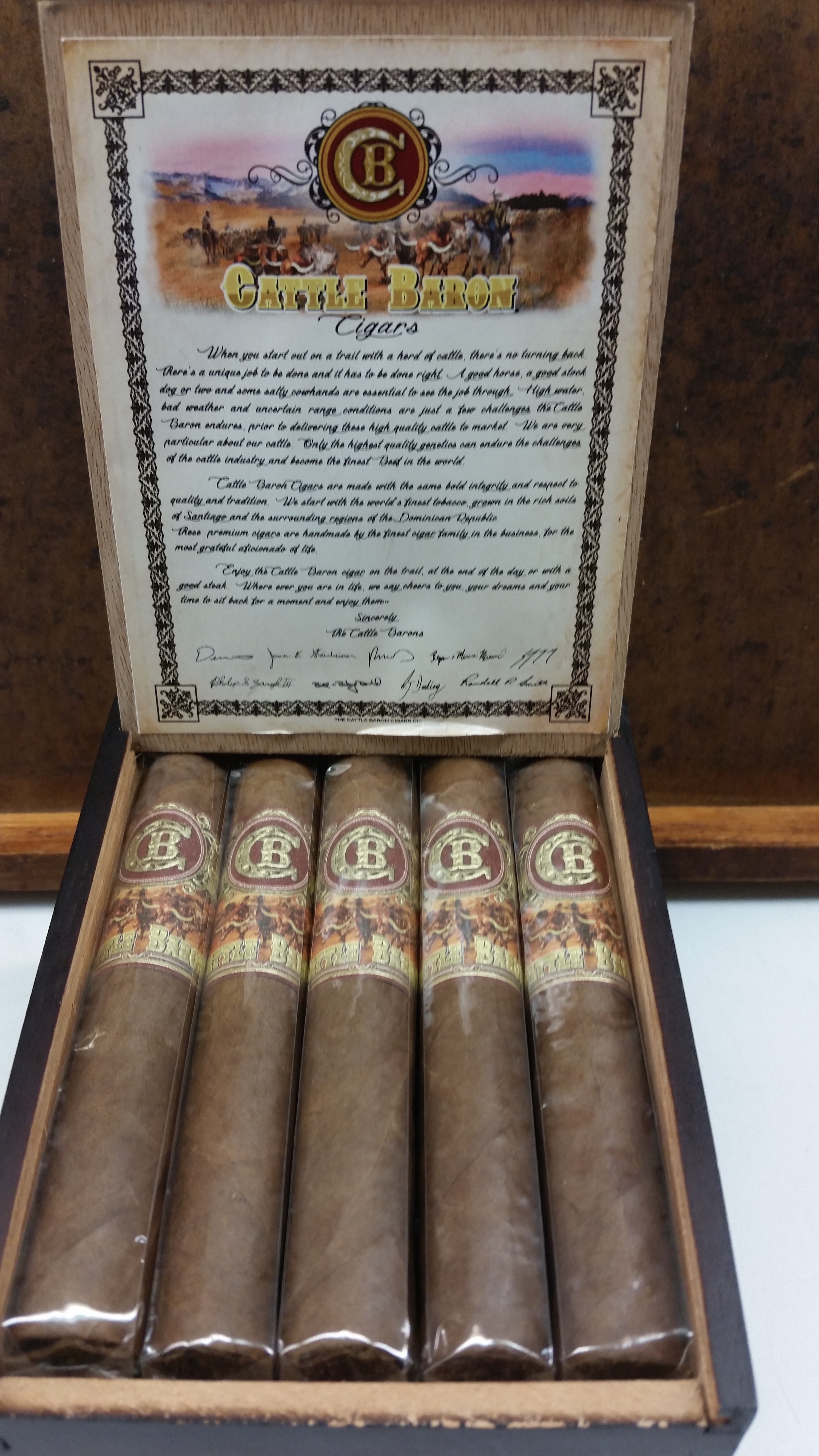 Without further ado, let’s break down the Cattle Baron Stockyard’s and see what this cigar brings to the table.

Cattle Baron consists of a combination of Dominican and Nicaraguan tobaccos highlighted by a Nicaraguan Habano wrapper.

The Cattle Baron is available in four sizes. Each is packaged in 20 count boxes. The vitola names have a theme tied to the cattle industry. 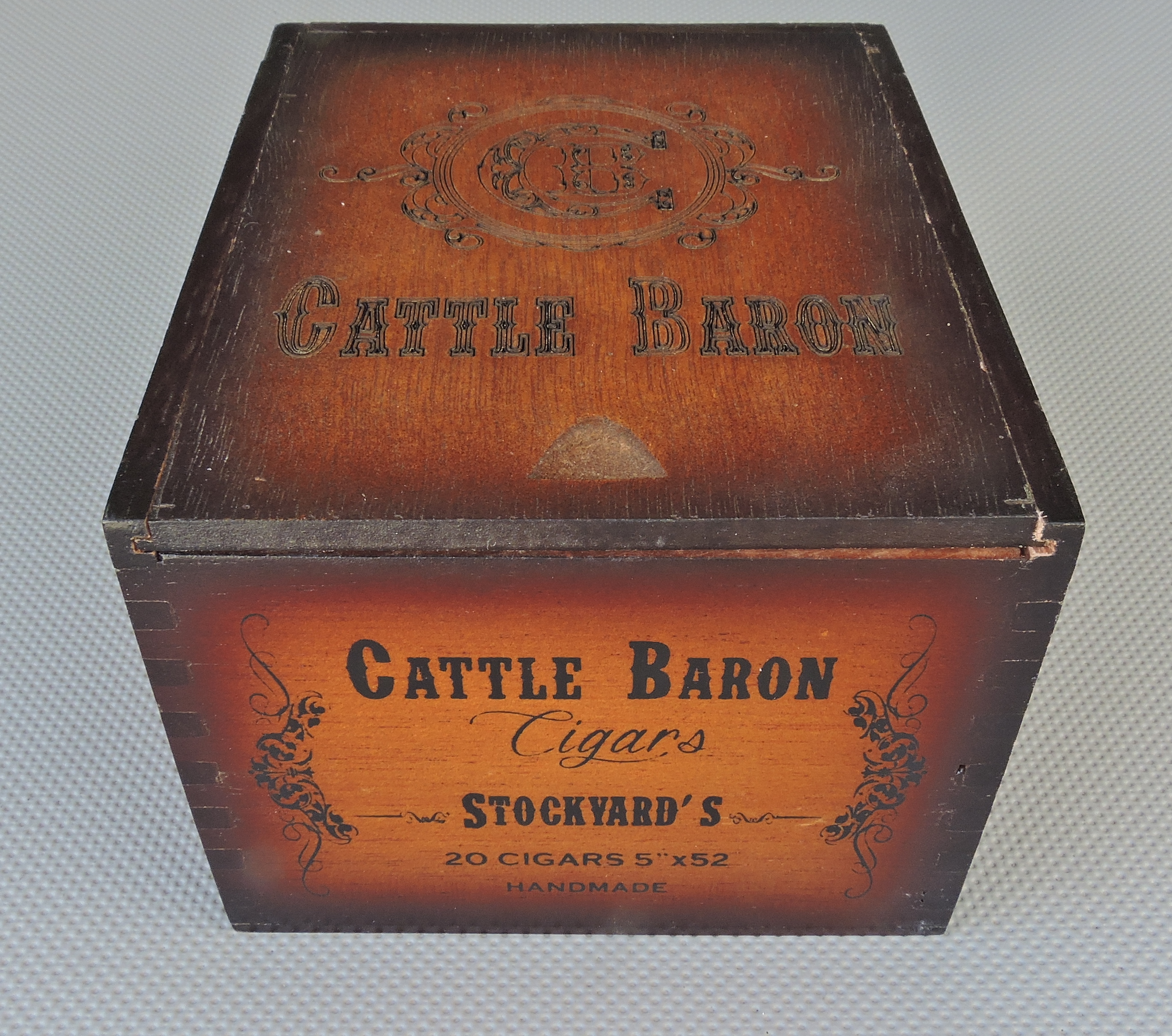 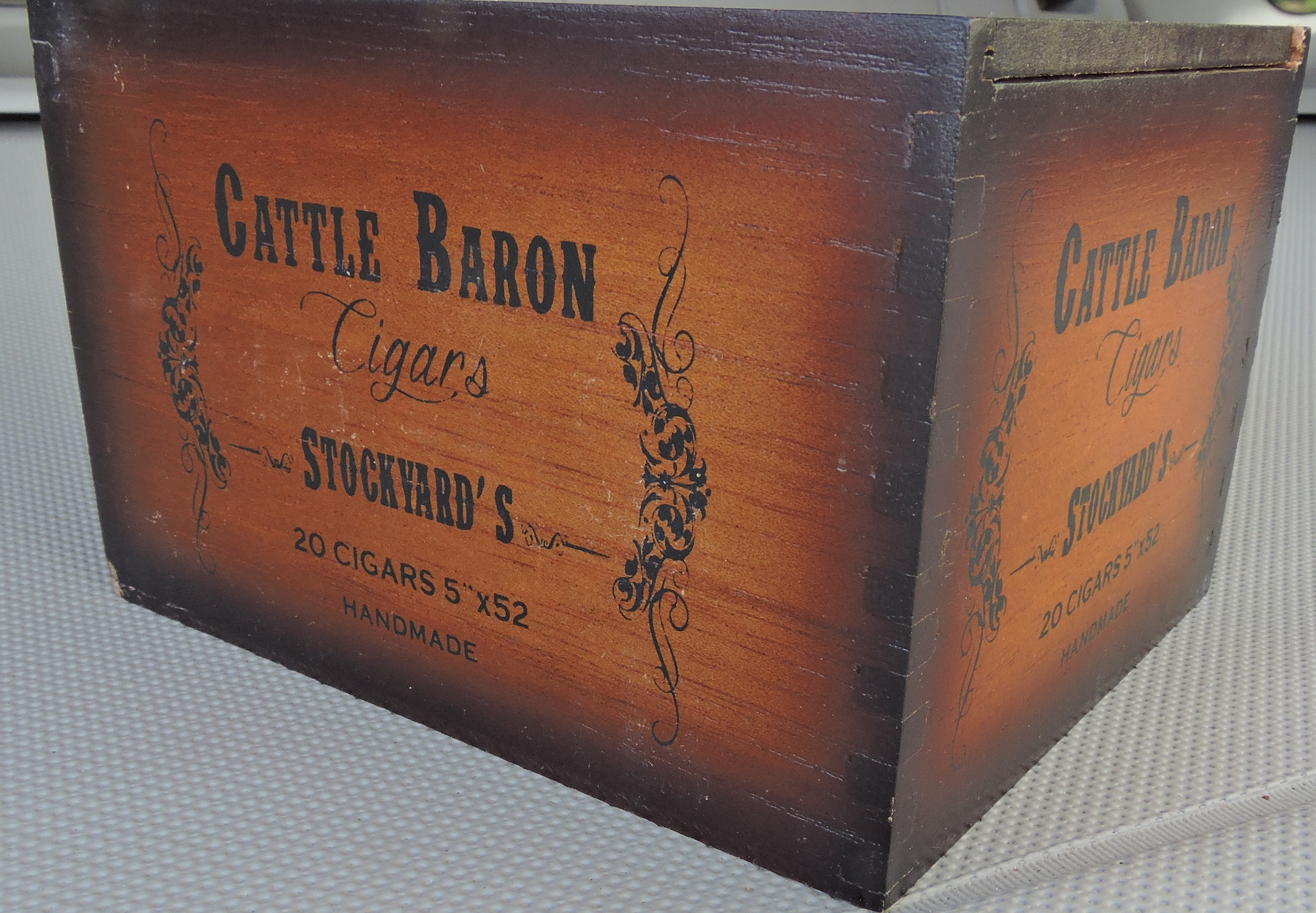 The Nicaraguan Habano wrapper of the Cattle Baron Stockyard’s had a medium brown color. The surface of the wrapper had some oil on it, but it also had a slighty bumpy feel to. There were some visible veins, but any visible wrapper seams were on the thin side.

The band is highlighted by a western style portrait reminiscent of an oil paniting. The lower portion of the portrait has the text “CATTLE BARON” in a western-style gold colored font sitting on top of it. The band has several gold adornments and the edges of the band are trimmed in gold and maroon. Toward the top of the band is a maroon circle. On the circle is a classic-styled gold colored “B”. Surrounding the “B” is a classic-styled  gold colored”C”. On the right side of the band is the text “HAND MADE” in small white font. The far right has another maroon and gold “C B” logo that serves as a band fastener. On the far left of the band is the text “CATTLE BARON” in small white font in landscape mode.

The cigars are packaged in a western-styled cedar box. On the inside lid there some background information on the story of Cattle Baron Cigars. 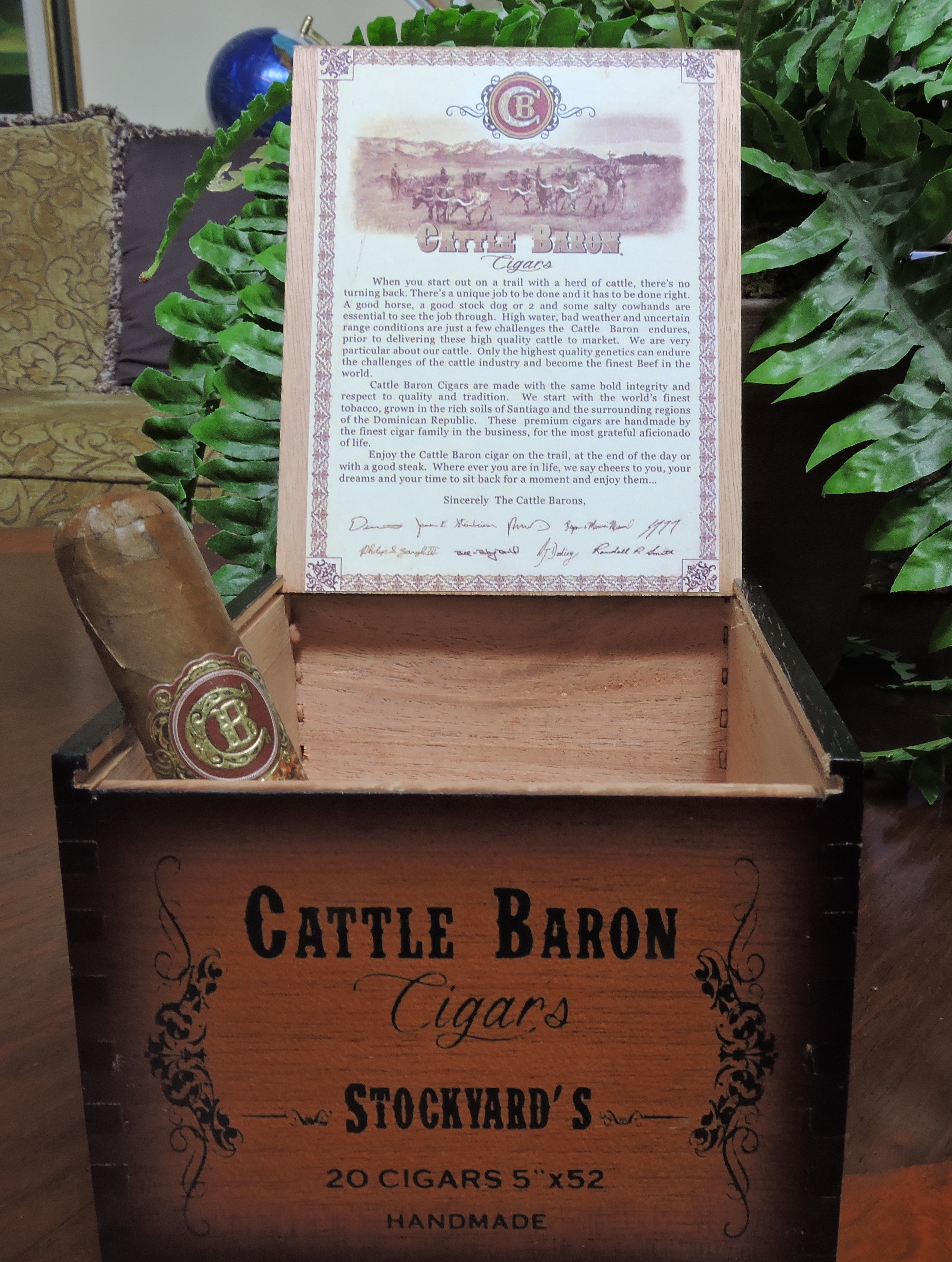 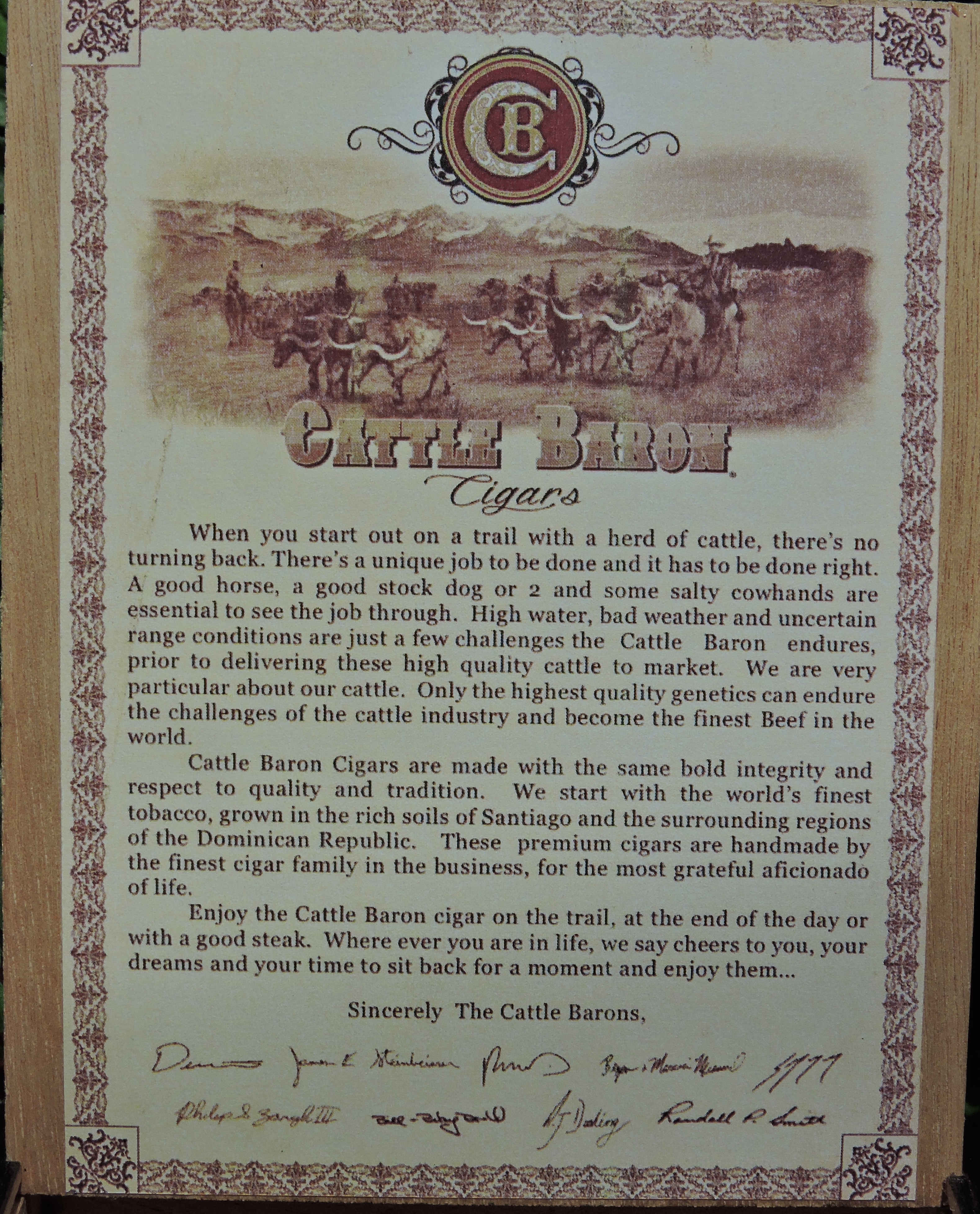 Prior to lighting up the Cattle Baron Stockyard’s cigar, I went with my usual choice of a straight cut. Once the cap was removed, I moved on to the pre-light draw. The dry draw delivered a mix of cocoa and natural tobacco sweetness. There was also a slight pepper note I detected on the tongue. Overall I considered the pre-light draw of this cigar to be excellent. At this point, I was ready to light up the Cattle Baron Stockyard’s and see what the smoking phase would have in store.

The start of the Cattle Baron Stockyard’s started with notes of red and white pepper. The pepper quickly subsided into the background and gave way to notes of cocoa and natural tobacco. In addition, some notes of cedar surfaced in the background. Meanwhile, there was a white pepper component also present on the retro-hale.

As the Cattle Baron Stockyard’s progressed through the first third, the cedar notes moved into the forefront. The cocoa, natural tobacco, and cedar formed a very interesting fusion to the notes. This combination produce a nice synergy among the flavors. The cocoa was also present on the after-draw.

By the second third, there still was a fusion between the natural tobacco and cedar as the cocoa had dropped out of the combination. The cocoa note on the after-draw was now replaced by a red pepper note.

On the last third of the Cattle Baron Stockyard’s there was an increase in the pepper spice, but it wasn’t at the expense of the other flavors in the forefront. This is the way the cigar experience came to a close. The resulting nub was firm to the touch and cool in temperature.

Burn-wise, I found the Cattle Baron Stockyard’s to perform quite well. The visos and seeks in the filler did their job and did it well. The burn path remained straight from start to finish. The burn line was had a slight amount of jaggedness, but this really didn’t warrant any additional touch-ups. The resulting ash was tight and firm with a silver-gray color. The combustion to the Stockyard’s was excellent as it delivered an ideal burn rate and ideal burn temperature. 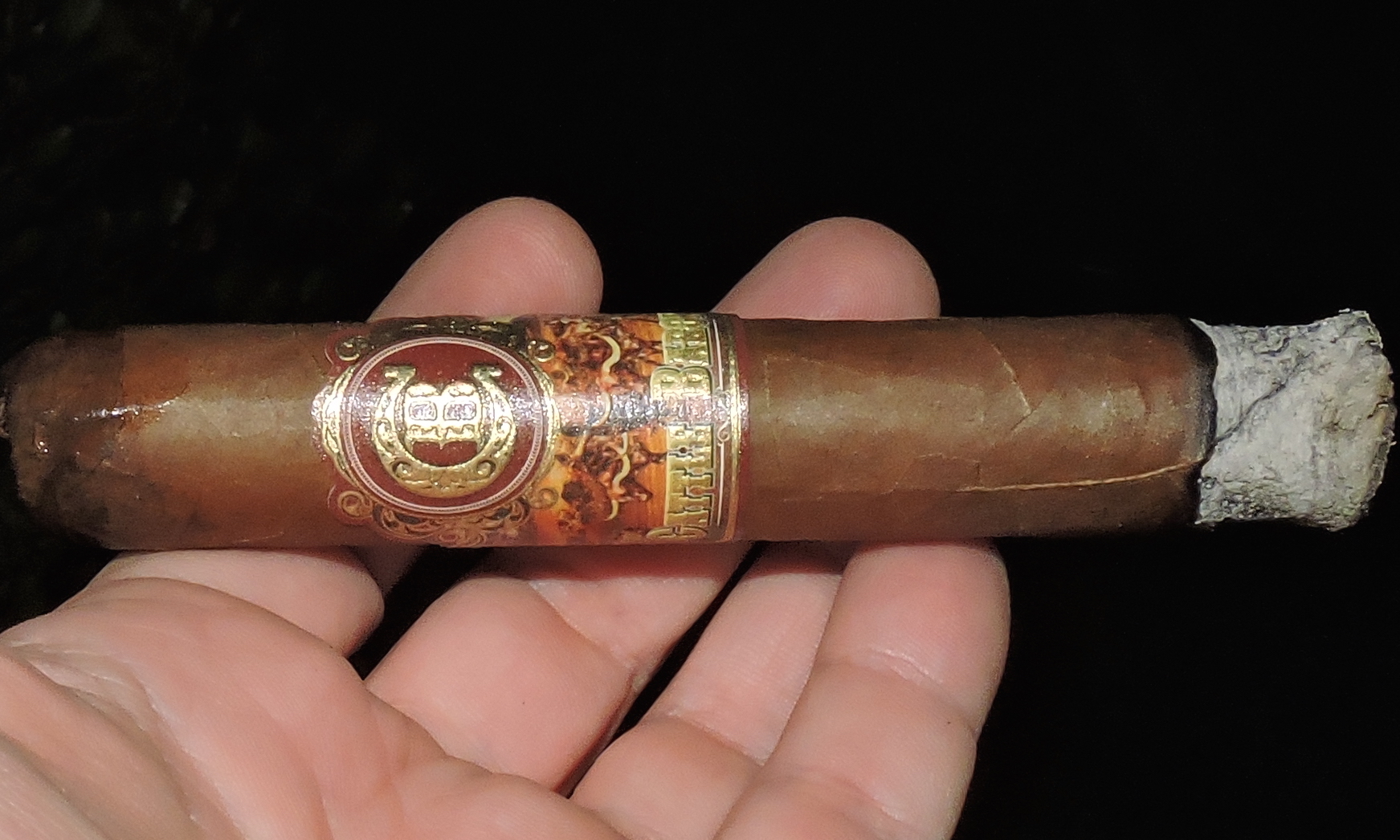 The draw to the Cattle Baron Stockyard’s was not too tight, nor was it too loose. I found this cigar produced quite a bit of smoke along the way.

When it came to strength and body, I found the Cattle Baron Stockyard’s to start out on the low end of medium. Both attributes did increase slightly along the way, but when the cigar experience came to a close I still found this to be a medium strength, medium-bodied cigar. Both the strength and body balanced each other nicely with neither attribute overshadowing the other.

This is a cigar that I would recommend to either a novice or experienced cigar enthusiast. As for myself, it’s a great everyday smoke and one easily worthy of a box purchase.